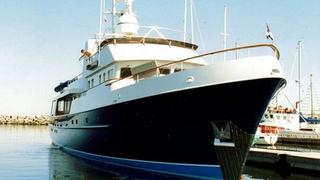 News just in from the Fort Lauderdale office of Yachtzoo that they acted for the American buyer of the 27.4m motor yacht Ma Mu VI with East Coast Yacht Sales representing the seller.

As she wasn't actively on the market, her details are somewhat sketchy, but she was built by Palmer Johnson in 1992 and was asking $3.5 million. Ma Mu VI will now be renamed Hope.