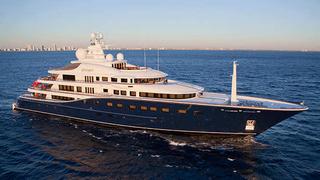 The last month of 2014 ended respectably, with unspectacular but solid numbers across yacht sales, new yacht orders and launches, plus a couple of extremely large superyacht deliveries on the record.

We know of 26 superyacht sales in December 2014, down only slightly on the previous month’s 29, but significantly down on the previous December’s tally of 52. It is worth remembering, however, that December 2013’s figure was an unexpected boom in a month that is usually yields less impressive numbers. The largest yacht in last December’s tally was 85m Cakewalk, the 2010 Derecktor motor yacht, followed by the 66m Vitters sailing yacht Aglaia (now Ahimsa), launched in 2011. Nine of the count were Italian-built and seven were US-built.

Eighteen superyachts came to the market in December 2014, according to our sources, a small reduction on November’s tally of 23 but on a par with the previous December’s 19. The largest was 52m, 1997 Abeking & Rasmussen motor yacht Sea Jewel, followed by 49.7m Nereids motor yacht Azteca II, launched in 2005.

Eleven superyachts hit the water in December, according to our records, up on eight in November and on December 2013’s seven. The biggest was the 60m Benetti motor yacht Formosa, in Italy. The rest of the tally were significantly smaller, the largest being the 34.53m Sunseeker motor yacht known as 115SY, in the UK.

We know of eight superyachts that were delivered to their owners in December, close to the tally of seven in both November and in December 2013. The largest was seriously large – the 140m motor yacht Ocean Victory, built at Italian yard Fincantieri, followed by another impressively sized boat, the 104m Quantum Blue motor yacht built at Lürssen in Germany.