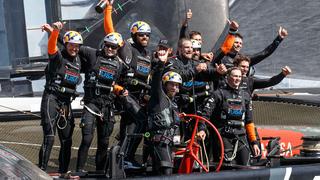 In a story that is as old as sport itself, the closest of team-mates are now the greatest of rivals.

This will certainly be the case in the seas off Hampshire next week as British Olympic hero Sir Ben Ainslie and his home-based Land Rover BAR team start the long journey to win the America's Cup for Britain for the first time in its history when they line up against Jimmy Spithill and his Oracle Team USA.

Australian Spithill has led Oracle Team USA to two consecutive cup victories, most famously including a n amazing comeback against Emirates Team New Zealand in 2013 in San Francisco Bay with Ainslie as a team-mate.

Now, one week ahead of the first races of the Louis Vuitton America’s Cup World Series –the 35th America's Cup cycle - the two fierce competitors are squaring up and rivalries are being stoked.

Spithill, whilst acknowledging Ainslie’s sailing pedigree, said that his winning track record was all as a single-handed sailor. “Playing the skipper in a big team; that’s a big challenge for him.”

However, he welcomed the challenge, describing it as “awesome competition” and saying: “It is about time there has been a team from the UK. And what better time for Ben and the team he has assembled than now?”

Ainslie dismissed Spithill’s single-handed gibe saying that he had spent a large part of his career being part of America’s Cup teams and knew how to build a successful team.

Despite the rivalry the mutual respect is also evident.

Spithill said: “Ben is a really good guy. You meet him on the shore and he’s very courteous, well mannered. On the water though, you flick a switch. He becomes very, very aggressive and he gets the results.”

Ainslie is equally full of admiration for Spithill describing him as “a machine”.

“I sailed with him in the last cup and I was incredibly impressed with how he dealt with being on the back foot, never dropping his head, always believing he could win.”

“The America’s Cup started here in 1851. We’ve had a few shots over the past 164 years but we’ve never come that close to winning. It’s important to us to get that job done now…

“We want to beat Oracle Team USA. No doubt they’re going to be right up there and very, very tough to beat. But we think we have a good shot at it and we’ll have a bit of home crowd advantage.”

Amidst all this talk of the UK-US rivalry, it should not be forgotten that there are four other teams taking part that may well have a say in proceedings.

Emirates Team New Zealand has turned over its race crew to a younger generation, with Peter Burling taking the helm. The first winner of the Red Bull Youth America’s Cup is on fire with an unprecedented string of victories in the 49er class as he simultaneously campaigns for the 2016 Olympic Games.

The man he replaced, Dean Barker, didn’t sit on the sidelines for long. Barker bounced back as the CEO and skipper of SoftBank Team Japan, making its America’s Cup debut in Portsmouth.

And Groupama Team France will be flying with Franck Cammas, the French multihull veteran who has won every race, and broken every record, he has set his mind to. Will the America’s Cup be next?

Sir Keith Mills: How the 1851 Trust will win more than the America's Cup