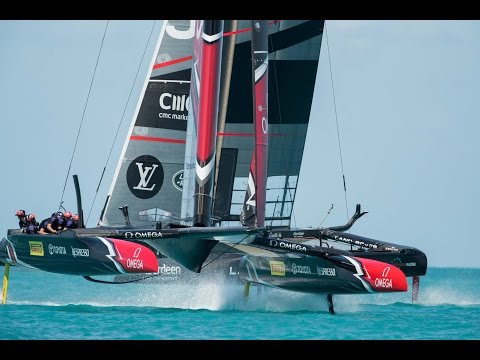 The final week of practice racing for the 35th America’s Cup produced some dramatic scenes in Bermuda yesterday (May 16) after Land Rover BAR collided with Emirates Team New Zealand, damaging both boats.

Ben Ainslie’s team sailed into the aft of the Kiwi team’s portside hull, leading the practice race to be abandoned. Emirates Team New Zealand later released a video showing the moment of the impact:

Helmsman Peter Burling described the British team’s actions as “just unnecessary a week out from the America’s Cup”. “We are all here to learn and it’s a shame we have a pretty big dent now in the back of our nice boat,” he said. “You can definitely see it has punctured right into the cockpit right around where my steering wheel is.”

After assessing the damage, CEO Grant Dalton added: "We know Ben well, he is a good guy but frustration is obviously getting to him and the red mist came down and it's a lot of damage in a time we can't afford it."

Despite the collision, Land Rover BAR expects to be back on the water for today’s practice session. Ainslie dismissed the incident via his Twitter account:

12:04AM - 17 May 2017, @AinslieBen tweeted: Bit of a love tap racing hard with @EmiratesTeamNZ sorry guys and hope you're back on the water soon #AmericasCup

Meanwhile, Oracle Team USA skipper Jimmy Spithill is taking nothing for granted, despite the fact his team is guaranteed a place in the final as the Defender. “I think we've put in more hours than anyone over the last couple of days and we've had some really good racing,” he said. "All the teams are racing hard and we're trying to learn as much as we can from that. I think as a sailing team we still have a heap to do to sharpen up, so getting these hours in has been very valuable."