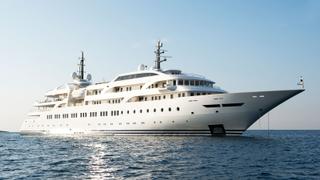 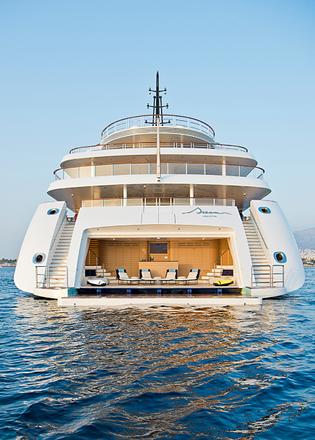 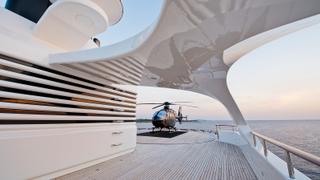 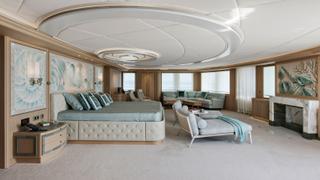 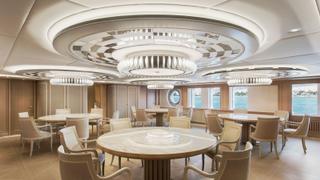 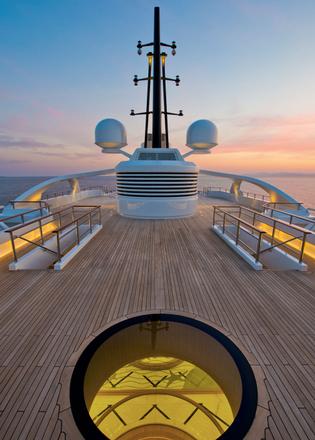 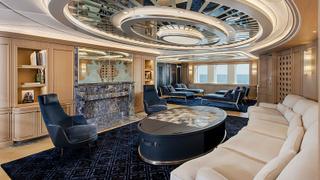 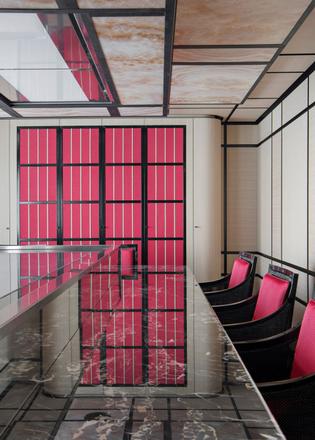 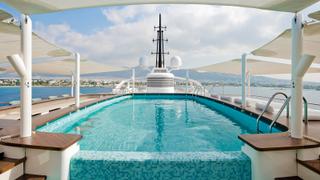 A lifelong Dream: On board the breathtaking 106.5 metre conversion

A life’s goal has been realised with Dream, a 106.5-metre conversion so massive and ambitious in its scale it would have been quicker and easier to start from scratch...

I’m doused from collar to sopping sandal in brine from a wave that has just crashed over the RIB’s bow – and the seascape before us is lively enough to whiten knuckles on grab handles. The côte may look particularly azure in the autumn sunshine but ploughing out of Monaco’s Port Hercule, tenders – and motherships – are bouncing around in an unstately fashion. Our target yacht is about the only stable point on the horizon, which is rather comforting.

As we step on to the broad swim platform and up to the aft deck, feeling a little as if we’ve just been rescued, 106.5-metre Dream towers above us, overwhelming in scale. And that’s just what you can see from the aft deck: there are also two lifts and four staircases for guests alone; a 260-square-metre master cabin, a 400-square-metre main saloon, a cinema and 22 guest cabins; a hotel-sized warren of crew and service areas (where a kindly stewardess tumble-dries my dress); six pantries and more than 270 kilometres of electrical cable powering it all. There are so many enormous decks that the GA takes up two whole pages at the end of this feature.

But then this boat has been a very long time in the making. “In 1953, at the age of seven, while dinghy sailing in the Glyfada gulf, outside my house, I came across the Onassis-owned Christina, the first real superyacht,” recalls Dream’s owner, George J Prokopiou. “I remember approaching the yacht’s stern on which Winston Churchill was smoking his cigar. This image has stuck with me ever since and generated the dream of a large yacht as a world cruising platform.”

Today, like Onassis, Prokopiou can properly be called a Greek shipping tycoon, having founded Dynacom Tankers, the shipping group Sea Traders and LNG transport company Dynagas. He has an engineering mind, extensive shipbuilding experience and his sea legs also extend to his leisure time, with a collection of four large motor and sailing boats – recently adding 69.5-metre Oceanfast Nomad to the collection. He chose to build Dream because “I could not find anything on the market to fulfil my needs and wishes”. He had also met naval architect Nikolas Dendrinos – “We share the same passion for sailing, yachting and the sea” – and they decided they could do something special together.

Dendrinos recalls: “He found this small passenger ship through a friend and he thought it would be a good idea for a conversion project. It was delivered in 1997 – it was doing cruises around the Mediterranean.” Dendrinos, who project-managed Dream, works for Athens-based Olympic Yacht Services, owned by Prokopiou’s shipping company.

Established during the build, it now undertakes the operation, repairs, rebuilds and technical management of all the owner’s boats and plans to take on more clients in the 60-metre-plus range. “The other different thing about this project is that he wanted to build a boat himself,” says Dendrinos. “So this means that we hired a place in a shipyard in Greece and we organised from scratch. We designed, engineered and built everything for this project. We produced internally all the construction drawings for steel, systems, piping, integration and interior sub-constructions. We had subcontractors only for painting and the interiors.”

They also assembled a crack team of workers and designers with a wealth of experience, tapping established Greek-born, Italy-based yacht designer Giorgio Vafiadis to pen the new exterior and GA. Interior designers Simone Ciarmoli and Miguel Queda worked for years at powerhouse fashion brands, including Valentino, Prada and Armani before founding their own interior design firm, Ciarmoli Queda Studio, in Milan in 2009. Ciarmoli notes that making a success of the unorthodox set-up was one of their greatest achievements. “It was not like Lürssen or Baglietto or Azimut. It was us: Simone and Miguel [and Vafiadis]; it was George, Nikolas and his team. And it was a big challenge,” he says.

Given the scope of the conversion this was certainly an ambitious project to tackle independently – the only original elements to remain were the hull and the engine room. So why do it this way? If you’re replacing so much, why not build from scratch? “I do know that he enjoys very much the construction at every stage,” says Vafiadis. “He was going to the yard almost every other day. And he likes to see the things coming. So once you have something existing it is easy to see what is coming – if you start from zero, you don’t see what is coming. Although you see renderings, it’s not like seeing the thing and saying here we do this, there we do that.”

As Prokopiou recalls: “Every evening we had an hour-long phone call with Nikolas reviewing all these [details]. This was a pleasure. I think as much as possible in terms of every detail, because I enjoy having such a good response; giving a small idea and then to see it in a drawing the next day – this is a huge advantage and it gives you the courage to do more things. You just say an idea, and then immediately… improved.”

In this way the mast, the swimming pool and the location of the helipad were all edited during the build. The method may ultimately have worked but he also reflects with frankness on the scope of the conversion.“In hindsight we should have started from scratch given the scale of the rebuild. [It] would have been simpler, faster and cheaper,” Prokopiou says.

The team’s efforts were aimed at some clearly defined goals. For the exterior design, says Vafiadis, “he wanted a classic style and he liked the look of something between a yacht and a ship. He didn’t want anything contemporary.” As Dendrinos puts it: “He wanted to have a classic nautical feel.” In terms of lifestyle, Prokopiou wanted plenty of cabins for family and guests, but also office space for himself and his colleagues, and excellent communications so that they could work effectively – this had to be a yacht he could live on. “The boat is made in a way that several groups of people can enjoy it without interfering one with the other,” says Vafiadis. “There can be a family group on one side of the boat and business people can be on the other.”

Another feature on the list was a quiet and vibration-free interior “even when sailing at full speed in bad weather”. To this end, Dendrinos installed huge volumes of insulation as well as floating walls and ceilings. Also requested were iPad controls (these are everywhere, even in guest cabins) and easy access to the sea for swimming, diving and watersports. For this, as well as a dive store and space to keep rugged tenders and the overhead cranes to launch them, there is a 42-square-metre, 12-tonne stern door that opens on to the sea. There’s also dynamic positioning for dives in protected areas where you can’t drop anchor.

More unusually, Prokopiou requested opening windows throughout, so that a natural breeze rather than air con could ventilate the boat in warm weather. In response, there are 66 opening portholes, 20 manually opening windows and 112 electrically opening windows, 500 kilograms each, 60 millimetres thick, custom made in Germany by Fehrmann and (the electric ones) controlled by iPads integrated to the “infotainment” system by VBH. “I think we have overdone it – in the toilet, instead of four windows opening, one would have been enough!” says the owner. To meet class safety requirements, all the windows are controlled by the Kongsberg Alarm Control and Monitoring System, which monitors them individually. Proximity switches tell it which are open, and they can be closed or locked automatically from the wheelhouse if necessary.

But first and foremost Prokopiou required a large and comfortable living space with balanced design – not too much of a problem with 4,702 gross tonnes to play with and the owner’s wife, Alexandra, on hand for decor selections. The request was for formality, but Ciarmoli and Queda steered away from dark woods. “I said, ‘OK, if you want formality why don’t we think about Marie Antoinette and Versailles.’”

Dream is no confection: their interpretation of this style focuses on decorative wood panelling as well as delicate blue tones and acres of shagreen (invented by Jean-Claude Galluchat for Madame de Pompadour). It’s elegant and restrained – they cite minimalist master Jean-Michel Frank as an influence. But there are also nautical flights of fancy: in trompe l’oeil mosaics of sea creatures, or the insides of lifts decorated to feel as if you’ve dived into the blue.The vast array of spaces that Prokopiou and designers created are uniformly astonishing in scale and detail.

The more unusual ones include an intimate dining saloon set up around a central grill for teppanyaki and decorated in black and red lacquer like a glossy bento box; an owner’s deck that sprawls through a private dining room, office, steam bath, al fresco spa pool, cabins for immediate family and a lot more; VIP cabins in aqua tones with their own drinks cabinets and baths, and which open directly on to broad side decks; a main saloon centred with a ceiling light feature “like an oyster pearl”, says Ciarmoli, above powder-blue upholstery, which flows around to a mirrored bar and ceiling lights that recall abstract fishing nets. Further forward, the towering, multi-deck atrium in marble and glass is the architectural equivalent of a jewellery box, displaying the boat’s grand scale to spectacular effect.

Supporting all this is some serious tech. The wheelhouse has been rebuilt with an integrated bridge that allows the captain to watch and control the engine room and all systems, as well as monitor CCTV and night vision cameras. There’s also a sophisticated cruise-ship-style fire alarm system with a display to show the status of fire doors and temperature of all areas – and there are vertical escape routes from all compartments. “[Below decks] we stripped the engine room and rebuilt the engines and the generators. We have very good engines and generators,” says Dendrinos.

Aside from that, as he puts it, “everything you see on the GA is new”, and the bow, stern and all of the superstructure are new steel constructions. Under the waterline are controllable pitch propellers with independent rudders, a bow thruster and zero speed stabilisers – all super-sized, since Dream is one big boat.

Unusually for an owner, Prokopiou is also excited by the least glamorous kit on board. “It is interesting to see the kitchen, the refrigerators, because this is the heart of any ship. I have been to tankers, bulk carriers and LNG carriers, so I have seen a lot of the shipyards,” he says. But his favourite space on board? “The diving centre with all its toys and diving gear,” he says. “I like this space because it opens up to the sea and provides the perfect place for enjoying swimming, diving and watersports. It is the centre of the boat during the summer months.”

It’s easy to imagine Prokopiou whiling away an afternoon here, rightfully satisfied with the superyacht that he has created in his very own way. Perhaps he might even spot a small boy in a little dinghy in the distance, conceiving his own dream.

First published in the February 2019 edition of Boat International.