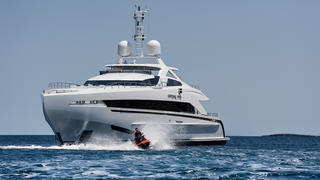 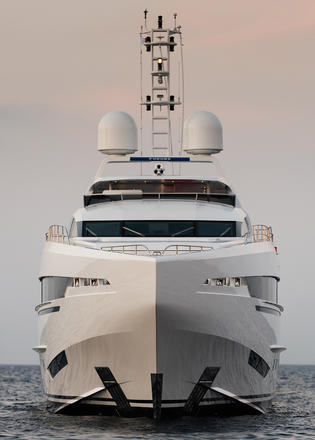 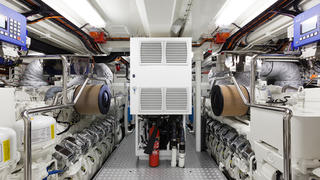 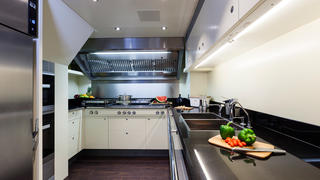 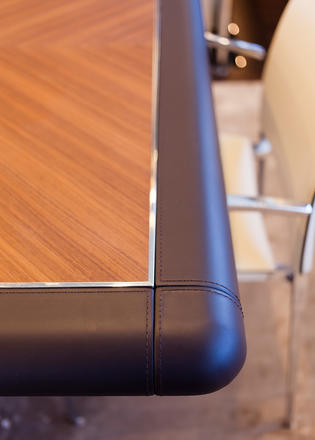 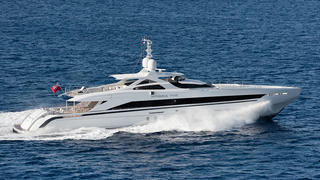 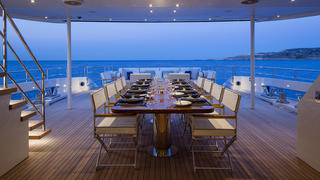 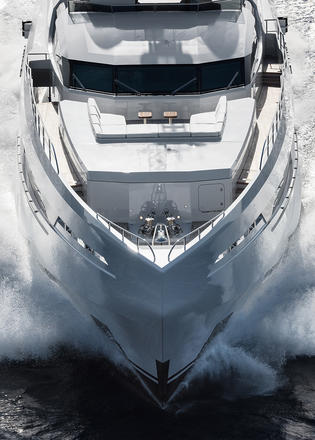 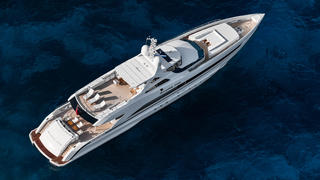 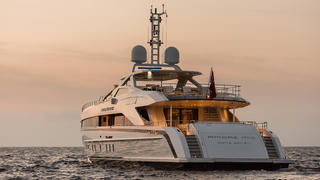 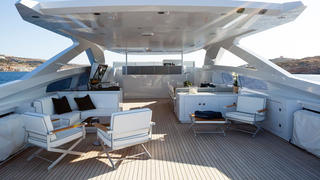 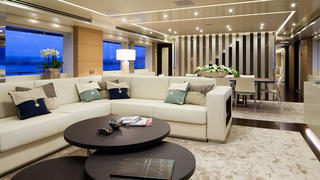 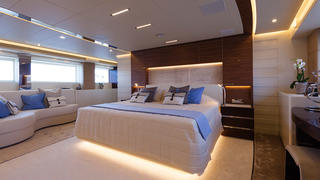 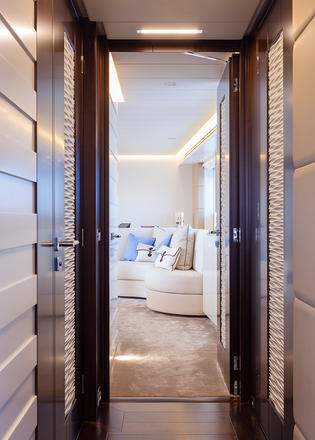 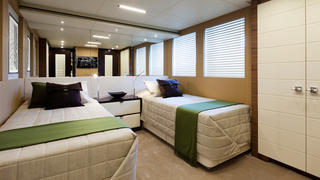 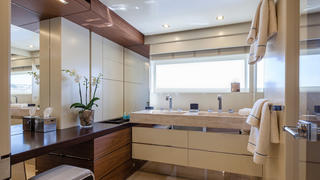 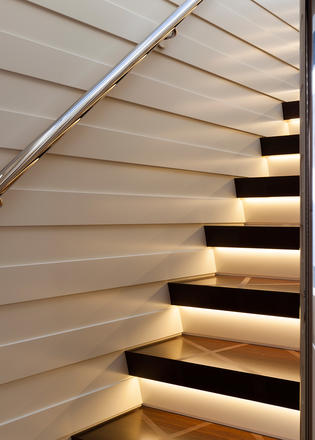 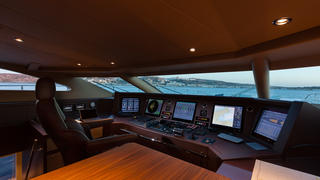 The rewards of delayed gratification can far outweigh the frustrations, something that the owner of Heesen’s custom-built aluminium 45 metre Amore Mio learned firsthand. Just as the serial yacht owner was due to take delivery of another Heesen yacht, 40 metre Galatea (now called Taurica), an offer came in that was too good to refuse. He sold the 40 metre and found himself at square one and boat-less, a frustrating position for any yacht owner.

Luckily, there was something ready on the shelf at Heesen. The Dutch builder’s first ever 45 metre sportster, then known as Project Necto, was a year into build at the yard. Started on spec, all the aluminium — hull, deck and bulkheads — was finished. Taking the financial gains from the quick sale, he turned his 40 metre into a 45 metre.

“It’s a great stage to come into a build, because you save all the time it takes for that rough construction process, as long as you like the general layout — and we did, the owner loved it,” says Amore Mio’s Captain Tripp Hock, who has worked for the owner on various builds, including multiple Heesens, for 16 years. The spec-built semi-displacement 45 metre motor yacht was at an ideal stage for the owner to come along and put his stamp on her while not having to wait too long to enjoy her.

What he had on his hands wasn’t just any Heesen, but a unique blend of high-performance and long-range capabilities, bold exterior lines and a layout that put a priority on outdoor living. The latter was perfect for this owner, who was looking for a summer house on the sea, to be enjoyed by the family and used for outdoor fun, with a bulging toy box that far exceeds what you’d find on other yachts of similar size.

Amore Mio might be the first Heesen of her kind, but she has a strong familial heritage. Designed by regular collaborators Omega Architects, who have penned more than 90 designs for Heesen including concepts and builds in progress, that’s no surprise.

“We combined the comfort of a three-deck yacht, like 42 metre Alive, with the sportiness of a raised pilothouse yacht like 40 metre Galatea,” says designer Frank Laupman of Omega Architects.

“Furthermore, Alive’s exceptional bow was used as inspiration.” The result is a 2.5-deck yacht, as Laupman describes it, with aggressive exterior styling, dominant knuckle bow and bold angles. Family likeness aside, Amore Mio has no problem standing out amongst her kin.

“This is the next generation,” says Laupman. “The sporty rocket-style exterior with chiseled lines and the long hard chine forward emphasises her sharp and edgy appearance.”

Laupman used window placement artfully and expressively in Amore Mio’s exterior design. The bridge is set between the main deck and superyacht sundeck, with wheelhouse windows wrapping around like a heavy black brow. “The upward curving glass windows give her the character of an open sportster,” he says. “They were created from three straight windows instead of five — beauty goes with functionality, non-curved glass prevents distortion and offers a less obstructed view.”

The main deck glazing that looks like one continuous swathe of glass stretching from master to aft deck is, in fact, two distinct sections that parts midway on the side decks, marking the path to the bow and the entry to the crew quarters on the port side. The bulwark is lowered to encourage excellent views from inside. Amore Mio’s hewn lines and a black stripe along the bulwark flow all the way back to the gently sloping transom.

Amore Mio is one of those boats that looks fast when she’s sitting still. Powered by twin MTU 16V diesel engines, she packs a punch to match her energetic exterior profile, reaching top speeds of 30 knots. Sitting up top at the open helm on the sundeck when she’s moving at speed, it’s evident that Heesen’s largest sports yacht to date is designed for performance. She’s also intended for longer-range excursions, with a range of a 2,750 nautical miles allowing her to pootle around the Med or cross the Caribbean without having to fill up the tank.

However, Amore Mio’s owner has spent most of his time since taking delivery bobbing off Malta and using his summer home at sea as intended. The owner arrived on the build scene at the point where it wasn’t too late to change a few things he wasn’t in love with, such as the superyacht spa pool and bar on the flybridge. The owner preferred to rip these out for more deck space where he and his wife could roll out their yoga mats, part of their daily routine when on board. As far as the owner is concerned, what’s the need for a spa tub when the sea is right there?

Instead, the toy box is ample, with everything from Seadoos to flyboards and high-flying towables to stand-up paddle boards. A 5.9 metre Boesch mahogany tender is stowed in the garage. The 90 square metre sundeck seems massive without a spa to clutter the way. The hardtop shades an al fresco dining table and teppanyaki grill station.

“The exterior spaces are vast for a 45 metre boat,” says Captain Hock. “I think it’s smart; minimise the interior to what you need, and all the emphasis goes to the beautiful outdoor space, massive sundeck, great aft deck for a 45 metre, having both a dining table and a separate aft seating area.” There’s also a bow seating area, with a sofas and sunpads.

While the priority is placed on the exterior, there isn’t any skimping on the interior with a total of ten guests accommodated. The forward main-deck owner’s suit is full-beam and has a dressing room and bathroom with tub. The lower deck arrangement is traditional but ample, with two equally sized VIPs and two twin guest rooms. Space is intelligently used — by creating a smaller lobby on the lower deck, 6.5 square metres were able to be saved and redistributed amongst the guest rooms.

The elegant interior is designed to match Amore Mio’s beach house purpose, as interior designer Cristiano Gatto tells it. “The owners arrived on the project in quite an early stage, and we developed the colour board and the material selection in close collaboration,” says Gatto, of his fifth collaboration with Heesen. “[Amore Mio’s] designed to be contemporary but without the modern trappings of cold, impersonal interiors.”

Gatto’s interior is all about consistency and harmony, with a subdued palette, linear shapes and round edges all meant to convey softness and warmth. Calnetto walnut and white lacquered wood blend with leather, parchment stone and steel details, while cushions and throws in blue, green and red provide pops of colour.

The simple interior design belies her many nuanced details. “Take a look at the dining table edges,” says Gatto. “The table corners are four half spheres of leather whose stitching has been executed manually by extremely skilled artisans. And all marble surfaces on board Amore Mio come from a single block of Breccia Sarda. What I’ve tried to do with this project is to make consistency and coherence win over complexity.”

A special feature is the guest staircase set abeam in the main saloon. Topped by sliding glass at its apex on the bridge deck, there is an atrium affect with light filtering into the living spaces below. The superyacht staircase is fronted by a wall of floating walnut beams supported by polished stainless steel columns and sanded glass, all giving a further illusion of height and openness, and adding a wow factor to the dining room.

The layout is planned so guests and crew avoid collision, with this separate guest staircase leading from the lower deck through the main deck saloon to the sundeck. The separate crew stairway is placed forward, creating an easy thoroughfare from the crew accommodation, past the galley and through the bridge to the top deck.

Based on his years of experience, Amore Mio’s captain added in his own innovative solutions and storage requirements. He points out panels that move away to reveal storage where you’d least expect it. One interesting feature he promoted is a bespoke man-overboard system. When such an incident occurs, a life-saving device is instantly deployed to the victim in the water while the spot is marked and tracked via GPS so the captain can easily find them. It’s a safety measure that’s sure to assure a family cruising with young children.

Combining high-performance, long-range capabilities, expansive outdoor living and singular style, it’s easy to fall in love with Heesen’s new 45 metre aluminium motor yacht. So will Amore Mio see sisterships in the near future? While the aluminium 45 metre was started with the intention of being a series, the builder may be looking to even larger yachts for its spec-built offerings and a second hull isn’t yet in the works. But any would-be Heesen owner could certainly order this hull. Or for those to hate to wait, they could buy Amore Mio herself.

Her owner’s love affair has been on the passionate but short side. After only one season enjoying his summer house on the sea, Amore Mio is offered up for sale as her owner is already looking ahead and building his next — and bigger — yacht with Heesen. Once again, he’s choosing to delay gratification for greater rewards.