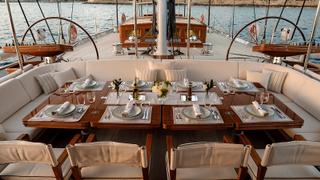 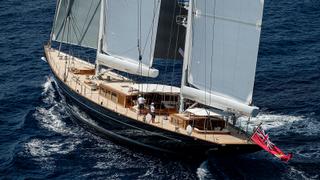 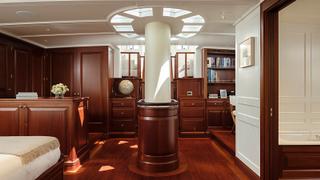 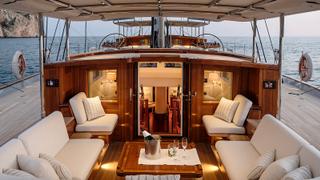 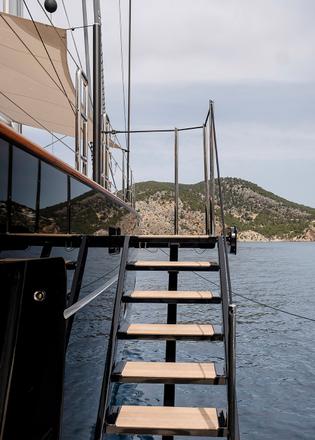 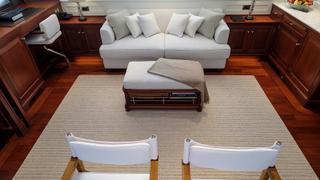 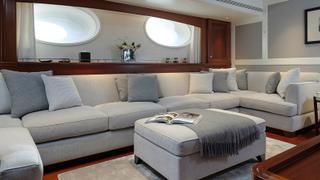 It wasn't long after Aquarius’ owners signed for the 56 metre Royal Huisman classic sailing ketch in December 2014, that her designers were handed an “exceptionally clear” owners’ brief. The yacht, it instructed, should be just as well suited to Bucket regatta racing as it to round-the-world family cruising. The hull should be “visually very attractive” with a “classic” interior that was “not too busy or fussy but calm and elegant”. And at the heart of this brief was the utmost importance that Dykstra Naval Architects and interior designer Mark Whiteley Design “fully understood what it meant to be a modern classic.”

“We didn’t want a yacht that looked like a pirate boat,” the owners’ project manager Godfrey Cray explained. “We wanted a chic and clean modern yacht with classic lines.” This line in the sand “provided an important benchmark to assess or reject proposals,” Cray said. “When in doubt, take it back to the brief and wherever you can, de-bling it.”

This back to basics ethic was adopted immediately by senior designer Erik Wassen, who led the project on behalf of Dykstra. Uncluttered deck space was key and in direct contrast to the Royal Huisman built, Dykstra designed yacht Meteor, which had attracted the owners’ eye for interior design. While Meteor’s exterior design allowed for ample bulwarks to facilitate the hiding of “deck features and fittings,” this approach would not work for Aquarius, Wassen explained. “The elegant lines we had drawn for Aquarius demanded no more than a foot rail and the owners immediately understood that you can’t hide anything behind a foot rail, so we’d better keep it clean.”

A decision was taken early on to build full size mock up constructions of specific spaces onboard Aquarius, including the main deckhouse, cockpit and owners’ suite. This allowed both Wassen and Whiteley to walk around the potential layout of the yacht and get a sense of the space. The experience turned out to be crucial in deciding the final designs for both the interior and exterior. Wassen described the mock ups as “especially helpful” in creating an uncluttered deck space as well as “ensuring the layout and ‘feel’ worked as well as intended.” It was indispensable too in deciding the final interior arrangement, specifically solving “the disconnect between the owners’ suite and aft deckhouse”, which Whiteley said was the biggest challenge he faced throughout the design process.

“It made an enormous difference in perfecting the details,” Whiteley said. “In the case of the owners’ suite, it certainly led to changes in the overall layout. It also enabled us to resolve whether or not to install full-height hanging wardrobes. The mock- up clearly demonstrated that the latter was by far the better option.”

Cray added that at times the mock-ups negated the need for further discussion by demonstrating the best overall option for the design outright. “An example of where a mock-up really proved its worth was in a debate over an accommodation area where we needed to choose between an open plan layout or closed plan layout with additional walls. It seemed the pros and cons were evenly matched and hard to resolve, but as soon as we had the mock-up, everyone knew it had to be open plan,” he said.

While Aquarius’ owners shunned the exterior design of the Royal Huisman built sailing yacht Meteor, the yacht become a stand out source of inspiration for Aquarius’ interior design and created an “established sense of direction” for Whiteley. “The owners were attracted by the general traditional feel of her interior and the way Dykstra had evoked her traditional heritage,” he explained. As a result, Whiteley steered towards a design inspired by tradition but “much more modern.” “A light and contemporary classic feel rather than a more sombre and historically referenced one,” he said.

Two initial concepts were drafted; the first was fully panelled and dark while the second paired mahogany furniture with panelling and white wall space. The owners plumped for the second option. Once this was decided, Whiteley went about deciding on the fabrics and materials that would invoke “a calm, clean and relaxed aura.” Large white sofas accompanied light surroundings, with all furniture custom made in Whiteley’s studio. While there are a number of contemporary rugs, there are no fitted carpets. The mahogany floor planks remain uncovered and “speak for themselves,” according to Whiteley. And when it comes to art, Aquarius is populated with a series of photographs taken by the owner, as well as original prints from Beken of Cowes.

Launched in January 2018, Aquarius spent the winter putting her cruising credentials to the test in the Caribbean before heading to the Mediterranean for the summer season. And we won't have to wait long to see her racing skills. Aquarius’ owners have already confirmed the yacht will be taking part in the St Barths Bucket next year.

All photography by Carlo Baroncini