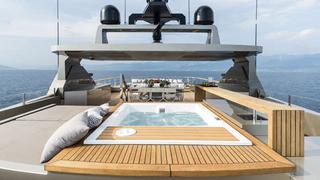 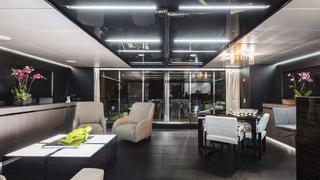 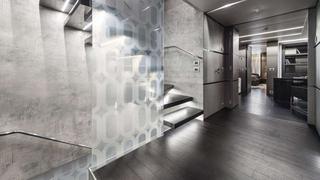 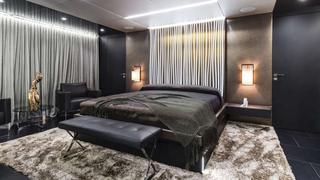 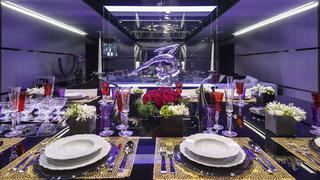 Cacos V marks a departure from the past in many ways. She is the first in Admiral’s Impero 40 series, and therefore the first example of the new course chosen by the Italian yard since it became part of The Italian Sea Group – a conglomerate comprising Admiral, Tecnomar, the recently acquired Nuovi Cantieri Apuania yard, and the new sailing arm of the marque, Silent.

As the first model that is an entirely new design, rather than a natural continuation of what the yard had hitherto been doing, Cacos V also represents the future of Admiral Tecnomar, which so far comprises an exciting and innovative range of models from 35 to 100 metres. ‘We are undergoing a very important phase in our development driven by the passion of all those involved from myself down to the production workers in the yard,’ explains chairman Giovanni Costantino. ‘We all know our current and future success is based on the fundamental principles of innovation and quality. We are focusing on these two factors, which demand a significant investment. The Admiral Impero 40 offers numerous innovative elements, and the care with which it has been engineered by our in-house department and constructed assures the highest quality.’

The Admiral Impero 40 undoubtedly offers originality in terms of form and function, which is evident the moment you step aboard. In the Cacos V specs list, one statistic that stands out above the rest is her prodigious volume. She comes in at 475GT, and at just 40 metres in length, this is an impressive figure. That this volume is also well disguised by her exterior styling is testament to the skills of her designer, Luca Dini.

‘The main deck superstructure forward is full beam,’ Dini says, ‘thereby offering the owner a suite worthy of a much larger yacht. The upper deck is also full beam in the central part of the yacht so the upper saloon extends over an extremely large area, offering dramatic views of the sea. Great care was taken with the exterior spaces, as the owner did not want to give up a stern beach area, leading us to the concept of a lateral garage which – thanks to the engineers – ensures that the launch and docking of the tender is always easy and safe.’

The main aft deck is generous and is almost totally protected by the upper deck. The large upper aft deck offers dining for 14, with a relaxed seating area right aft. At the bow of the upper deck, in front of the bridge, is another alfresco relaxation area that offers considerable privacy. The sundeck of Cacos V is completely open, and shaded only in the centre, site of another alfresco dining area. To the bow is a square spa pool with sunloungers, a bar and chairs, while aft is another lounging area with divans.

‘We started from the premise that we were first building a ship that could circumnavigate the globe for long periods,’ says Dini, ‘and secondly a yacht that offers comfortable living inside and outside in any climate. The formal rigour of the bridge area stems from this requirement: a navy-style bridge inclines towards the bow with large wings for visibility during manoeuvres, also a distinctive stylistic element.’

The passages from one area to another are managed in an extremely rational and efficient way to respect privacy, with social areas quite separate from private areas, both in the interior and exterior. Cacos V is also striking from a formal point of view, as the naval-style elements, as described by Dini, are immediately visible but blended with choices more typical in the yachting world such as a large sundeck, the large lateral windows in the hull and superstructure, and the beach area aft.

All this styling and volume, though, does not mean a compromise in performance for Cacos V. ‘This is a semi-displacement yacht,’ says Costantino. ‘The propulsion is the classic two fixed-pitch propellers; we have thrusters at the bow and stern and two zero-speed stabilisers.

Four guest cabins are on the lower deck, all with en suites and featuring large windows. The crew area forward has unusually generous space for a 40 metre yacht, while the captain has a twin cabin next to the bridge, a configuration normally found on larger yachts. The lighting is supplied by LEDs throughout, with some areas featuring RGB technology that lets you moderate the intensity and the colour temperature of each light. Cacos V brings together the best accessories and engineering on the market, all highly researched products. The owner left many decisions to the yard regarding the outfitting of the interior, the choices of colour and other elements, trusting their taste and appreciating what they were doing.

‘We carried out top-class work and our relationship with the owner was extremely cordial and positive,’ Costantino enthuses. ‘The owner’s requests were very few and at a technical level, as the project was already highly complex, and we took great care with the structure and outfitting to minimise vibrations and noise. We conceived her as a pleasure yacht as this was requested and I believe she will be for private use only.’

Other notable features on Cacos V include the windows in the main saloon, which are full height and offer a close and pleasant interaction with the sea. Many television screens and monitors are aboard, indicating that the owner has the intention of spending long periods at sea, working aboard, and needs to stay well informed. You can even find monitors in such unusual areas as the bathrooms and showers.

As Admiral Tecnomar forges ahead with its new ranges – and with several sold yachts currently in build – Cacos V is an emblem of a fresh beginning. Moreover, the yard is offering these models at prices that will be sure to catch the attention of savvy clients who like solid build quality in an innovative package. ‘We offer all this at a price that is fair as well as below that normally offered by the market,’ asserts Costantino. ‘We can sell at this price because we have rationalised all the phases of production and managed the costs without sparing a single euro on the materials or finishes. We are very proud of this new creation, which is the first in a series that for us is very important and adds to what we are offering as the new way forward for the brand.

‘Admiral Impero 40 is a yacht that breaks with the past, a yacht that carries highly advanced technology and living concepts not yet seen aboard a 40 metre yacht,’ Costantino concludes. ‘It is enough to analyse the gross tonnage to understand that we are speaking of large volumes, but ones which don’t come with heavy or awkward aesthetics thanks to Luca Dini’s styling.’ The future, one could say, is large indeed.