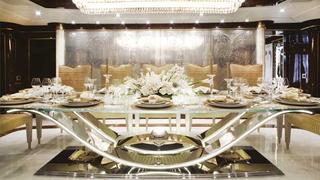 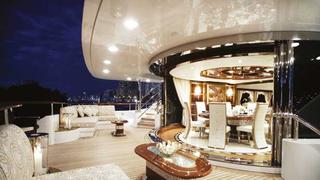 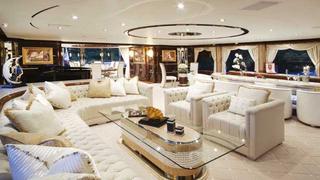 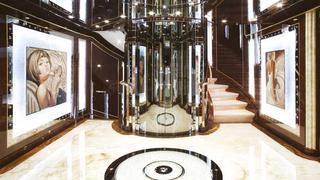 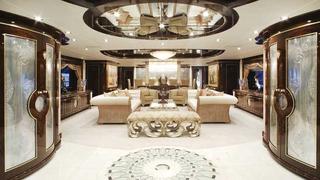 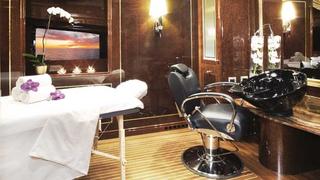 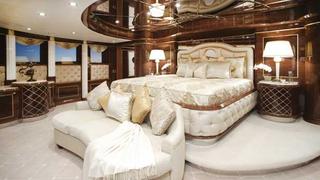 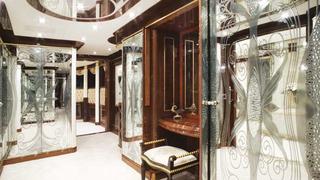 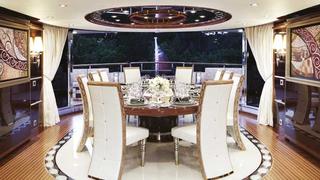 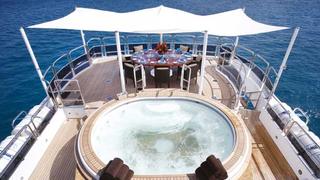 Literally and metaphorically, John Staluppi has spent much of his life with his head in an engine. As a 16-year-old mechanic he fell in love with the muscular engines of classic 1950s cars, whose voluptuous forms convey speed, even when standing still. Later his mechanical passion was the basis on which he built an empire of auto dealerships, and of his sideline in superyachts, which he commissions, uses, charters and sells.

It is no surprise, then, that Staluppi’s yachting history has been characterised by speed. Among the 17 he has built is the current world record holder for the fastest superyacht – The World Is Not Enough— the surprise comes with his latest project.Diamonds Are Forever may have a sleek, volume-concealing exterior, with über-cool shard shaped windows, but she is a 61 metre displacement yacht, filled with luxe décor of the heavy kind.

Staluppi and his wife Jeanette were, he says, ‘tired of worrying about how much the dishes weighed’, so rather than chasing speed, they set out to create the ultimate charter vessel. ‘I wanted more of a luxury yacht, for cruising – big displacement,’ says Staluppi. ‘On this boat we’ve got a gym, a beauty parlour, a massage area, a sauna – you can’t do that if you want to do 60 knots.’

But for a man as practical as Staluppi, the quest for luxury began with solid basics: a reliable hull. He admired the architecture of Quantum of Solace, a Benetti he bought as Midlandia and refitted. So for Diamonds Are Forever, launched in 2011, he turned to the Italian builder’s Livorno yard. He initially intended to start from scratch, but the opportunity arose to buy an existing hull and save a year and a half.

Staluppi’s influence is easiest to see in the heart of Diamonds Are Forever, behind the swim platform and garage: the engine room. He was happy with the part-built hull’s twin Caterpillar 3512HD engines, with a cruising speed of 15 knots and a top of 16 knots. But he made arresting aesthetic improvements.

The generators were upgraded, so the emergency unit can now power the whole yacht as normal, except for the zero-speed stabilisers. Forward, there’s a large walk-in fridge and freezer, a good-sized laundry room and two generous crew cabins. The hull was laid before the rule forbidding staff quarters below waterline, meaning these take up more of the hull than you would expect in a 2011 launch. Upstairs is the crew mess and five more crew cabins.

Aft, through soundproof doors, the guest areas of Diamonds Are Forever are fleshed out with Evan K Marshall’s sumptuous décor, installed with the help of Benetti interior coordinator, Domenico Gavagnin. It features glossy woods, art deco accents and lots of mirrors, while the diamanté studs glinting from furniture and fabrics hint at the yacht’s Bond-themed name. But these spaces are also inherently practical.

The lower deck guest cabins are a good example of this. The twin and three doubles feature Madrona burr woods, gold and silver leaf, embossed leather bed-heads and marble en suites. When work began on Diamonds Are Forever, the doubles were designed to fit queen-sized beds, but for the US market in particular, king-sized beds were necessary. They pushed out into the unused space, making more usable room without increasing the gross tonnage, which is measured to the hull side. This practicality was also central to Marshall’s décor. It may be rich and complex, but it doesn’t get in the way.

The central main-deck foyer is spectacular but its elements are firmly built in. The onyx floor is centred with a hand-beaten glass inlay by Dutch company Marieux. Mounted in chrome frames are paintings of sultry women, their jewellery highlighted with diamanté studs, while fixed side-tables support Jeanette Staluppi’s Erte sculptures.

The foyer of Diamonds Are Forever opens into a main saloon, with similar tones. Towards the end of the room is a spectacular mosaic, flanked by cabinets fronted with chrome-backed glass, etched and studded with diamantés by Marieux. A central seating area features cream armchairs by Marieux, with apple-sized crystals at the ends of the arms. Faux marble pillars separate this space from a dining area with a table designed by Marshall and built by Marieux. It has a glass top and stylised chrome base, accented by a strip of LEDs. Another panel of chromed glass serves as a backdrop; above it hangs a long deco chandelier by Sans Souci of Czech Republic. It’s formal luxury executed with a sense of fun.

Guests are served from the galley forward, on the other side of the foyer. This space was designed with input from chef Dieter Curth, who has worked on both Quantum of Solace and a German Navy submarine, where the galley was ‘the size of a phone booth’. For those who want to work off Curth’s meals, there’s a gym across the corridor from the galley, plus a sauna and beauty salon with a massage bed. Further forward is the full-beam, split-level VIP suite, which is as grand as the master directly above it.

The VIP cabin of Diamonds Are Forever has 180 degree views, a cream chaise longue, cream tufted bed base and panelling, and burr wood cabinets, while the gold design on the bedspread is highlighted with diamantés. Aft on the suite’s lower level are his-and-hers dressing rooms and a large marble bathroom. There’s also a small night head off the cabin, so guests don’t stumble downstairs in the dark.

The upper deck master suite is slightly larger and the bed faces forward, raised on a platform to enhance the 180 degree views. It has a similar colour scheme to the VIP, a large cream sofa, and Art Line myrtle burr cabinets with crisscrossed mother-of-pearl inlays.

The en suite has twin showers, a grand central bath in honey coloured marble and Lalique lamps. Aft is a corridor of mirrored wardrobes etched by Marieux and an out-of-the-way study. The suite is a well-considered and decadent space.

Diamonds Are Forever's full-beam sky lounge aft feels relaxed and bright – aided by Staluppi’s space planning. ‘On a previous boat he moved air trunks outside because they blocked windows,’ says Marshall. ‘On this boat he did the same. It makes a spectacular difference in terms of space and light.’

White furniture enhances this airiness and Staluppi insisted on correspondingly pure marble for the top of the wet bar (by Italian expert Guido Menchini & Son). A strip of diamantés runs around the burr base of the coffee table, and of a card table, whose high-backed, white leather chairs pick up the theme with diamanté-studded spines. Aft, a circular dining table can be closed off completely from the sky lounge by curved glass doors, while corresponding doors opposite open it up to the aft deck for alfresco dining.

On the sundeck above, a large spa pool overlooks a raised dining area and marble topped wet bar with a television. But Staluppi was just as interested in the design of the pilothouse forward on this deck, which he changed four times to improve its utility. Even further up is the most dramatic alteration Staluppi made to Diamonds Are Forever: the addition of a sky deck. The space is simple, with loungers, a large sofa and the protruding top of the lift, covered in high-gloss wood. It has a feeling of peace and privacy.

At the opposite end of Diamonds Are Forever, 0.3 metres was shaved off the keel to ensure the yacht would have a shallow enough draught to cruise the Bahamas. To compensate they upgraded the stabilisers and on the advice of Mike Perkins at Quantum, installed two long fins higher up the hull. The whole package worked well in the Bahamas and on its virgin voyage across the Atlantic to get there. A Schottel stern thruster was also installed, to help with manoeuvring. It runs off its own 400hp Yanmar diesel, which means the boat can be moved without turning on the main engines.

This effect is something we might expect from a man who loves engines. People who find joy in cogs and nuts working together in harmony tend to appreciate other efficient systems: spaces that work, logical layouts, kitchens that make your food better and your chef happier. It is this attention to functionality, rather than her gloss and sparkle, that truly makes this yacht a jewel.

Iceberg: the functional power boat designed by the Dashews

Illusion V: a relaxed and stylish family home at sea