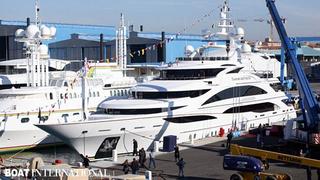 Livorno, Italy, 26 November – serial superyacht owner John Staluppi is no stranger to superyacht launches, having built some 17 superyachts to date which include the current world record holder for the fastest superyacht – The World Is Not Enough. His latest yacht, the 61m Diamonds Are Forever, is a displacement yacht built by Benetti in Livorno, but while her top speed may signify a change of pace on the water, there was no let-up during her build.

Staluppi bought the yacht while she was part complete, and in just 18 months undertook a complete transformation of the original design which included shaving 0.3m off the keel to reduce her draught, adding an extra deck up top, reconfiguring the interior layout from the main deck up, adding a Schottel jet pump stern thruster, and moving the upper deck air ducting to create a giant upper saloon.

The launch ceremony, attended by John Staluppi and his wife Jeanette, yard management and workers, broker Peter Thompson from Ocean Independence, designer Evan K Marshall and, exclusively, Boat International, proved a spectacular occasion, with a live performance of the theme song to the film Diamonds Are Forever followed by an action sequence where Bond grappled with a balaclava’d bad guy while suspended halfway down the superstructure of the yacht.

The yacht is due to leave the yard in December and will launch straight into her first charter before the year is out.

‘We built the boat to offer charter guests something different to what they’re used to,’ John Staluppi told BI. ‘She has plenty of room, plenty of storage, plenty of space. It has been a real pleasure working with the team at Benetti.’

Look out for the full feature on the yacht in a future issue of Boat International, along with video features from the launch and interviews with the key players on the iPad version of the magazine.