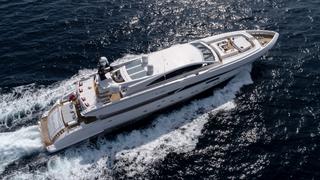 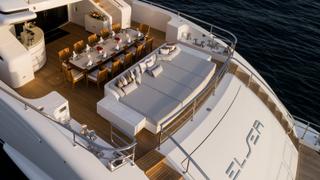 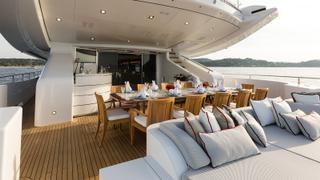 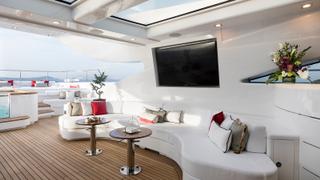 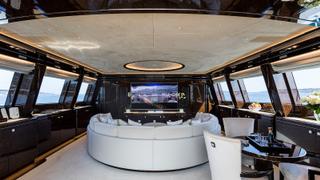 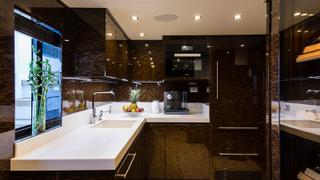 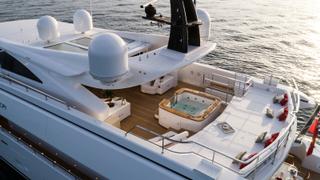 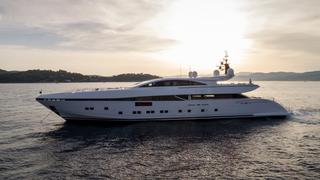 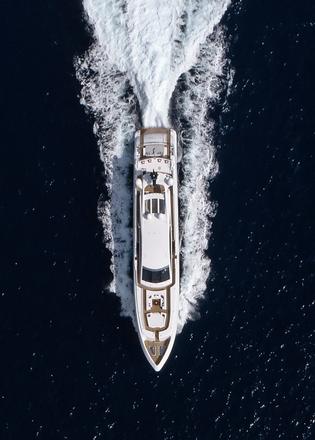 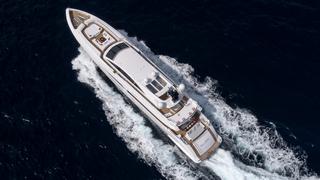 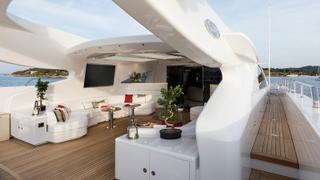 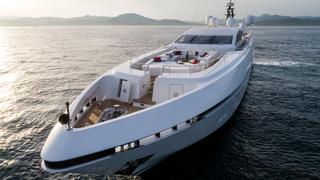 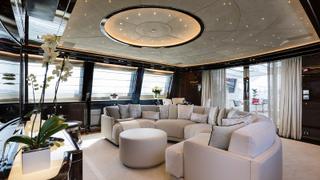 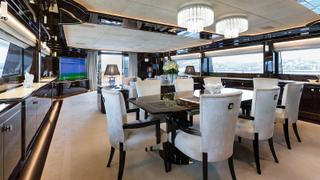 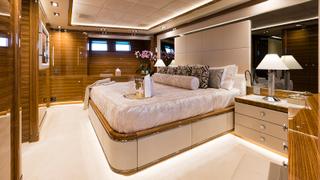 If she were a car, Elsea would be the love child of a Porsche 911 Carrera and a Bentley Mulsanne — streamlined in appearance and regal in her dimensions and depth of luxury. From water misters on the upper deck and a refrigerator for cooling sunscreen, to heated marble floors and soft silk and wool carpets, Elsea is 50 metres of unabashed hedonism. And the team behind her would not have it any other way.

Cerri Cantieri Navali was founded in 1997 by entrepreneur Carlo Cerri of Milan, and the boutique yard has built its reputation on semi-custom yachts that combine sleek looks, large exterior spaces and speed. In 2011, CCN became part of the Gavio Group, which now encompasses Baglietto and Bertram.

The all-aluminum Elsea is the first of the Fuoriserie line, which translates as “off series”, or bespoke. It is a new venture for the yard, which is located within sight of the marble hills above Carrara, but one that is likely to continue.

“Our capability at the moment is to deliver three, four boats a year in the range between 30 and 50 meters in length,” CCN’s CEO, Diego Deprati, says. “Now our focus is to follow strictly the wishes of clients who are more and more trying to match their own personality with their lifestyle at sea; a very small production and very high quality products.”

Elsea builds upon the yard’s history but takes it further. Naval architecture and styling is by Studio Bacigalupo with input from Giorgio Vafiadis, the firm that created the interior design. The yacht’s fluid lines are a bit of visual trickery: Elsea is a big yacht, just shy of 500 gross tonnes, but making it look like a lean, mean machine was not the only task.

“The owner wanted speed, open space and luxurious materials,” says Alessandro Balzi, the yard’s project manager. “The weight is a very big element. He wanted a lot of onyx and marble inside, decorative elements, so we had to counterbalance with a lot of weight saving measures.” Herein lay the main challenge for the yard, to achieve the contractual speed of 28 knots. CNN hit the target: Elsea exceeded 30 knots lightship in sea trials.

Cruising comfortably at 23 knots with engines at 80 per cent, Elsea handles like a giant Jet Ski, thanks to triple jets, triple 2000 series MTUs and an optional joystick. “It is fast and it’s great fun,” the captain says. “This is my first jet craft. Now I can see the merit; it is very responsive and very manoeuvrable,” he says. “It is also an extremely comfortable ride. We have not been in very big seas yet, but when we left the Monaco Yacht Show, we must have had two to three foot chop, and it all just disappears in front of us.”

Lacking no gizmo, Elsea has an auto-positioning feature, which works in conjunction with the bow thruster and two gyrostabilisers. “It is not an actual dynamic positioning system, but it is very similar to it,” the captain says. Several modes (sea, harbour, auto and manual) allow the captain to manoeuvre the boat with the joystick or hold a specific heading, and proves handy for holding position at a bridge or harbour entrance.

Where most open-style yachts have a flybridge, Elsea has in effect an extra deck, with commanding headroom. In addition to the bridge and a movie theatre, it combines open air and private enclosed spaces. “The wonderful thing about that aft deck is that it’s extremely private, even when you are in port, because the bulwarks are quite high and the sunpad at the back is raised. Even the boats next door can’t see into the enclosed space. So you can relax there without the prying eyes of the world,” the captain says.

From cushy sunpads aft, guests can cool off in a 3,600 litre superyacht spa pool that is fed by a waterfall. Forward is an open-air saloon under a skylight in photochromatic glass. “Now it is fading the light for better comfort but it can be transparent,” Balzi says as we tour Elsea on a sunny day. “There is a curtain of water misters to cool the area and it can also be refreshed with a fan coil.”

Here there are also two bars and two of the 26 television screens on board. A DJ station and karaoke machine are part of the entertainment system designed by Videoworks. Special jacks in all external areas allow the party to move. “The exact amount of wattage, I am not sure, but it is an incredible amount,” the captain says. “The music and the audiovisual set-up, it is absolutely top of the line.”

When alone at anchor in a pristine bay, or among friends, the 44.5 square metre lounge on the bow is another inviting spot. “Sun awnings give it a nice atmosphere. They are removable manually. The poles are in carbon painted white from Multiplex,” Balzi says.

The sails protect a banquette, large sunpads and tables from direct sunlight. They are rated up to 40 knots of wind, so they are useful even when the yacht is in motion. The awning over the teak and onyx dining table on the main deck aft has been left up when Elsea is cruising. “I have served meals with the glasses on here and they’ve been fine,” the head stewardess says.

Access to and from shore as well as around the yacht has been well planned. “The client wanted guests and himself to have a complete walkaround of the upper deck,” Balzi says.

Inside on this level, opulence was the watchword. “From the first meetings the owner asked for a very luxurious ambiance,” says Stefano Inglese Vafiadis, who worked with his father Giorgio on the project. “That’s why we designed a décor very rich in details and very pleasant thanks to the combination of many materials that, besides showing the ability of our fine craftsmen, creates a unique style and identity unifying the richness of the interiors. The entire construction was managed and supervised by Imperial Yachts. They have an extremely efficient construction management system and excellent supervisors.”

The upper saloon/movie theatre is organized around a semi-circular couch that faces an 88-inch curved screen. The soft ceiling material follows a circular pattern and is pierced with tiny light inserts. “The idea behind the upper deck lounge ceiling was to recreate the beauty of a spectacular en-plein-air summer sky full of stars, something that recalls the primitive charm of being under the light of thousands of stars,” Vafiadis says.

Constants throughout the interior are shimmering fabrics from the likes of Sahco, Dedar and Hermès in light hues, leather from Foglizzo, Lalique crystal accents, Cantalupi and Lalique lighting and furniture by Visionnaire, Fendi, Lalique and Arreda Italia, but each area has a slightly different feel.

“On a yacht we have four main areas: saloon and public areas, owner, guest and crew. So we decided to use different woods and colours in each,” Vafiadis says. “In the saloon and common spaces we used the dark palm wood and white onyx to create a dramatic contrast between the coldness of the dark wood and the warmness of the marble. We used this effect also with the lights, using the contrast between the Lalique crystal chandeliers, with cold light and then the warmness of the spotlights.”

An important guiding principle in Elsea’s design is privacy. Hence the full-beam owner's suite is off limits to photography. It’s a superb light-filled space with details including a heated mirror to avoid condensation, heated shower seats and a vanity with motion-sensitive light. A Swarovski panel shimmers as if lit by sunlight.

“We used a very warm plane wood with white onyx and mother of pearl in the bathrooms, creating a very elegant, fine and cozy environment,” Vafiadis says.

A rare blue onyx in two of the guest bathrooms on the lower deck provides the illusion of showering in the clouds. Delicate mother of pearl decorates cabinets in all en suites, aglow with subtle lights, and basins in backlit onyx.

The crew accommodation on Elsea is situated aft, separating the five lower guest cabins from the vast engine room and the tender garage. Access to the crew area from the main deck is via a large pantry, which rivals in size some yacht galleys. “For a sports boat it’s amazing,” says the head stewardess, who has worked on large displacement yachts. The crew space accommodates nine in six cabins, a good crew mess, a galley and a laundry with professional Miele machines.

Compensating for the very full interior pushed the yard to find weight solutions that don’t distract from the luxurious finishes. The stone, wherever possible, is thinly cut and backed by lightweight and insulating materials, but the technique could not be used for backlit elements, Balzi says. “Outdoor furnishings and cabinetry were built in advanced composite materials, including carbon fibre,” he adds.

But even traditional materials hide innovation. High gloss wood panels conceal the technology within. A sophisticated light system by Videoworks based on a Lutron system is controlled by iPads, as are curtains, temperature and sound. A substantial IT backbone supports audio video on-demand, a Crestron management system, extensive communication capabilities and a security system. “Whatever [the client asked for], we tried to make him happy and we worked very hard to make it happen,” Deprati says.

Now that this challenge is behind them, CCN is looking to do more special projects. “We have found the right balance between style, performance and luxury.” The yard has more custom projects under way: a 40 metre explorer built to light ice class in co-operation with brokers Floating Life for an American owner, a 26.8 metre triple jet yacht for Italian fashion innovator Roberto Cavalli and a 31 metre hybrid project designed by Guido de Groot for a European yachtsman. The goal is for each of these projects to expand CCN’s reputation as a custom yard ready to tackle any challenge.

First published in the December 2017 US Edition of Boat International.