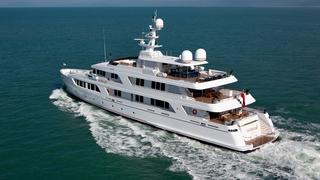 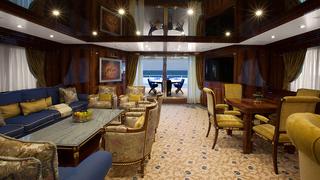 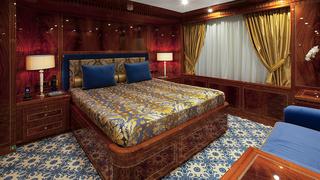 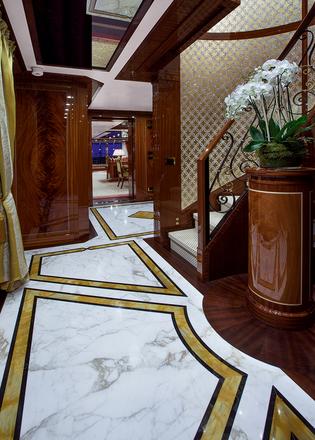 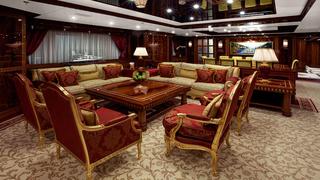 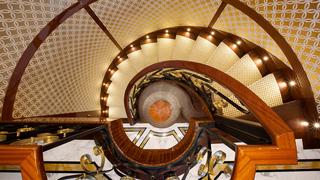 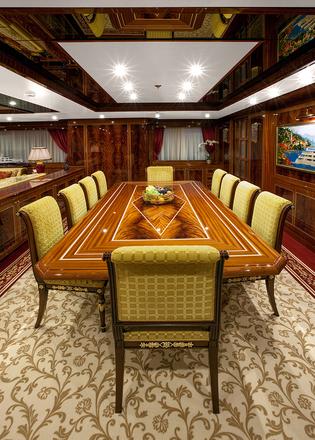 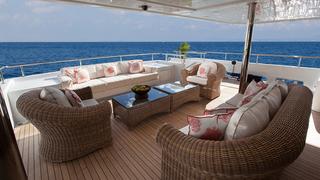 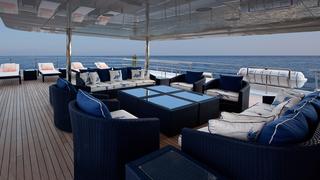 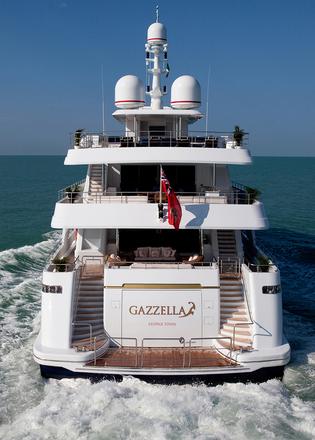 The boats of Codecasa’s Vintage Series are starting to feel like the components of an extravagant magic trick. Ladies and gentlemen, watch these three carefully: the first, launched in 2011, is 42 metre Magari; the second, 42 metre Libra, which hit the water in 2013; while the third – and largest so far – 50 metre Gazzella, was unveiled last year.

There is variation in size but the DNA is identical – classic lines that hark back to the mid 20th century, with a layout that offers 21st century-sized spaces. Old-fashioned grace, modern proportions – and, from the dock, that family lineage is clear. But the interior styles of the three boats are so far apart that, while exploring one, it is hard to believe that she could be related to either of the others.

If Magari is a summerhouse, with modern whites and bleached woods, and Libra’s cream panels and tan leather are more akin to a Hamptons villa, then Gazzella’s warm gloss and gilt make her the Italian palace. The trick is not the difference – it’s that each distinctive interior seems a sinuous whole with an exterior styling they all share. Paola Spano, an interior designer at Codecasa, puts it down to keeping the lines, which are designed in-house, “clean and simple”. This leaves the interior open to different interpretations, so that “the Vintage Series is able to accommodate any kind of interior style, both classic or modern”.

Wherever their designs end up, Vintage Series yachts are started on spec and Gazzella’s owner came on to the scene when the yacht’s hull was completed. “The owner didn’t really want to take this step – to own a boat,” says Nadia Bendedouch, a charter broker at Ocean Independence and owner’s representative on Gazzella. “But he has been a charterer for many years and he was always looking at these charter boats – if I had a boat I would do this, or wouldn’t do that. Then there was this good opportunity – a yacht being built that he could have for his own holidays. He decided suddenly to go ahead.”

The owner is a private man and Codecasa’s reputation fits with this: nearly 200 years old, the family-run yard is conservative, tucked away on a quiet corner of dock in Viareggio’s superyacht-building hub with its corral of skilled in-house technical staff. The company doesn’t display at boat shows, preferring to invest in its products. This spirit runs through the design of the boat, which from layout to décor, is classical and private.

“Among the fixed elements were the position of the structural bulkheads, of the elevator and of the stairs,” says Sara Mencacci, an interior designer at Codecasa, who worked with Spano on the design. “Around them, the whole interior of the yacht was developed.” The owner told the designers that he wanted to feel “at home” and they presented him with three proposals offering different architectural details. He chose a conventional style and a decorative scheme that is rich, heavy, determinedly traditional and perhaps even homely (if your home has ballrooms).

In the long main saloon the aft seating area is separated from the formal dining area only by a row of low cabinets, retaining a sense of flow that is important when the dark mahogany and ornate decoration could give a closed-in feel. Large sections of white on the overheads and cream carpets do the same job. If Gazzella’s saloon is a grand introduction to guests entering from the aft deck, then the central lobby continues the tone: floors in golden calacatta marble with yellow siena and black marquina inlays and, most arrestingly, a mother of pearl and gold leaf design on the curving staircase walls.

The size of Gazzella meant the yard was able to install a lift – located just aft of the staircase – to serve all four decks, right up to the sundeck. Those extra eight metres were also put to good use forward on the main deck, where the team managed to fit in a VIP cabin as well as a good-sized office in the owner’s suite. This space features a spectacular bathroom forward that stretches the breadth of the suite, with separate sink and toilet areas joined by a massive, honey-hued shower with an onyx floor and floral mosaic walls. Each cabin is clad in jewel-toned fabrics and the choice for the owner’s cabin is ruby – from the velvet bedhead and crystal bedside lamps to the carpets, cushions and bedding.

The same tone is repeated in the VIP and the four guest cabins feature deep port, gold, ochre, royal blue and sapphire, with lots of velvet and satin. The upper saloon of Gazzella is lighter, with sky blues and pale golds, as well as a neat corner bar. The yard has certainly achieved the warm and private atmosphere that the owner ordered and, as the owner’s rep puts it: “He is very pleased. It is his baby and he loves it.”

Indeed, the owner’s passion showed in his attention to detail, down to the direction of the televisions (angled for the best possible visibility) and the highest tech behind them. “The owner asked for the best satellite equipment to never lose the satellite reception,” says Spano. “Thanks to the large size of t_ Gazzella_, we were able to install two Sea Tel antennas, each one with a 150cm dome, and also one Sea Tel 900 VSAT antenna with a 100cm dome, with internet connection through the satellite, thanks to a Cisco wireless system. On our previous Vintage yachts we installed one antenna with a 100cm dome.”

The owner was also specific about the provenance of the décor, which is thoroughly “made in Italy”, for craftsmanship and a sense of affinity with the Italian-built yacht. The list runs from Baldi lamps made in Florence, to the gold and mother of pearl on the staircase by Venetian company Zanin and upper deck furniture by Lombardy-based Zanaboni.

Detail has been applied to exterior areas, too. The sundeck is massive – even for a 50 metre – and has a seating area that feels private thanks to its central position and the shade of the hardtop. The spa pool on Gazzella feels even more secluded, due to its spot tucked away up front, sequestered from the rest of the deck by a dayhead, shower and the lift, and shielded from the foredeck by shaded screens.

Down in the wheelhouse the integrated bridge features electronic charts but no touchscreens – “I don’t trust them,” says Captain Joshua Conquest. “If it freezes, you’ve got nothing.” There’s a radio officer’s desk with the requisite satellite, VHF and GPS and the wing stations are neat, with good visibility because of their overhang. The sensibly adjacent captain’s cabin is fitted out to guest standards and, down on the lower deck, the crew cabins are notable for their storage – every visible surface is a cupboard of some dimension. The galley is bright, homely, amply decked out with kit and next to the main saloon for easy service.

There are signs everywhere of the thought that has gone into the design: from the garage big enough for a 6.4 metre Castoldi tender and several toys, to the spare built-in fridge in the same space. “If we’re out at sea for a long time it is used as a garbage store, so it doesn’t start smelling,” says Conquest. The engine control room is triple-glazed to protect ears while stores and working spaces have been fitted into every nook, including a tank deck laundry room to supplement a larger lower deck one. “This smaller one is about the size of the only laundry on my old boat of 18 crew and 12 guests,” says Conquest. Good laundry may not sound glamorous but it’s one of the many small things that together make life on board Gazzella feel like magic to her owner.