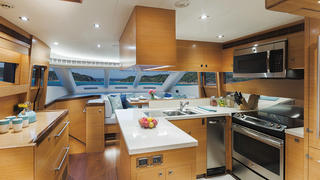 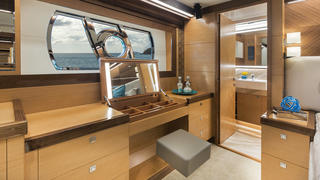 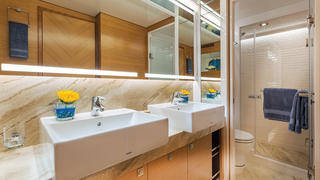 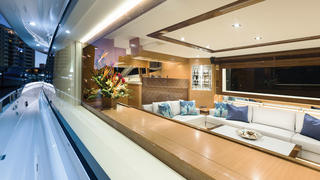 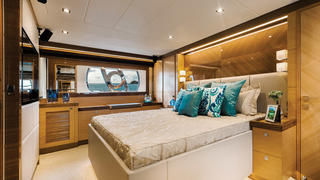 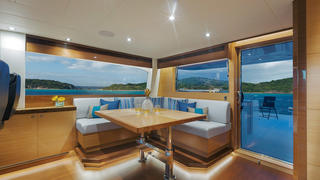 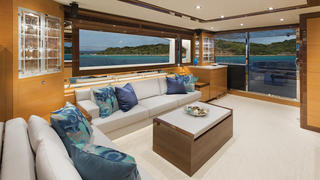 A couple’s impromptu waltz on the upper aft deck of Horizon’s E75 motor yacht showed off a great use of space. Without a tender stowed up here, the area is wide open, and a set of admiring friends enjoyed the show from the air-conditioned, enclosed skylounge. After a few dips and twirls the moment ran out, and the dancers and their audience continued their tour of the E75 at the 2016 Fort Lauderdale International Boat Show.

Indeed, it would have been fitting if they danced their way through the flowing layout of the yacht, flitting through the abundant spaces as if in a maritime musical. Openness is a central theme of the Horizon E75, designed by the yard’s in-house design team headed by Austin Lin, with large windows and few structural impediments to block the views fore, aft and outward.

“Austin is all about flow and making guests feel a part of the yacht,” explains Roger Sowerbutts, director of Horizon Yachts USA. “We have a five-axis router at the yard in Kaohsiung, Taiwan; it’s 27 metres long by nine metres wide and can tool large sections in perfect symmetry with all the creative curves and lines that exemplify the Horizon personality, all while reducing waste and manufacturing times.”

The Horizon E75 (with a 23.62 metre LOA) follows the curvy lines of the larger Horizon E88. It is an evolution of Horizon’s popular E73 model and is to some eyes a little more modern in profile. While the E73 remains an integral part of Horizon’s lineup, the E75 offers a bit more space — more than a metre in the main salon and a bigger aft deck — and a few variations in layout that were not available on the smaller model.

“The E73 can accommodate three staterooms and three heads, but the third stateroom is a bunk,” Sowerbutts says. “The extra room in the Horizon E75 allows us to have side-by-side twin beds in this cabin. The retooling also allowed for the foredeck seating area on the bow (including a table, lounge and large sunpad), which we could not do on the E73.”

Those twin beds can be joined together to create a double. There is also an en-suite VIP cabin in the bow with a queen bed, and the amidships owner's cabin features a king-size bed on the centerline with the en-suite bathroom aft. Throughout the Horizon E75, the eminently liveable décor relies on light-toned horizontal grained anigre joinery, set off with darker walnut accents. There is a nautical feel with neutral fabrics complemented by blue hues.

In Hull No. 2, the Horizon E75’s enclosed skylounge version, a port-side staircase leads from the main salon to a good-space air-conditioned space, where twin Stidd helm chairs overlook a huge dash with controls for Caterpillar engines, Garmin electronics, ABT-TRAC stabilizers and Maxwell windlass.

The area also includes an L-shaped lounge around a coffee table and a flatscreen TV. A dayhead is located in the port aft corner, and sliding glass doors lead to that spacious aft deck, which has a barbecue and three-stool sit-down bar. There’s also access to the main aft deck below via an outside port staircase.

“This upper aft deck is plumbed for a davit and there’s plenty of tender storage space,” Sowerbutts says. “The boat deck bar and grill have protection from the overhang off the skylounge, when you want to be outdoors and out of the air-conditioning,” a feature he credits to dealer and client feedback.

Guests will likely spend plenty of outdoor time on the Horizon E75’s wide swim platform, which can be hydraulically dropped one metre into the water for easy sea entry. The platform has a 680kg capacity and is perfect for a tender. In the centre of the transom is access to the two-person crew quarters and engine room. Crew can also enter their quarters through a hatch in the aft deck sole when the weather is poor.

Horizon’s FRP construction techniques are constantly being refined, and all hulls including the E75 are 3D resin-infused using vacuum-assisted resin transfer moulding (VARTM). This means the stringers and hull can be done in one shot creating an incredibly strong hull form with excellent resin-to-mat ratios that are verified for integrity using non-destructive testing, such as lock-in thermography and ultrasound.

Horizon varies the hull coring and layup where needed to improve harmonics and reduce noise transference. As part of the extensive sea trials prior to delivery, full computer analysis testing throughout the Horizon E75 verifies that everything is operating optimally.

“Because the Horizon E75 is right on the edge of being owner operated or having a captain and crew, it’s hard to describe the typical buyer,” Sowerbutts says. “We have buyers moving up in size, moving down and those just getting into yachting in general. Because of our flexibility, we ask that buyers give us a wish list, and we will provide a selection of drawings that try and tick as many boxes as possible to suit their ideal lifestyle.”

Design study: 7 ways Horizon sisterships are one of a kind