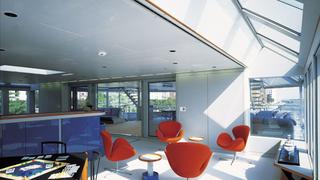 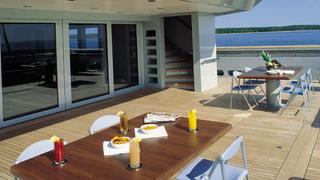 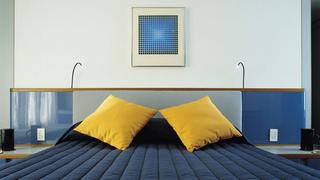 ‘To create something one has to start from a concept. What is the purpose? What is the style? I have a simple answer: the yacht is to be home away from my home in Seattle, and its style should match the style of the house, adapted for the practicalities of the sea. I expect to occupy the yacht mostly at anchor or in port, so this calls for a full displacement hull. Speed is to be secondary to space, quiet and convenience.’

These words by Charles Simonyi, Skat’s owner, were impressed on Espen Øino’s mind as he flew back to Europe in April 1999 after spending a day with Simonyi at his waterfront home. He realised that he faced his biggest challenge to date.

‘Honest’ is the key word that Øino attributes to the project, shaping a defining language of intersecting flat surfaces with no arbitrary shapes. He recalls: ‘The owner is a rational and logical man who believed that most boats looked as if they were carved out of soft cheese and thought, “Why spend time and tonnes of filler to make it look like something it is not? Steel and aluminium come in flat plates!”’ As the man who oversaw the development of Excel and Word at Microsoft, it was natural to expect Simonyi to like methodical order. ‘To create [Baudelaire’s] ordre et beauté all surfaces must be easily cleaned and all contents must have built-in spaces for them,’ he had said: shoes stowed on shelves, for example, not in wicker baskets on deck.

Guest cabins, and indeed all spaces, are free of superfluous lines or decoration. Uncluttered, simple surfaces, clean painting and, above all, lots of light put people first. Marco Zanini, the interior designer, specified few materials and colours but still achieved the appropriate richness in each space, with minimum tolerances in the extremely modern detailing. Splashes of colour – red and blue – are evident in some loose furniture, while original artworks by Lichtenstein and Vasarely stand out in the natural light.

Øino successfully interpreted the brief, producing a boat not dissimilar from Simonyi’s main home, just the bow and sweeping knuckle showing a curve (and, of course, the underwater form for hydrodynamics). The profile, finished in grey like the owner’s house, jet and helicopter, appears suitably ‘menacing’, but the number 9906 on the hull, while it looks military, is simply Øino’s project number (Year 1999, Enquiry No. 06). However, warship technology does exist below the skin, with double-resilient mounted machinery ensuring that Skat is ‘very, very quiet’.

Extensive glazing allows a lot of light in – as well as spectacular views out, while the overhanging ‘conservatory’ gives a unique look both inside and out. A smooth transition from exterior to interior really does happen on this yacht in a logical and contemporary manner.

Skat, meaning ‘treasure’ in Danish, is a refreshing breakthrough in superyacht constructivism, an extension of the owner’s house – and Bauhaus.