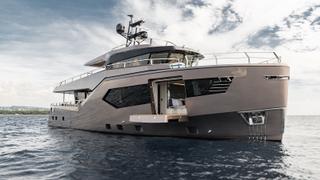 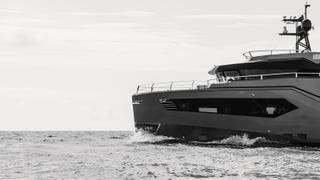 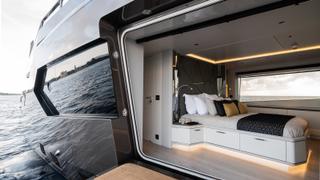 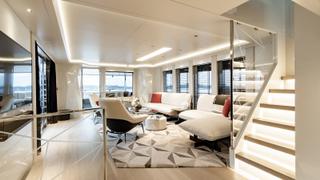 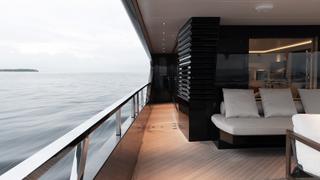 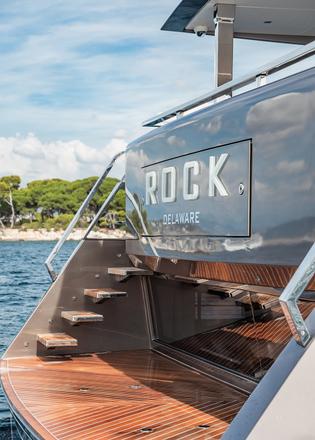 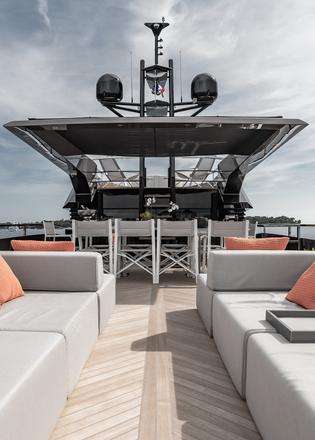 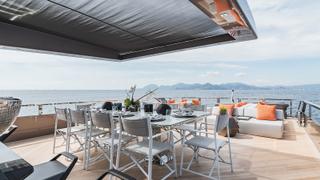 Rock: Inside the stone cold genius of Evadne's explorer yacht

A Turkish businessman saw a gap in the explorer yacht market and engaged an experienced design studio to help him fill it. Sam Fortescue meets the comfortable, practical and quirky triumph of imagination they created...

There’s something of a fairytale quality to the story of this genre-busting yacht. Rock has appeared from nowhere, courtesy of a little-known Turkish yard called Evadne Yachts, which has hitherto specialised in beamy, traditional Turkish sailing boats. The owner, Ali Sayakci, was gifted the yard by his wife and has been running it as a distraction from his main occupation: quarrying for stone in the hills of northwest Turkey. And yet, here is 24 metres of sublimely finished, sophisticated boy’s toy. It’s quite hard to take in over coffee in the mounting din of the morning dock in Cannes.

Sayakci is justifiably proud of his new plaything, which has created quite a stir since its debut. “I learned a new word today,” he tells me when I step aboard for the tour. “Eyecatcher. I’ve had some very good feedback from the public.”

The angular, masculine look and the branding as a “Sea Utility Vehicle” are bang on trend, while her length, at a shade under 24 metres at the waterline, neatly avoids a world of extra regulation. “I see there is a latent demand for this type of product,” Sayakci continues. “This size of boat with the characteristics of a proper ship. We were expecting success, but we were not expecting this much appreciation and understanding from the market.”

Rock has explorer boat looks, with her high bow, reverse-sloping windscreen on the bridge deck and cut away bulwarks aft. And she is designed to cross oceans: 2000hp from her twin CAT C12.9 engines can push the fast displacement hull along at 15 knots, but at 9 knots she has a range of 3,000 nautical miles. For me, though, her mission is more about creeping into far-flung corners of the Med with her 1.8 metre draught, or exploring off the beaten track in the Caribbean. That’s why the SUV moniker sits so well. She is something of a hybrid. A crossover. A new breed.

Before I can drink my coffee, we’re joined by designer Bart Bouwhuis, partner at Dutch design studio Vripack, which transformed Sayakci’s ideas into a ship. “We’d done some small trawler yachts with them before, so we knew the shipyard,” says Bouwhuis. “We gave Sayakci a fresh concept and, to his credit, he got it from day one.”

The Vripack interior is all about space and comfort – muted fabrics and maple wood contrasting with the mineral geometry. “Because of the owner’s natural stone business, our brief was ‘a rock of the sea’,” Bouwhuis explains. And when you know this, you start to spot endless little reflections of this idea in the interior styling: a door handle whose length is carved into facets; a grey-and-white rug with geometric patterns on it; a table with a top comprising a trapezoidal slab of onyx. “We laminated it between glass, so it’s very, very strong,” says Sayakci. The closer you look the more you see.

The scale of it is impressive for a yacht of this size – there are no pokey little corners here. The saloon runs the beam of the superstructure, but is open at the forward end, down three steps to the dining table with huge portlights. “The sightlines from the main saloon are great, out to the sea through low windows,” says Bouwhuis. On we rush, up another step into the owner’s cabin, full beam again and flooded with light.

But its defining feature is the extra room created by a fold-down balcony. “You don’t normally see that on 24 metre boats,” says Bouwhuis. “But Rock has the feel of a 32 metre.” The balcony has a window built into it and provides a terrace big enough for two to sit at a café table – surely the best spot on board for breakfast with the kids or a private sundowner.

I notice more of Rock’s geometric patterns, this time set into the leather of the headboard, as well as some actual rock – grey veined black marble enclosing the basin on the forward bulkhead. Sayakci follows my glance and smiles. “That’s honeycomb with a five-millimetre-thick wafer of real stone on it,” he says. “There are more than 60 square metres of stone on board and if it was solid, it would weigh 3.5 tonnes. This way, it’s only 1.2 tonnes.” I ask him whether it’s hard to cut marble into five-millimetre slices; the King of Stone just nods.

Again defying the normal rules for this size of yacht, Rock has three big guest cabins. There’s a full-beam en suite under the dining area, but it is the two aft VIP cabins that impress the most. Both have huge portlights and, exceptionally, full-width transom windows looking out on to the bathing platform. It’s a breathtaking feature that puts your eyes almost at water level – a real blast under way. Smart features like this turn Rock from a wannabe into a “follow me” design.

“On board, the family will always be facing the sea, that’s how we designed her,” explains Bouwhuis. “Although a rather open-plan layout, the furniture is placed more like a modern loft than traditional yacht. In plan view that creates an asymmetric layout which at first sight startles you. When you actually use the yacht at sea it all makes sense.”

From water level we’re whisked back up to the main deck and on up to the wheelhouse, where the instruments are set into – you guessed it – a geometrically shaped console. There’s lounging space here, too, reserved for the owner’s family. “The only problem is that sometimes the captain can’t drive the boat because the children are busy on the PlayStation,” admits Sayakci.

When the skipper needs some peace and quiet, the party moves to the huge open “lounge deck” aft, with a removable canvas soft-top. Its 55 square metres give ample room for bar seats and a grill, an eight-person table and two big pods of sofas. “This is modular furniture,” says Sayakci, whose wife’s interior design company Noce Home built them to Vripack’s spec. “The cushions here are sand-ballasted for better support.” I would never have thought it, but he’s right: the sand makes them more stable and comfortable. Sayakci demonstrates how they sometimes eat Roman-style, reclining lazily.

Astonishingly, I find there is still room for a spa pool on the wheelhouse roof, along with a couple of easy chairs. “She’s really a two-and-a-half decker,” says Bouwhuis, “but the configuration makes it feel like a three decker.” This sleight of hand, or designer’s pen, is achieved by using half levels separated by just a few steps.

I wonder out loud where you’d put the tender, before Bouwhuis points out the slim crane gleaming in the same gold colour as the hull and superstructure on the sundeck. You could either store the tender on the aft deck below, or for a longer passage clear the furniture and stow it up on the lounge deck. Either way, the only size limit is Rock’s beam – around six metres.

“I ideated the Rock concept,” Sayakci explains. “I wanted a next-generation explorer featuring volume, performance and sex appeal. I thought of the features and the style, then prepared a mood board for inspiration.” And in line with the “boy’s toy” positioning, much of that inspiration seems to have been the female form. There are photographic portraits, oil paintings, Warhol-style screen-prints, almost all of which feature women.

“I love art and we started to choose objects before the welding of the boat began,” says Sayakci. “I curated art with nudity and retro touches, including James Bond-themed pieces for the soul of the Rock brand. We wanted to underline femininity, lifestyle and memories.”

Rock was sold on the second day of the Cannes Yachting Festival and the clamour around the SUV has emboldened Sayakci to start scoping work for other sizes in Rock’s mould. The yard has started on build number two of the same size, but a 31 metre and a 40 metre are also under development. “We will scale the Rock range according to the demand and market trends, but above all will keep the DNA of the brand: spacious and creative layouts in an impressive exterior.”

So it looks as if the fairytale is far from over: “It is a full-scale innovation and lifestyle business for me,” says Sayakci. The King of Stone has learned to float, and he’s under way.

Tiers of joy: On board Amels' 58 metre trailblazer Volpini 2