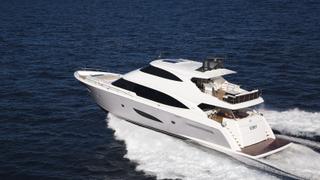 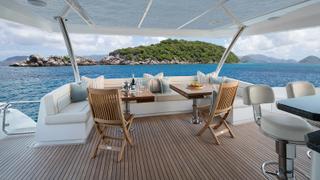 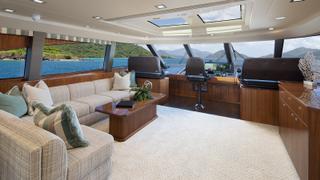 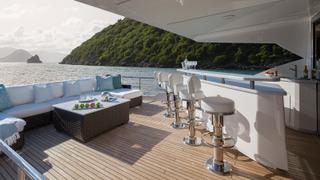 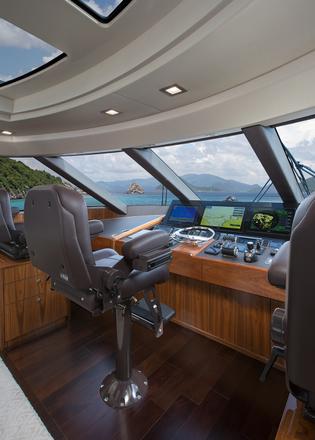 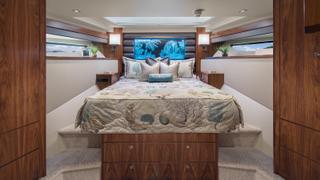 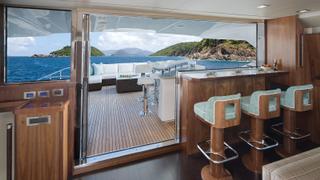 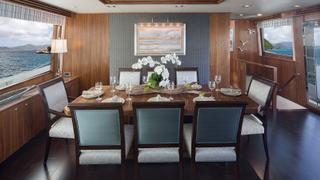 A 28.5 metre with the DNA of a high-performance sportfisher is a welcome addition to Viking’s born-again Motor Yacht line, says Kate Lardy...

Sportfishers are the powerhouses of the yachting world, built to withstand the strenuous demands of chasing blue water behemoths in the Gulf Stream. So imagine what happens if you take the performance and quality of these battleaxes and apply it to cruising motor yachts. Viking, the prolific builder of sportfishers on New Jersey’s Bass River in the US, is doing just that.

“No one builds more enclosed sportfish yachts than we do,” says Viking’s president Pat Healey, so it wasn’t a huge leap when he took the decision four years ago to re-enter the cruising yacht market, which is currently seeing strong growth in the US. “Especially with our customers,” he says. “As the baby boomers grow and age, they want to stay boating but they may not fish as hard as they did.”

About half the yachts launched in the yard’s reborn Motor Yacht line – since the company unveiled the first 24 metre 75MY in 2014 – have been sold to Viking clients seeking a more leisurely on-the-water experience. Viking is further investing in this market, recently launching the biggest yacht it has built in its 54-year history, the 28.5 metre 93 Motor Yacht.

Its raison d’être differs from a sportfisher but the styling is pure Viking – its swept-back superstructure recalling the lines of convertibles is a deliberate choice, says Chris Critchett of Michael Peters Yacht Design, which works with Viking for the styling, space planning and hull design of all of its motor yachts. And like all Vikings, which Healey personally tests, its design ethos seems to be bigger is better. “As an American yacht company we try to build things large,” says Christopher Landry, director of communications. “Americans like things big… saloons, decks, refrigerators, televisions.”

What better place is there to showcase this than on the company’s flagship? “With 93ft, you don’t feel that your living experience on board is compromised by the fact that you’re [trying] to fit everything on the boat,” says Critchett. For instance, starting on the main deck aft, bountiful U-shaped seating wraps around the transom in lieu of a more common bench. The accompanying twin tables (a good set-up for access) unfold to create one large banquet table.

The interior design throughout the boat is warm and comfortable, with walnut wood, thick carpeting, and soft, tactile fabrics

In the country kitchen-style galley forward, a supersized 2.1 metre Sub-Zero refrigerator takes pride of place. The galley itself is comfortably commodious, with a congenial raised dinette under the forward windows augmented by four stools flanking an island bar.

The master suite, with private entrance, is full beam, with a king-sized bed facing a 65-inch television. A walk-in wardrobe and spacious ensuite with dual basins share the full width behind the bed, buffering the bedroom from the crew quarters for three that lie on the other side of the bulkhead.

The only room in the boat that seems small is the starboard-side bunk cabin in the guest quarters, which are accessed via a separate staircase. But this diminutive cabin brings the total number of suites on board to an impressive five, and it is quite suitable for children. The three other guest cabins here are of pleasant dimensions and include big showers. As for communal guest spaces, both the main and bridge decks feature opening glass doors leading to the aft decks, which make for big indoor-outdoor spaces on both levels.

A bar on the bridge deck sits right at this transition point, with three stools facing outward. When the powered window recedes into the bar as the adjacent bi-folding door opens, those sitting at the bar will feel like they are outside while being completely sheltered from the elements.

The yard builds semi-custom boats, so there is room for variation. “It’s not an open canvas but the canvas is pretty good,” Healey says. “Obviously bulkheads cannot be moved.” And there are options in terms of engine power. The first 93 matches the yacht’s big dimensions with big power from MTU. “The performance of this boat is another separation point for us,” Landry says. The 93’s top speed exceeds 27 knots, thanks to the twin 1,945hp 12 cylinder MTUs. Cruise speed is between 21 and 24 knots.

The hull bottom contributes, of course. “We have spent $48.5 million on R&D, design, engineering and tooling of all of our new models in the last four years,” Healey says. “If we didn’t spend it, we wouldn’t have the product that we have today.” Designers and builders put the 93’s new hull through its paces in what Critchett describes as “a very rough water sea trial where a professional crew probably wouldn’t have taken out their guests. We specifically wanted a day like that, and it was a great day. It’s amazing what a 93ft, couple hundred thousand pound boat will do; it is extremely comfortable.”

The engine room is a particular point of pride for the builder. The machinery room gleams with Awlgrip finish, and there’s easy walkaround access for all maintenance. But it’s what you don’t see at first glance that really sets it apart. “It’s the quality of the equipment, components and installation. Everything is done properly for easy serviceability. It’s 100 per cent done right,” Healey says.

On top of the layout that caters to Americans’ penchant for size, there are a number of extra features on this model that add to the experience. One of the most prominent is the balcony. Hydraulic sliding glass doors open on the starboard side of the main saloon next to the dining area, and the bulwark unfolds, also hydraulically, bringing the outdoors in.

A sunroof over the helm a level above accomplishes the same thing. With both the roof and aft door open, the bridge deck saloon gets plenty of fresh air and is at one with the aft deck. This deck is dedicated to entertaining, as the tender is stowed below in a garage behind the transom door.

The foredeck hosts another al fresco lounge including a sofa that can be sheltered with removable carbon fibre poles. These are stored, along with the balcony’s rails, under the adjacent sunpad, which is one huge storage space. Forward of this is a skylight above the VIP suite’s queen-sized bed.

The interior, built in-house, is as meticulously done as you might expect, featuring walnut, engineered wood from Avalon, thick carpeting, electrically powered curtains, and a variety of stone finishes from Caesarstone. There’s no rattling, drawers close decisively and doors latch precisely into place.

As Healey says, hardy sportfisher DNA can be found everywhere, “from the bottom of the boat and the engine room, to the quality of cabinetry, the exterior styling and the enclosed bridge. Remember, we (also) built motor yachts for 30 years. We took a hiatus for about 13 years; now we’re back!”

The next step in the series is already well in the works. The 100 will be an extended 93 with a fishing cockpit – a nice hybrid of Viking’s sportfishing and Motor Yacht lines.