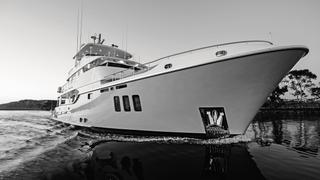 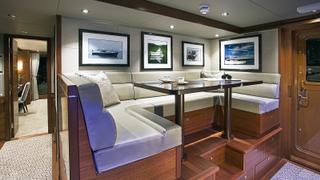 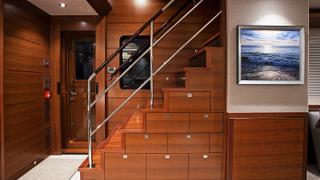 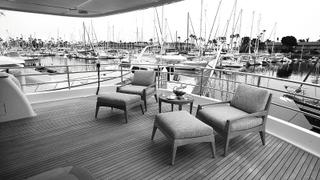 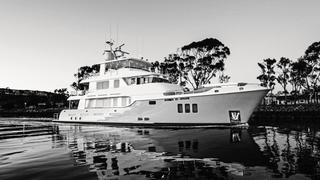 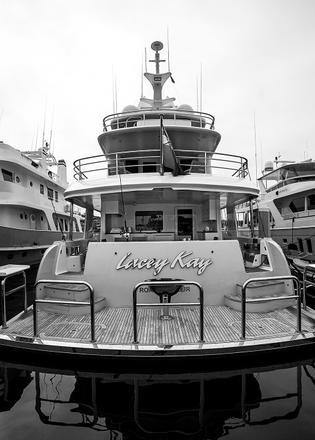 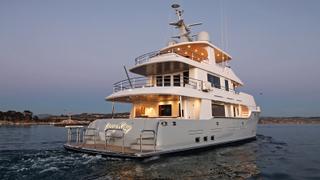 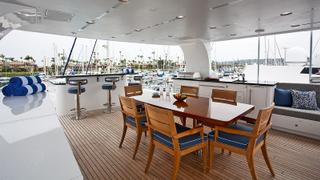 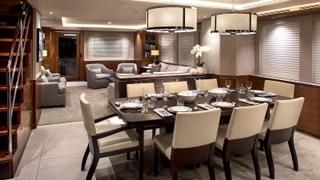 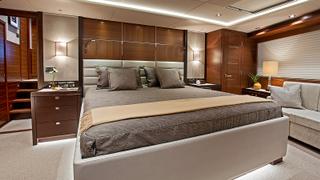 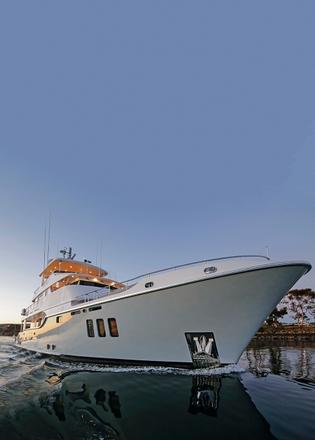 Grand adventures across the oceans don’t necessarily require an immense superyacht, but if you choose a more modestly sized boat you’ll need to pack a lot in. The new 29 metre Lacey Kay, with an 8,500 nautical mile range, is just such a yacht. She has more of everything to get the job done: more systems redundancy, more fuel and more style.

The yacht is the second Nordhavn 96 from Pacific Asian Enterprises (PAE), better known as California-based Nordhavn. She is a tri-deck displacement yacht built from GRP to AB classification at Nordhavn’s partner facility in Xiamen, China. The 96 is also a stretched hull — an extended version of the popular 86 design. It’s an approach that Nordhavn believes enhances value. “It’s a lot more cost effective to stretch a proven hull form than to design and build one from scratch, so new owners get more for their money,” says PAE’s vice-president, Jim Leishman.

These are also highly customised boats. Trever Smith, PAE’s project manager, guided this second hull of the Nordhavn 96 through its 27 month build process. “Redundancy was a huge theme,” he says. “For the owner it’s about self-sufficiency and this boat is the sum of all the ideas he forged on his previous Nordhavn."

Indeed, on Lacey Kay there are back-ups of back-ups for just about everything, including hydraulics, electrics and electronics — further beefing up the kit found on the first hull, MacGuffin, which was delivered in early 2016. Two gensets are fitted as standard but a smaller third 27.5kW Onan was added to Lacey Kay for quieter night-time operation.

Also added were three fuel transfer pumps, another hydraulic cooling pump, an Alfa Laval fuel polishing system, three laundry facilities with Miele washer/dryers, and additional power sources for the navigation system so that, even if Lacey Kay were suddenly to go 'dead ship', there would be a way to navigate and steer. “Even the black and grey water pumps back each other up,” adds Smith. “It’s all about belt and suspenders.”

If the focus is self-sufficiency, then tankage is paramount. Lacey Kay carries 8,500 litres more than the standard 26,500 litres. Few vessels even five or six metres longer can claim to carry that much fuel and therefore have such freedom to roam.

In the transformation from the Nordhavn 86 design, the hull of the standard Nordhavn 96 gained two metres and the swim platform one metre (for a total of 2.75 square metres of teak beach). This allowed for space gains inside including 1.5 metres in the saloon. Even the two-cabin crew quarters grew, creating more comfortable environs for Lacey Kay’s four South African staff.

The superstructure profile evolved as well. The pilothouse deck gained almost three metres, and the flybridge more than two. Other exterior tweaks included aligning the windows on the main and upper decks, extending the hardtop by 1.8 metres and changing the angle of its supports to be more vertical and to match the structures below. Nordhavn’s signature Portuguese bridge is still there, but it now hides a 470 litre fuel tank that supplies the two tenders carried on the bow — and there’s a pocket anchor configuration.

A cross beam was added below the aft end of the flybridge to support the extra weight of the superyacht spa pool that also has an additional heater to ensure the tub is ready to go within an hour’s request for its use. Along the perimeter of the flybridge are various refrigeration and freezer drawers, an icemaker, storage cubbies and a large Kenyon grill. The central table with its Sutherland dining chairs can be relocated to the forward deck, creating space for a dance floor, although the owner says that even with 30 guests aboard, they never felt the need to move any of the loose furniture.

Nordhavn prides itself on the extensive customisation that is available. For example, although the standard design for this boat features an impressive master cabin in the bow, Lacey Kay’s owners eschewed the upper saloon and opted instead to add a second master aft of the pilothouse, where their view was better and their privacy ensured. The owner-dedicated veranda in itself makes this a choice to be envied.

Another reason to have the master on this deck is the direct access to the Star Trek-like command centre in the superyacht wheelhouse. Twin Stidd chairs face five screens, some running Nobeltec and NavNet charting software, and a dashboard packed with equipment from a variety of brands, including Furuno, B&G, Icom and others. Multiple FLIR cameras assist when monitoring the engine room. The view forward takes in the twin Maxwell windlasses and the 4.2 and 5.2 metre tenders wedged on to the bow on either side of the Nautical Structures davit. Lacey Kay has two wing stations for close-quarters manoeuvring, from where visibility forward, aft and down to the water is excellent.

The interior colour palette is greige with touches of dark brown, creating a clean, contemporary and understated look. The interior is the work of Scott Cole, who was approached to do Lacey Kay’s styling because he had designed the owner’s previous Nordhavn 76. “The owner was very hands on throughout the project and has a genuine enthusiasm for design,” says Cole. “He has interests in the metals industry and asked if he could incorporate stainless steel inlays in the interior architecture. My answer was ‘absolutely’.”

Chromed stainless steel strips were fabricated and plated in the US, cut into strips and shipped to Xiamen. The inlays feature throughout Lacey Kay’s interior, adding an industrial feel to doors and joinery on nightstands and dressers.

“No matter the size of a boat, it’s still a boat and not a house and that makes things like electrical and plumbing fixtures seem out of proportion with the environment,” adds Cole, who scoured design houses worldwide before choosing perfectly sized shower fixtures and taps by Italian company Gessi and door hardware and handles by UK-based Turnstyle Designs.

Walnut on doors, lockers and wainscots combines with darker Alpi wenge in the saloon and dining room, which are offset with cream fabric-wrapped wall panels. The horizontal grain on the joinery, combined with solid wood corners, creates a casual style with practicality — hard corners are much more durable than veneer panels. The dining and saloon tables feature cross-grain patterns, a design element subtly repeated throughout the interior of Lacey Kay, including on the Majilite Novasuede headlining.

Cantalupi LED lighting was recessed deeply into the ceilings, evening out and softening the effect. Custom sconces throughout add warmth and architectural detail, and of special note are the two round ADG Custom Lighting pendant fixtures over the dining room table: the round metal structure and cream shade repeat both the stainless steel accents and the colour scheme of their surroundings.

The galley is completed in granite and marble and features brands including Sub-Zero, Bosch and GE Profile. A motorised partition rises from the worktop to close off the galley from the dining room for formal affairs. A recessed rectangle in the partition’s aft (saloon-facing) side awaits the installation of artwork. A separate coffee and tea station is to starboard near the stairs to the pilothouse. Here, guests can help themselves to drinks without disturbing the work going on in the galley and the presence of this station adds to the casual atmosphere the owners sought to create.

On test day, the sun welcomes us to San Diego Bay’s flat waters, where Captain Arnold manoeuvres Lacey Kay away from the dock using the portside wing station. Tanked up and provisioned for her departure the next day for points north (ultimately Alaska), the yacht glides along the bay like a vintage Cadillac; solid, self-assured and unapologetic. There’s nothing hesitant or bashful about her. To a shore-side observer, it must be clear that this yacht, with her bulbous bow parting the water, is meant for business — of the long distance, weather-be-damned variety.

Twin 600hp Caterpillar C-18 ACERT engines push Lacey Kay to a top speed of 11.4 knots at 1,807rpm with the throttles wide open. Her sweet spot is more in the nine to 10 knot range and, when dialled down to eight knots and 25 per cent engine load, she burns eight gallons per hour. Ignoring things like headwinds and seas and a possible counter current, theoretically Lacey Kay could cover 8,500 nautical miles, even with the added consumption of her generators, and never need to visit a fuel dock.

The 50-inch propellers are fixed to Y struts positioned aft, well away from the fibreglass keels. This reduces cavitation — the formation of bubbles — helping fuel economy and reducing noise. We hear virtually nothing in the pilothouse and even the saloon on the main deck is hushed and pleasantly vibration-free.

Owing to a reconfiguration in the hull to squeeze in the additional fuel tanks, Lacey Kay has four 0.8 square metre stabilisers rather than the twin 1.8 square metres that are standard. “Coming up from Baja, we had 12ft seas and 30 knots of wind and we had no problems,” says the captain. “She’s a proper explorer vessel so we can go anywhere without too much worry about a weather window.”

While Lacey Kay is only three metres longer than her progenitor, with her capacious interior, impressive range and styling, the length extension is where the comparison ends. She’s a completely new beast. And with an itinerary that runs from Mexico, Alaska and Bermuda to New England, this superyacht is amply equipped to take on the world.

First published in the September 2017 edition of Boat International