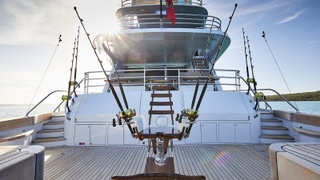 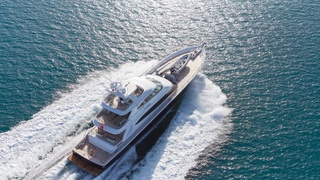 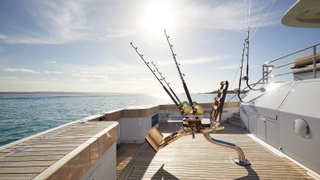 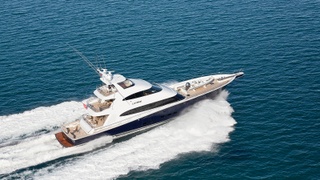 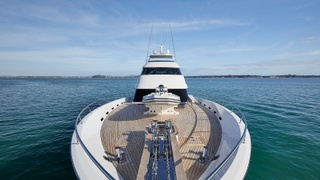 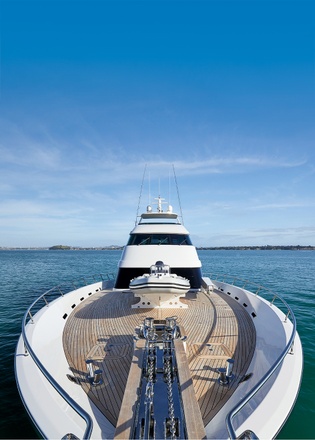 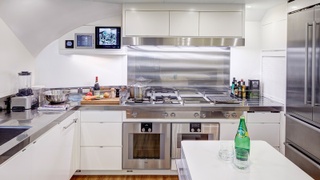 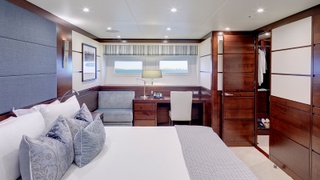 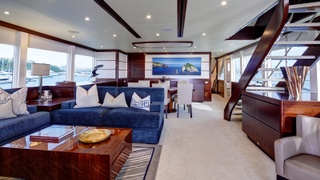 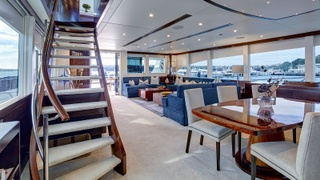 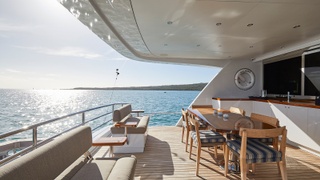 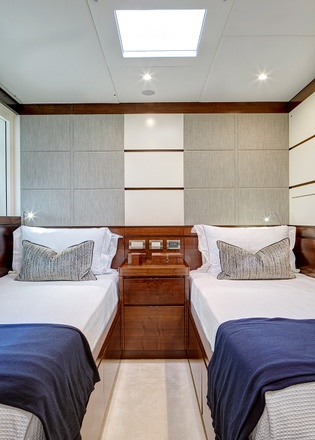 Lanakai: On Board the 39.5m Maxi Sportfish Yacht

The brief for Lanakai was simple: keep the weight down, the lines refined and the fish plentiful. Ivor Wilkins is hooked by a lean, mean fishing machine that boasts beauty as well as brawn

Big-game fishing was never more glamorised than by Ernest Hemingway’s vivid dispatches from Cuba about mano-a-mano battles with great fish – “rising, shining dark blue and silver, seeming to come endlessly out of the water.” His beloved 11.6-metre Pilar, purchased with the cash advance for an Esquire article, became the prototypical fishing machine, “sweet in any kind of sea”.

Since that time, sportfishing boats have evolved into a distinct type, sometimes exaggerated into caricature. Michael Peters, who has designed many of the breed, takes a tongue-in-cheek poke at the “voodoo” that has evolved: acres of foredeck without non-skid surfaces; no bowrails (they’re for softies); and towers so tall there’s a risk of nosebleeds. Peters notes that half of all sportfishing boats are bought with no intention of ever going fishing. “They get bought for their image and manly looks,” he says. “It’s the rich man’s pickup truck and nothing looks badder at the dock.”

With the launch of Lanakai – a 39.5 metre sporting 6,300hp of grunt under the hood, 18-metre Rupp outriggers and bristling with mechanical and electronic devices to hunt denizens of the deep – it may be tempting to mock Peters for drawing the baddest sportfisher of them all. Built entirely of carbon fibre, this 30-knot fishing machine is no idle dock-bound poser, however. In just 15 months, she has logged 8,500 nautical miles and put around 1,000 hours on her twin MTU 4000 series engines.

When the owner flies in with family and friends to rendezvous at some remote location, the engines are already warmed up and ready to go. As they step aboard, the lines are cast off and the chase is on. “The schedule is pretty hectic,” skipper Danny Bos says. “Between the fishing trips and maintenance, we are always busy. We are on track to complete about 110 days at sea every 12 months, so we clock up a lot of miles.”

“This is my primary passion,” the owner says. Lanakai, which was built at Yachting Developmentsin New Zealand, is his fourth boat, and the second designed by Peters. For a time, the owner did consider a displacement-type superyacht, but his family quickly disabused him of that notion. “They knew it would drive me nuts, just floating about. So we tried to create something approaching superyacht standard, with all the luxury bells and whistles, but basically a sportfishing style.”

Achieving this goal involved a disciplined collaboration between the owner, design studio and yard. In the process the overall length grew from 34 metres to 39.5 metres, primarily to accommodate larger engines and upgrade from fin stabilisers to twin Veem gyro stabiliser units. “I experienced gyro stabilisation on a boat I once chartered in Tahiti,” the owner explains. “I was so impressed, I decided we had to make the switch.” “That comes with a lot of extra weight,” Peters notes. This additional burden at the back of the boat was accommodated by lengthening the cockpit and rearranging some of the internal tankage.

“We did weight studies, which set the benchmark to achieve the kind of performance the owner was looking for,” Peters says. “Then it was up to the yard to do the engineering to make sure it all worked out.” Initially, the intention was to build Lanakai in aluminium. “We spoke to a couple of yards,” the owner says, “but their estimates came in a lot heavier than the target. Michael Peters warned us it would never get out of the water.”

Enter Yachting Developments, based in Auckland, New Zealand, which has gained a reputation for composite construction. Its portfolio is primarily focused on fast sailing superyachts, but also includes the 27-metre sportfisher Satu, built in 2012, and a 33-metre Warwick sportfisher currently in build.

Yachting Developments, based in Auckland, New Zealand, has gained a reputation for composite construction

“The decision to go for an all-carbon construction came about because we had to make a contract commitment to weight,” says Ian Cook, Yachting Developments’ managing director. “In the process of an extensive analysis of how to achieve that, it transpired that it was actually more economical to build in carbon than in standard glass composite materials. Five years earlier, carbon would have been prohibitive. However, it is produced much more for the aviation industry now and that has brought the price down,” Cook says. “Also, for the same strength you use less carbon, which means less laminating, which saves time and labour costs.”

The finished boat came in at 6,800 kilograms under contract weight and the combination of the larger MTU engines and light weight have delivered a significant performance bonus. “I wanted a genuine 25-knot boat,” the owner says. “What has been delivered gets very close to 30 knots and we can cruise at 23 to 24 knots all day long if we want.” In passage mode, 10 to 12 knots is the norm. For Cook, who started his boatbuilding career with racing yachts, weight reduction is a simple article of faith. “The lighter something is, the less energy it takes to move it around,” he says.

Much is made of the carbon fibre construction, but Cook points out that the hull and superstructure make up only 14 per cent of the total weight. The rest is taken up with furnishing, machinery and equipment. “You are basically building a hotel,” he says. “It must make its own power, make its own water, treat its own sewerage and be completely self-sufficient. All that comes at a certain weight.”

Lanakai’s very purpose takes it far off the beaten track. Consequently, self-sufficiency demands carrying not just long-range fuel (42,000 litres) and provisioning capacity, but also a high degree of redundancy through duplicate equipment – so more weight. That, in turn, demands the shedding of weight in all other areas. Furniture and joinery including marble surfaces, for example, utilise veneers over lightweight plywood or cored panels, without compromising the sense of substance to the touch. “The effort that went into saving weight was incredible,” the owner recalls. “Everything was measured and assessed, down to the diameter of the handrails. Weight is always top-of-mind. They certainly kept me on my mettle in terms of what we could and could not have.” Carbon’s virtues of light weight and stiffness can create a disadvantage in transmitting sound and vibration, demanding equally close attention to meeting contract decibel limits. Around the engine room, for example, E-glass panels instead of carbon were used to dampen sound. “We even put lead over the engine room,” Cook says, shrugging at how counter-intuitive that was to a strict weight budget.

The suites were built in modules enclosed within a sound box and lowered into the hull on to rubber insulators. Again, the owner’s expectations were well met. “We have had the boat in fairly torrid conditions,” he says. “I have been on others where everything would be squeaking and rattling. That is not the case with this boat. It is something I thought hard about, but it really has not been an issue.” At rest, this athletic vessel takes on a more nurturing personality, cosseting its inhabitants with great comfort and style. Spread over four decks, the accommodation and entertainment areas are furnished to a very high standard. The ambiance is of casual elegance with an alliance of finely crafted American walnut joinery and muted fabrics. The saloon and dining space are contained in a spacious room with large side windows admitting plenty of light. The lower deck incorporates the full-beam owner’s suite amidships, with a VIP suite forward and two further guest cabins straddling a companionway in between.

Above the main saloon is the upper saloon with bar, lounging area aft and the main bridge. Here the philosophy of redundancy abounds, with multiple displays able to interchange all navigation and SeaTouch monitoring functions. Nestled in the electronics are powerful hunting tools in the form of a Furuno depth sounder combined with a 360-degree Furuno Search Light sonar. This is like an underwater periscope, which can extend down and then sweep horizontally in any direction, probing more than 760 metres for big game.

Towering more than nine metres above the water is the flybridge where Bos uses his skills at the throttles and thruster controls, judging wind and current in a deft ballet to deploy all the boat’s powers in the hunt. Meanwhile, below on the aft deck, the fishers can scan the underwater intelligence displayed on monitors to adjust the depths of their bait.

Over long days often in rough conditions, the Veem gyros, working in concert with Humphree Interceptor trim tabs, more than justify their inclusion. “Critics said we would never catch a marlin on a boat this size,” Bos recalls. “They said it was too big and not manoeuvrable enough. The first day we went game fishing, we landed a nice striped marlin before lunch. She turns on a dime and goes backwards at eight knots without any fuss.” The split-level aft deck is action-central in this vessel. From the fixed boarding platform, popular for bait fishing, to the live-bait tanks and huge refrigerated fish chests, to the Pompanette fighting chair, everything has been calculated for the efficient capture of big fish.

As weight savings were paramount for the yacht to meet its performance objectives, all joinery and stone surfaces are a thin veneer over plywood or cored panels

Copious tackle lockers, plus a dedicated game room for dive compressors and the extensive arsenal of Shimano rods and reels speak to the attention devoted to every last detail.The step half a level up to the main aft deck allows non-combatants to oversee the action from two sofas with swing backs for forward or aft viewing. Sheltered by the overhang of the upper saloon above, a large dining table and bar is where the catch of the day can be enjoyed, prepared by chef Nathan either on a massive stainless-steel aft deck barbecue or in the spacious galley on the main deck. “We like to spend our time outdoors,” says the owner. “Most of our meals are around the aft deck table.” In this sense, the extension made to accommodate larger engines and big stabiliser units worked to the boat’s advantage, opening more aft deck space and resulting in beautifully balanced lines. For such a muscular vessel, the proportions assemble in sweet harmony.

“The aesthetics were huge for me,” the owner notes. “The sheerline, the rake of the superstructure, the curve of a roofline – I am pretty fanatical about those details.” In keeping with the owner’s wishes, Lanakai combines luxury, sport and technology in one well-balanced package – it won’t very often just be “floating about”.