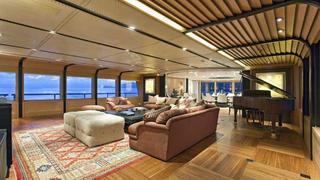 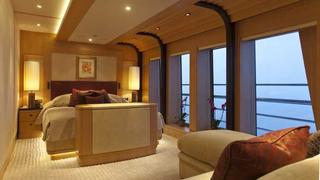 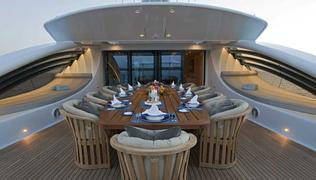 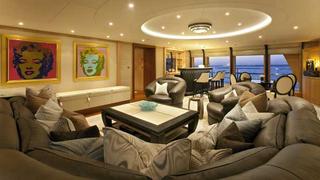 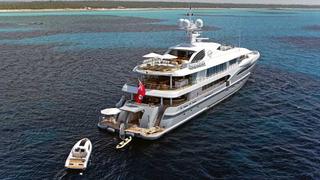 The first 212, named Imagine after the John Lennon song, is modern in looks, with a high sheerline that sweeps down to her stern, emphasised by the topsides painted in a subtle grey that tricks the eye into thinking her smaller than her five decks. Tim Heywood has worked his magic with curved, sweeping, feminine lines that flow, dip and provide long eyebrows over the VIP cabins.

The aft deck contains a small beach club that can be used by swimmers and yet retain its privacy, with tenders tucked out of sight in a self-contained garage with gull wing doors on both sides of the hull, a good solution for launching in most conditions.

The main deck is entered through a sophisticated circular dining area, which can be opened or closed as required with glass sliding doors and curtains. Beyond is a cavernous saloon, complete with baby grand piano and furniture placed symmetrically along the centreline, from where guests can enjoy views out of large windows on either side and art on the perimeter walls.

From the foyer, a glass elevator runs through four decks. On the upper deck, the VIP cabins lie to starboard and port. Long and narrow with enormous windows, they have French doors that slide back allowing guests to stand on the eyebrows created in the superstructure and lean against a solid rail.

An impressive floating staircase encircled in stone and topped with an atrium leads all the way up to the sun deck. Forward is the standard spa pool with sunpads. Behind this is a wet bar with two parallel counters – one facing the spa pool and the other forming the forward side of the swimming pool with bar stools in the water. For those who want to remain trim the superstructure midships contains an air-conditioned gymnasium packed with the latest equipment.

Aft, curved loungers have been moulded into the superstructure wings to port and starboard with a view through the glass between the slats in the design. Between these in the shade of the fixed Bimini is a large alfresco dining table, well sheltered from wind and sun.

After a touch of sun the more conventional upper deck saloon, which doubles as a cinema room with a screen rolling out of a banquette, is the ideal place to relax.

On the lower deck are four adequate cabins on the centreline. Large escape doors have been integrated into wardrobes for easy access to the crew deck forward.

Crew cabins are a reasonable size apart from the one furthest to the bow where two crewmembers are squeezed into a small space which really isn’t practical. A crew passage passes underneath the guest cabins allowing the engineer to access the mechanics and engine room without any interference with the running of the yacht. There is just one crew mess so eating and socialising is done in the same place. The laundry is well-equipped and is off the crew mess. The chef’s domain is on the main deck with a dumbwaiter for transporting food up to the top decks.

As you would expect on an Amels yacht the engineering, wiring and systems are all easily accessible and well labelled. It is becoming increasingly important for owners to be seen to be as green as possible and included are genset soot filters. What is also noticeable is how quiet she is under way – the noise levels in the cabins have been recorded at less than 50dB(A).

The bridge area has a walkaround console, separate radio room and good-sized captain’s cabin aft. Visibility is good with moulded-in bridge wings used for docking. An integrated bridge system has been well thought out, and back-up systems lurk in hidden drawers beneath.

For all intents and purposes this is very much a custom yacht, which is well-engineered and coming in at around 30 per cent less than the cost of a fully custom yacht of the same gross tonnage. The build time is two years versus up to five years. Winch concurs that this is ‘very different from a client lead boat’ but what you get is a ‘world-class custom yacht with a time advantage’.

The second and third Amels 212 are now under construction.

Cover Boat for the July 2011 issue of Boat International Magazine