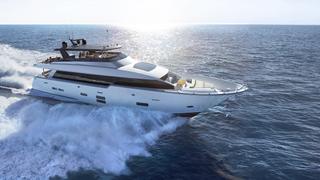 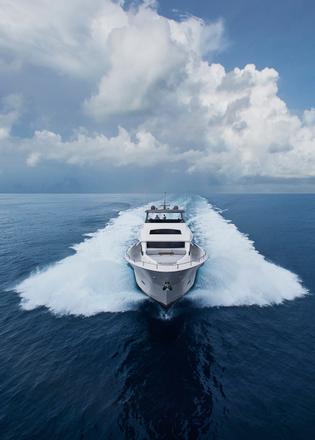 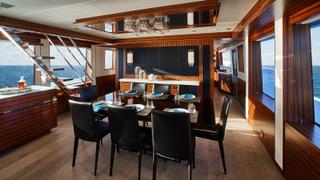 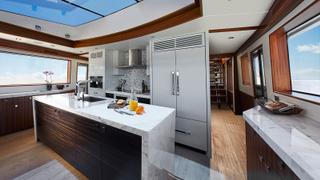 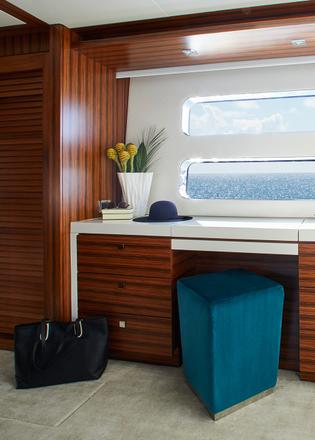 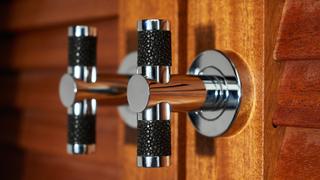 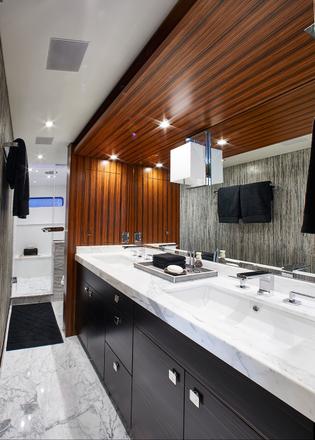 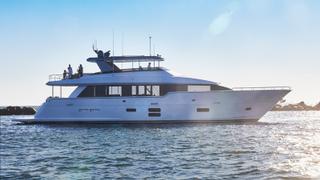 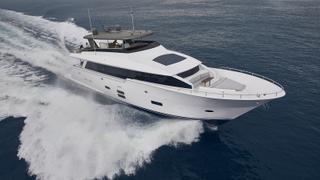 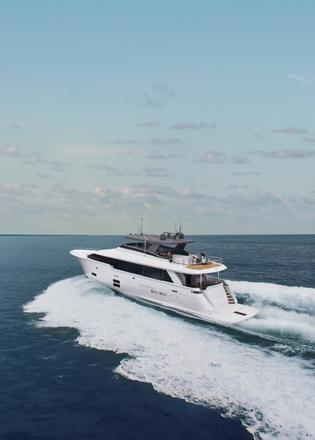 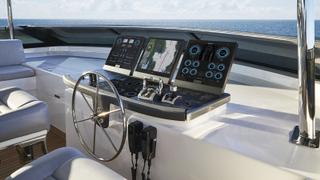 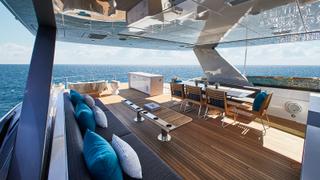 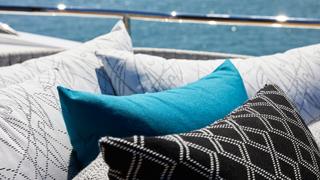 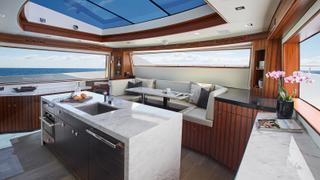 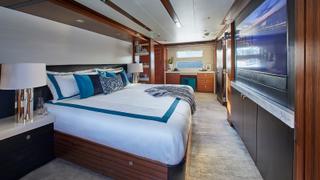 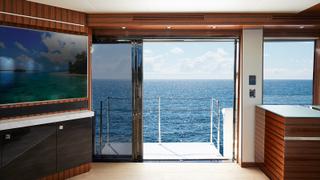 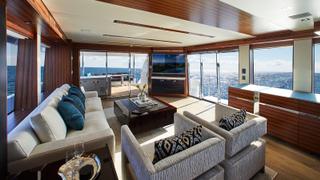 “You don’t need instructions for your iPhone, do you?” I am on board the brand new 27.95 metre Hatteras M90 Panacera when her design engineer, David Clubbs, poses this question. A rhetorical query, of course, because the answer is obvious: no. Hatteras started with such a curiousity — could you make a yacht as easy to use as our ubiquitous smartphones?

This quest for intuitive design solutions inspired the US builder’s latest motor yacht, which was designed in house. Intelligent simplicity is a theme that carries through both the innovative tech found on board and the clean styling and open-plan layout, which updates the M90 from her Hatteras sistren of old.

The modern style is more in keeping with recent Hatteras launches, such as the M75, but even more sophisticated. The exterior takes the classic characteristics of traditional Hatteras yachts to the next level with a great expanse of windows running the length of the superstructure defining the exterior.

Take a closer look at the Hatteras M90 Panacera

The Hatteras 90 is packed with innovative features, including a total ship management system, which monitors and controls every system on the ship. When technology is working as it should, it can make our lives abundantly easier. But what about when technology fails the yacht owner? Or perhaps, more simply, overwhelms them? Hatteras wanted to create a yacht that was as user-friendly and intuitive as possible, one that could be controlled just as easily by an owner as the captain.

To make this happen, the North Carolina-based builder developed technology that is the first for Hatteras, aptly named HattCon. The system was developed so that the entire boat could be controlled from the helm or the HattCon application. Multiple controls are integrated into one system, which is easier said that done with vendors coming from all over the world.

“They speak different electrical languages, they have different codes, so it’s a challenge to find a tank level sensor that can integrate into a system the same way as a smart glass window, autopilot, steering system and navigation can,” says Clubbs.

The result is an intuitive interface system, so no matter what the owner or crew is doing — transferring fuel, dimming the smart glass on the massive skylight over the kitchen or running the bilge pumps — it’s all the same ease of functionality. “It’s a very intuitive boat to use,” says Clubss. “This boat works for you instead of you having to work for the boat.”

Hull one was built on spec and exhibited at the 2017 Fort Lauderdale International Boat Show, while hull two, an enclosed bridge model due to launch in early 2018, was sold before hull one even splashed.

It was the enclosed bridge that sealed the deal for the long-time Hatteras customer who was stepping up in size from a Hatteras 80. Hull three is also underway, and at the time of the Fort Lauderdale show, the verdict was out on what type of bridge deck she’d have: open, enclosed or otherwise.

This deck is just one of the areas where the semi-custom builder allows for a great deal of flexibility. If the customer comes on board early enough in the build stage, they can choose whether they get a hard top, fully enclosed bridge, soft top or even a convertible top with a portion that slides open to let in fresh air. Air conditioning is standard on the flybridge, so no matter the option that owners opt for, the space can be cooled to suit their taste.

The design of this space is also highly customisable, as Hatteras designer Cullen Moser points out. Hull number one has al fresco dining for eight, a drop-down TV and comfortable lounge seats. The table, and all the tables inside and out on the boat, is custom made by Marine Tables out of Savannah, Georgia, while the chairs are from Summit Furniture.

As Moser tells it, this layout is far from locked in: “When you purchase the 90, you have exterior furniture options,” she says. “You can do the dining table or can opt for a walk-behind bar, like you see on the Hatteras 100, or perhaps a bigger lounge area.”

Further areas for outdoor enjoyment can be found in the bow lounge seating area and the aft deck dining table. For a yacht of her size, she packs in an impressive amount of dining options, with the flybridge and aft deck table seating eight, a dining room in the open-plan saloon also seating eight, and then the more casual breakfast nook in the huge country kitchen, set forward of the main saloon.

In contrast with the concealed HattCon system, the kitchen is all about innovation and wow-factor that you can see. The double-height ceiling features a giant 7.15 square metre curved skylight stretching across the roof. The glass is dimmable, UV reflective (for heat reduction purposes) and strong enough to support the weight of several people.

Moser is responsible for the interior design, which is open and bright, benefitting from natural light cascading in through the skylight and the ample windows in saloons and cabins.

The guest accommodation is all situated on the lower deck, with a full-beam master suite set amidships — arguably the most comfortable spot on board most boats — two twin cabins to port and starboard and a VIP forward, all en suite.

The name Panacera is meant to evoke a feeling a long, sweeping panoramic views – the sense of awe when you look out over the sea. This is found in the M90’s saloon, which has a feeling of openness with huge picture box windows, a sliding glass door and an optional fold-down superyacht balcony to the port side.

Rather than just staring at TV screen, the main sofa looks out to this view of the open waves, the sea air allowed to gently blow in — it’s the main reason for being on board, after all.

The brief for the interior was to continue to modernise the more traditional, older Hatteras style with a contemporary new look, as seen on the M75, and the updates have proved popular among Hatteras owners. Moser took cues from the M75 and went with a contemporary look for the M90 — highlighted in warmer toned woods and modern furnishing and joinery choices.

The main saloon is indeed contemporary and cool, with chic grey sofas, matching chairs and wide, longitudinally planked white oak floors. “Five to six years ago, you would’ve had carpet on a Hatteras,” Moser says. Clearly times have changed.

The walls are a rosewood in satin finish, while some of the of furniture is in high-gloss, but it’s not your typical American dark cherry — instead the grain is decidedly different, a type of ebony that emits a warm tone and has eye-catching pattern that resembles a Tiger’s Eye stone. Lastly, some of the furniture and door frames are made of a darker wenge.

From the fresh new facelift to the innovative tech, the Hatteras M90 is certainly a welcome update to her builder’s fleet and a fitting addition to the company’s yacht building heritage.

“This is a great example of what our new motor yachts are about,” says Moser. “We are a traditional company, that went contemporary and is moving forward all the time.”