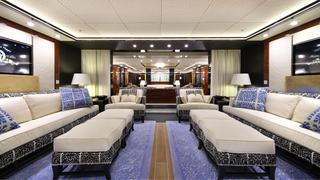 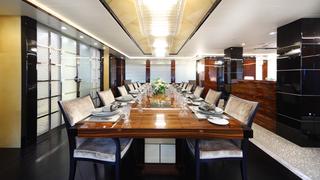 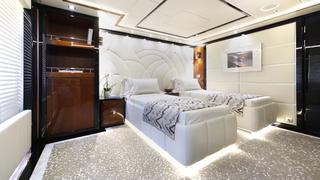 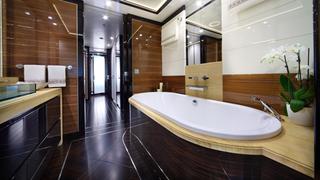 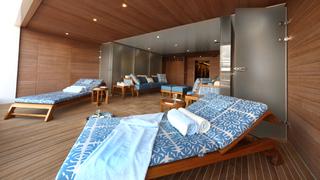 Meridian (ex-Maidelle) is a boat of reflections… literally. High-gloss panelling, mirrors and lighting are designed to enhance glint. In her modifications and interior décor, Meridian also reflects the individual tastes of her owner – a factor that has made each of the three boats in ICON Yachts’ 62.5 metre series quite different. But at the most basic level, this yacht’s platform mirrors those of her series predecessors, Icon and Baton Rouge (both 2010 launches).

This platform was developed by Jen Wartena and Wim Koersvelt, who founded ICON Yachts in 2006. It consists of an engineering package and hull design by ICON, a general arrangement designed between ICON and Redman Whiteley Dixon (RWD), with a fixed central staircase placement and bridge position. As Wartena puts it, in terms of layout ‘up to the main deck they are 90 percent the same’.

But upwards of that, the steel and aluminium boats diverge. The most unusual is Baton Rouge, on which exterior decks were significantly expanded and Tim Heywood created a volume-maximising superstructure, leading to a very different layout and look from Icon.

In terms of both GA and appearance, it is much easier to see the family resemblance between Icon and Meridian, both of which have exterior design by RWD. ‘The outside style was a close sister-ship to Icon, with a crisp, contemporary finish to the lines,’ says Douglas Hynd, who managed the Meridian project for RWD. ‘Really the only difference came in the painting. Icon’s got a dark graphite hull, with a white superstructure and big black bands around the windows, whereas they wanted a much simpler all-white finish for Meridian.’

To set off this white body, Meridian’s interior designer Cristiano Gatto gave her green tinted windows, which do not affect the colour of light coming in, or the scenery when looking out. Inside, he tweaked the customisable parts of the layout to provide the entertaining areas and family privacy the owner desired. For decoration Gatto employed a glamorous art deco style, with oriental influences. Within this he created three ‘moods’, corresponding to different spaces. ‘In the main saloon and guest areas we used dark woods and marble to make them more formal, although still cosy,’ he says.

Upstairs on the main deck the formal glamour is most apparent. The lobby is floored with an immense slab of Portoro marble – black, shot with white and gold streaks, that took two years to find. ‘To magnify this effect we put a series of mirrors on the ceiling,’ says Gatto, while light filters subtly into the space through a shoji screen.

Aft, the dining saloon is a breath-taking space. The centre-piece is a 14-seat rosewood dining table with stainless steel, parchment-covered legs. The central section can be removed to create two smaller tables and like all furniture on board except the sofas, it is custom made.

Further aft is a chic ivory seating arrangement and the whole space is well lit by wide, deeply recessed windows. Further back lies the enclosed ‘veranda’, for which Gatto has taken space from the aft deck and from the saloon. It features lots of comfortable seating in blue and ivory as well as teak decking – in both these ways it seems thematically more part of the exterior spaces than the interior. It is separated from the saloon by sliding glass doors and from the exterior deck by curved ones.

The split-level owner’s suite is accessed via a private corridor leading forward from the main deck lobby. This opens into a full beam space with a large bed to port facing a wall-mounted television, and to starboard a round of ivory seating makes the most of natural daylight. Forward is a his and hers en suite with central basin, bath, cupboards, steam shower, rain shower and heads. The space is clad in a tactile honey-coloured Timber Silk stone.

From the private corridor is a stairwell padded with a soft, golden-brown nubuck-like brushed leather. It leads up to the suite’s second private space, a lounge with fantastic views and comfortable seating, as well as a bar, a cabinet with pop-up television and a desk. Forward of this, the useable area of the forward deck has been enlarged to offer a private exterior space with seating and sunpads.

In the upper saloon, the space is also divided into intimate arrangements. To port there is a round of seating facing inboard, towards a cabinet with a large pop-up television. This indicates the area’s separation from the more formal starboard seating arrangement. It means that in the same room some guests can enjoy a cinema experience, while others chat. The forward wall is covered in panels of golden goatskin parchment that adds to the warmth of the woods used in this space. On the aft deck is fixed seating and a dining table for 12.

Meridian’s exterior decks are all intelligently arranged. The main deck aft has minimal furniture – just one round of fixed seating – so that more guests can be accommodated for a party. The bridge deck aft features a spa pool and sunpads from which guests can enjoy the views. The upper deck is an intimate and simple space with a round of sunpads.

But the most impressive outdoor space is the lower-deck beach club. The basic design is identical to that of Icon, but where Icon has a bar and lots of seating, this space on Meridian is relatively clear, so it can be used to keep and launch water toys. To port is a gym, to starboard is a storeroom, plus shower and day-head.

The main space of the beach club is part of Gatto’s third ‘mood’, with teak decks and pale brushed natural teak panelling for a ‘beachy’ atmosphere. ‘We were trying to create a bit of the exterior mood; more fresh, relaxed,’ says Gatto.

The same can be said of Meridian’s engine room. It’s spacious, neatly wired, with labelled pipes and safety rails around the two MTU 12V 4,000 M71 engines, offering 2,480hp each – and 6,000 nautical miles at 12 knots. The engineer has a good-sized office with a monitoring screen, which is repeated on the bridge.

Perhaps the most interesting thing about the engine room is how it was built. ‘There’s an enormous number of complex technical systems on board a yacht, all integrated into a very small area,’ says Wartena, who has worked in shipbuilding and at Feadship. ‘The most inefficient place of work is on board a boat, because you need to bring all these specialists into that small area.’

ICON builds many yacht installations in workshops with good light and good cranes, using the best people, attracted by better working conditions. It makes the build more efficient and faster. ‘Eighty per cent of the hours spent for an engine room installation are not spent on board. The traditional way is more like the other way around,’ he says.

While Meridian is a series boat, she is anything but standard. The attention to detail in the platform, décor and the execution of both are extraordinary. On the technical side, a good example is the cooler systems for the freezers – the units have not being placed with the freezers, but in the engine room to reduce noise. On the decorative side, the LED lighting system is notable. ‘We have designed the spotlight bulbs to have a warmer effect and large spectrum of light than normal, to make the rich wood more alive,’ says Gatto. Throughout the boat the floor spots are reflected in the dark, high gloss wood of doors so that corridors seem to stretch onwards. The ICON team is very proud of the yacht.