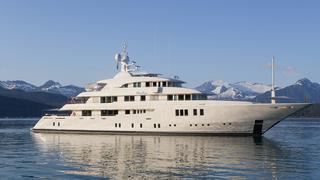 The 62.5 metre motor yacht Meridian, listed for sale by Rob Newton at Superyacht Sales & Charter in Fort Lauderdale, has been sold.

Previously known as Maidelle, she was built in steel and aluminium by Dutch yard Icon to a design by Redman Whiteley Dixon and delivered in 2013. A voluminous interior accommodates 16 guests in eight cabins consisting of a split level main saloon on the main deck with a private saloon, a VIP suite on the upper deck with a private sitting area, four doubles and two twins convertible to doubles and all with en suite bathroom facilities. In addition, an Apple television video server system is available in the cabins and there is WiFi internet access throughout.

Designer Christiano Gatto used a refined choice of woods like mahogany, rosewood and dark walnut in the main deck saloon and guest cabins along with ebony and canaletto walnut in the owner areas and upper deck saloons, all with high gloss finishing. The bridge deck and beach club areas have wengé and teak treated with semi-gloss and brushed finishing. These woods are balanced by the presence of natural stones such as Sahara desert stone, black meteorite marble, travertine and dark brown emperador marble.

The spectacular main saloon measures no less than 17 metres in length and has a lounge with plentiful seating, a bar, state of the art entertainment system and a formal dining area with seating for 14 guests. The aft main deck has semi circular seating, two coffee tables and a wet bar while the upper aft deck offers more al fresco dining on upholstered chairs arranged around a circular table. Up on the sun deck is an outdoor lounging area with seating, sun pads and a Jacuzzi tub.

An expansive beach club has upholstered seating around a coffee table and has a fully equipped gymnasium. Twin 2,480hp MTU engines give her a cruising speed of 14 knots and a range of 6,000 nautical miles at 12 knots.