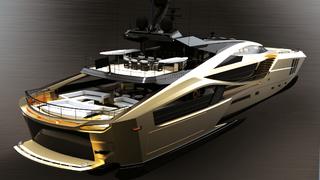 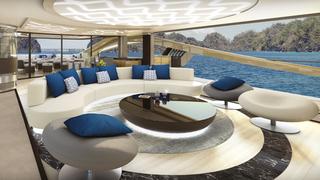 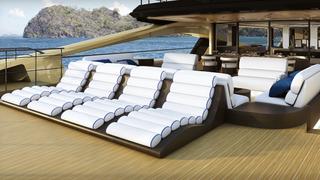 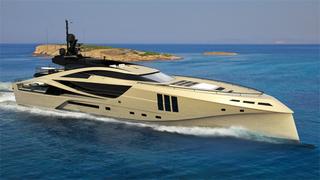 While there’s plenty of innovation in Palmer Johnson’s Super Sport 48 metre, the refusal to compromise is at the core of this carbon-fibre motor yacht, currently in build for delivery in the autumn of 2013.

‘The idea was to design a next generation Palmer Johnson superyacht that freed itself from the conventional compromises that yacht design generally seems to accept,’ says Timur Mohamed, owner of the iconic American yacht brand and former first-class cricketer. ‘Usually, efficient means slow; space and comfort mean a floating home with a forgettable design. Further, we decided to aim for exponential transformations in operational performance and the onboard experience, not incremental improvements.’ Finally, Mohamed wanted all this wrapped up in a package that was still recognisable as a muscular, sporty Palmer Johnson.

Mohamed found the concept that answered his requirements in 2010, in the notebooks of his new designer. Berkeley March, a finalist in our 2008 Young Designer of the Year Awards, had designed a concept that he thought might fit the bill during his dissertation on yacht and powercraft design at Southampton Solent University, UK. ‘I knew it had some legs at the time, but it’s about having the time and backing to improve and develop it,’ says March. ‘It creates the space and stability of a trimaran but within a monohull format.’

Perhaps the most notable features of the design are the sponsons. These project from both sides aft, increasing the width of the yacht’s aft end, but leaving the overall profile sleek and distinctly Palmer Johnson in style. ‘The width increases stability but also it creates four to five times the dampening [motion reducing] characteristics of a monohull,’ says March. ‘The natural roll-rate amplification is a lot less. Hence not needing gyro stabilisers, so you’re taking away weight.’

As this attention to weight suggests, the Super Sport is intended to be a fast boat for its size, as well as a comfortable one. An efficient hull with a bulbous bow was vital to both of those characteristics. The most significant nod toward speed is that the Super Sport is to be built entirely from carbon composite. The benefits are obvious – it’s lighter than aluminium and stronger than steel – but with a complex construction method involving moulds, it is a material usually reserved for racing sailing yachts. It is an unusual choice for a motor yacht and for Palmer Johnson, which is famous for its aluminium construction.

Palmer Johnson is having the moulds, hull and superstructure made at a Norwegian builder that has been working in the material for 15 years. The yacht will then be shipped to the US yard for outfitting and finishing.

The look of the yacht, as well as its properties, was important. This emphasis was part of Mohamed’s desire to ‘expose the soul of the yacht and express it in increasing layers of enjoyment, capturing the intense emotional relationship that one should have with a yacht’. He believes that while the experience of a boat certainly includes the views from the aft deck or the saloon, it should start when tendering towards it: ‘An owner should get goose bumps every time they look at their yacht.’

As well as the owner’s suite forward on the main deck, with full height windows (Mohamed was keen to have as much full height glass as possible, particularly in the main saloon), there are four guest cabins on the lower deck, as well as a tender garage, toy garage and beach club. There’s a bridge deck with upper saloon, plus a spa pool and optional helms position up top. In all the yacht will sleep 12 guests plus eight crew members and a captain. All this had to be contained within a structure that retained the sleek Palmer Johnson look.

Featured in the October 2012 issue of Boat International magazine.