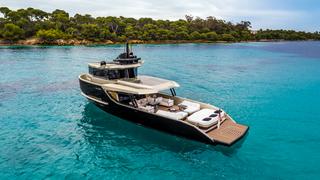 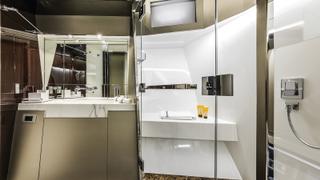 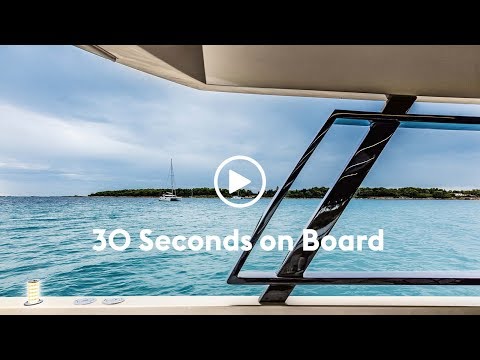 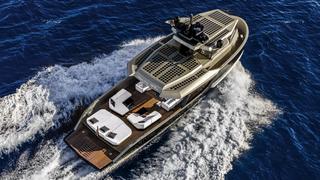 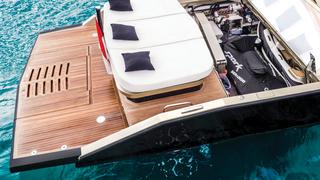 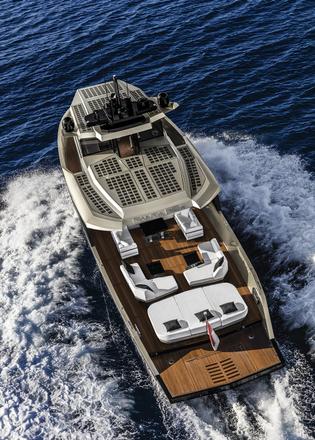 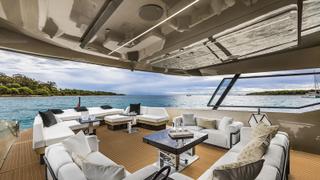 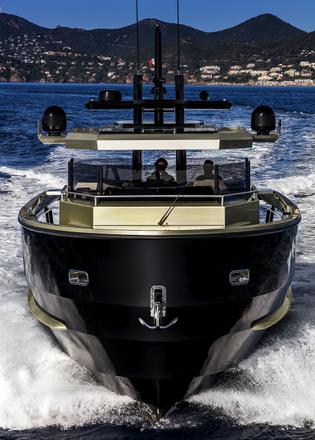 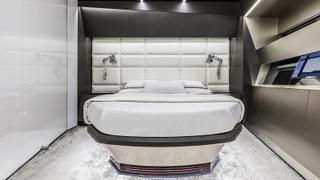 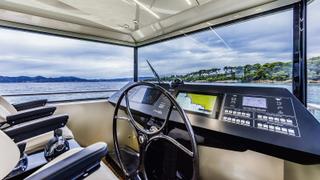 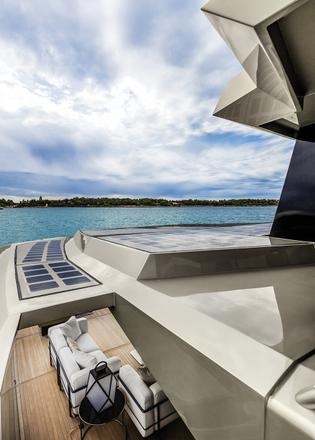 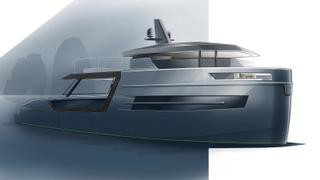 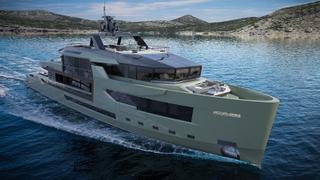 Panta Rei III: Inside the pocket dynamo from Arcadia Yachts

It’s not every day that we publish a story on an 18 metre yacht — but then the Sherpa is no ordinary yacht. This innovative dayboat was launched by Arcadia Yachts in Naples just over a year ago, but already it has sold seven hulls (the third, Panta Rei III, is pictured here) and spawned a second range in its image.

With a towering bow, workboat bridge and aft deck at water level it resembles a survey vessel, ready for anything. But though the Sherpa is a capable navigator, with a 1,000 nautical mile range, that is not its calling. “She is a unique party boat,” says yard owner Ugo Pellegrino simply. “We have often had 20 or 30 people on board and she doesn’t feel cramped.”

That’s thanks to the huge social areas, where Arcadia’s design team has been lavish with the boat’s real estate. First, there’s a nine square metre bathing platform, which can include an optional transformer. “It’s literally just a step above the water,” says marketing director Francesco Ansalone.

Climb a few steps to the cockpit, and you begin to understand how 30 people could get lost on this boat. At 41 square metres, it provides the same space as Arcadia’s much larger A85, stretching far in under a deep hardtop and out to the full 5.5 metre beam.

The boat’s radical design, with its flybridge and superstructure perched right in the bow, frees up most of the main deck for the cockpit. “We promote a main ample convivial area instead of several small ones,” says Pellegrino. “In terms of convivial space Sherpa offers 63 square metres of total area, which is 44 per cent more than the average 17-18 metre yacht.”

In Panta Rei III, which is in the yard alongside three other Sherpas for winter storage and maintenance, this space is split between a huge sunpad facing aft and a series of connected sofas and tables. It feels as if someone sliced off the upper decks and removed the side glazing.

With 10 speakers around the boat, retractable cleats and pop-up LED lighting, this is a floating entertainment space of impressive proportions. “It’s like being on board a megayacht without the same costs and being much more agile,” one owner tells us.

Nor has Arcadia neglected storage for toys: a 23,000 litre tender garage is revealed under the cockpit sofas at the flick of a switch. Hydraulics raise a large deck section (sofas and all) to the vertical, allowing a hidden davit to swing Jet Skis and a tender of up to 2.85 metres up and over the side.

There’s more than enough room to store diving kit, windsurfers and wakeboards — plus enough crates of beer to lubricate your 30-plus guests. Not for nothing is the Sherpa branded a “pocket megayacht”. Or, as the yard’s delivery skipper Mario de Camillis put it, a boat that is “enjoyable like a toy and reliable like a ship”.

But, of course, the boat is no Tardis, and the space you gain in the social areas you lose in the accommodation. On the main deck, there is a well appointed owner’s cabin and an impressive marble-clad shower room, which “makes me feel like I am in a spa”, says one owner.

The finish in Panta Rei III includes white leather panelling by Poltrona Frau, a complex fabric-like laminate that mirrors the “silver sand” of the exterior gelcoat (chosen to match the owner’s Rolls-Royce) and dark oak so highly varnished that it resembles glass at first glance.

There’s also a narrow twin with a dayhead, although this cabin can be converted into a seating area for the main cabin if desired. Dimensions here are more akin to those found on a sailing boat of the same size — comfortable but not lavish.

Though it is marketed as a dayboat, several Sherpa owners cruise in comfort overnight. Arcadia aims to provide a “cocoon” for its owners, and this is reflected in feedback. “I love to have people on board during the day but in the evening and in the night I prefer to stay only with my family,” says one. “It is really my private island of relaxation to recharge the battery,” adds another.

Upstairs, the flybridge helm station makes for an exhilarating experience thanks to its height and unparalleled visibility around the bow. There is room for a plush dinette to port, facing a long cabinet containing an induction hob, fridge, dishwasher and other necessaries.

It is functional and cosy, but the wraparound windows that can be part lowered to let in air are what really make this space. And herein lies the key to the Sherpa’s second defining characteristic: a desire to connect with the elements around it.

The low bathing platform is one part of this, and the open spaces, which put the emphasis on fresh air, another. Arcadia has gone several steps further, though. Tank testing at the UK’s National Physical Laboratory has resulted in a highly efficient semi-displacement hull.

The twin Volvo Penta IPS 600 engines propel the boat at a comfortable cruising speed of 12 knots for a lean fuel consumption of 43 litres per hour, and a top speed of 22 knots. Benchmarking against competitors’ yachts of the same size suggests it is around a third more economical to sail, according to Ansalone. “Boats that do 30 knots,” he shrugs unapologetically, “it’s not our business.”

Panta Rei III has sophisticated Selmar black and grey water treatment systems, while nearly 2KW of solar panels built into the hardtop give her the ability to operate silently in an anchorage, with no need to fire up the generator.

“The solar panels are enough to run everything except for the air conditioning and the induction hob,” says Ansalone. “But if you want to stay inside with the air-con on, you might as well be in the office.”

Arcadia knows that the Sherpa’s workboat looks and extreme use of space are not for everyone, and it finds that owners are younger than average, and more experienced, with four or five yachts already behind them. “We launched something new on the market and it is not appropriate to compare it with traditional mainstream yachts,” says Pellegrino. “But those who really are looking at our products’ details will clearly understand each feature and the philosophy behind them.”

The owners so far seem to echo that. One says: “The line is so peculiar… at the beginning I looked at it with doubts, but after getting on board and imagining all I could do with it, I fell in love with it and so did my family.”

The success of the €1.75 million design has emboldened Arcadia to go bigger with the concept. The next in the Sherpa range has the working title “7x” — not, Pellegrino is at pains to point out, because it is a crossover boat, but simply because they haven’t yet decided exactly how long it will be.

This one is being designed with Milan-based Hot Lab, but will resemble its little sister. “I love this product!” Pellegrino exclaims. “It is the evolution of Sherpa — the layout will be similar, with an enormous aft deck of 65 square metres, but she’ll have a skylounge with a 35 square metre terrace.”

The way Pellegrino talks, it’s easy to forget that the young yard also has a range of bigger boats — its A Class, running from 26 metres up to 35 metres. These are slightly more traditional looking yachts, though with the same distinctive high, stepped bow as the Sherpa.

The yard is also building the first of its new A100+ models, but much of its creative energy is focused on a new 47 metre superyacht project called For.th.

“It will be a mix of the Sherpa and the A85,” says Ansalone. “She will have big aft decks for entertaining, but also

It’s a uniquely ambitious project for a yard that is celebrating only its 10th year in business. But then Arcadia is a special yard. After all, who launches a boatbuilding business from nothing with a radical 26 metre? It is clear that Arcadia is following a little travelled path, and so far it seems to be leading to bountiful waters.