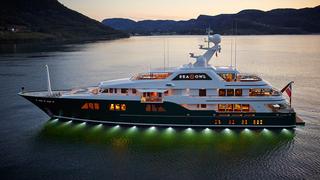 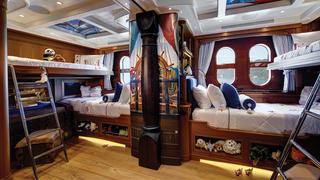 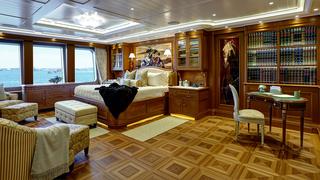 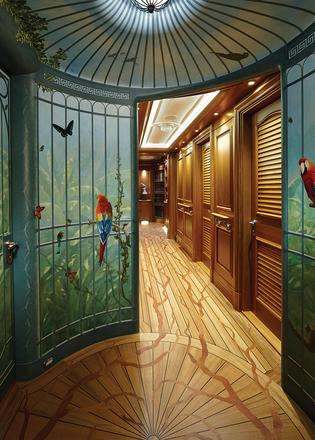 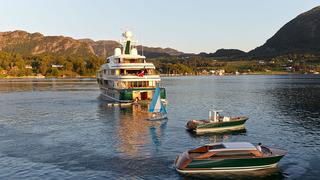 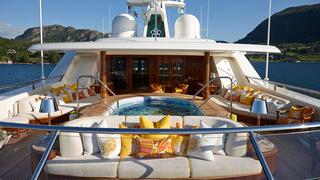 Personal and enchanting, 62 metre custom FeadshipSea Owl is a portal to a different world, where children learn as they play and adults can enjoy family time, work or relax miles away from land. Aside from her one-of-a-kind fantasy inspired interior, the yacht has a sophisticated custom-designed security system to allow her occupants to venture far afield in safety.

Sea Owl’s lead designer, Andrew Winch, grew up near Kensington Gardens in London, where a bronze statue of Peter Pan has bewitched generations of children since it mysteriously appeared in 1912.

Peter Pan is only one of several fairy tales and scholarly books that have inspired the décor, as the designers worked closely with family members to personalise each room and encourage the children to explore real and imaginary worlds.

On the bridge deck is a staff cabin decorated with frescos of fossilised seashells that a young Charles Darwin identified during his first trip on HMS Beagle. This doubles as a classroom, allowing the children to learn about Darwin as the yacht explores the Galápagos Islands.

On the lower deck is a delightful pirate-themed room; next to this is one of the daughters’ cabins with scenes from Alice in Wonderland. On the sun deck, a toothy shark grins on the walls of the freshwater spa pool.

Three decks below, a book painted on the ceiling appears to be defying the laws of gravity to fly away from the library wall – it’s Newton’s Philosophiae Naturalis Principia Mathematica, naturally. While the décor is playful, it is never kitsch, reaching a level of artistry even grown-ups can appreciate.

The results surprised the Sea Owl’s owner. "Although I was tangentially involved in the design of the boat and kept abreast of how the build was progressing, I was truly astonished by the level of craftsmanship and tastefulness that distinguishes every nook and cranny," he said, adding that this success "is largely due to the close collaboration between the design team at Winch Design and my wife and daughter who are endowed with both exceptionally good taste and exceptionally strong opinions."

While children were the inspiration for this project, making this dream happen was anything but child’s play. Winch, who has designed seven Feadships to date, including the 99 metre Madame Gu, says Sea Owl was one of the most complex projects he has ever handled.

Part of the complexity resides in the number of details in this high-volume explorer. There are those you can see, such as a silk and wool carpet hand-knotted in Nepal, the Dale Chihuly chandelier made of Venetian glass, or the basin carved like a gem from a single block of crystal.

And there are the ones you don’t – security cameras with a 360-degree view at the waterline, fingerprint-recognition keypads and a sophisticated entertainment system.

A detailed description of this interior would fill a book, but a few details are enough to illustrate the yacht’s spirit. The central stairway features a mural, carved from Peruvian mahogany, of a magical tree rising four decks high in one continuous design, the roots grounded in the lower deck’s sole and branches reaching the sun deck.

The guest lift is much less noticeable from the outside but on its inside walls are trompe l’oeil murals depicting, among others, a garden scene and the family dog awaiting a treat.

The owner, gifted with a mathematical mind, has an office where he can be introspective behind closed doors but find inspiration in the oceanscape unfolding in front of him. This room is part of the owner’s private suite.

Its centrepiece is an exquisite copy of an 18th Century French desk by French furniture designer Serge Mirochnikoff, who created several other special pieces on board. On the ceiling is one of many frescoes commissioned by Winch Design, this one a depiction of a world map circa 1800. Such details bring character to a yacht that the owner wanted to serve as an ideal holiday home for his large family.

Soon after starting construction of their previous Sea Owl (now Shadowl), a 43m Burger of which Winch Design designed the interior, the owners realised the need for a bigger boat to accommodate their growing family and, in 2007, began discussing the new yacht with Winch Design and Anthony Sands of Edge Yachts, their representative.

The Burger’s green hull and white superstructure colour scheme was shared with the new yacht, which is painted in the Awlgrip shades Jade Mist and Oyster White.

A bid to build the new Sea Owl went out to seven shipyards, and a contract was signed with Feadship in 2008. Construction began two years later on what may be, at close to 1,500 gross tonnes, the biggest 62 metre yet built.

"We knew from the very start that Sea Owl was going to be an extraordinary vessel, but also one that would pose challenges in her design and construction due to the high aesthetic standards the owners were trying to achieve, coupled with the yacht’s cutting-edge technological sophistication," Sands said.

"The experienced Sea Owl team from Winch Design knew that the yacht’s exterior and planning was the answer. It’s to the entire team’s credit that we achieved on all counts, including construction deadlines and budget."

For the new Sea Owl, her owners wanted big spaces and wide-open vistas but within the length of 62 metres, which while generous by other measures, proved challenging when it came to accommodating all the family’s wishes.

This puzzle was left to Winch Design to resolve. The experienced team designed a yacht that is exceptionally beamy (12.2 metres overall) with a very large superstructure.

The sun deck is partially enclosed to create a light-filled dining saloon with an adjacent pantry that occupies a good part of the interior on this deck. Winch and his team, which gave the yacht elegant and classic lines, used the wide beam to maximum effect.

As the owners value privacy and security, access points are limited to what’s necessary and the accommodation stretches across the full beam where convenient. On the bridge deck, a light-filled Caribbean-inspired upper saloon stretches between windows, while forward, two balconies unfold to offer up panoramic views to guests.

Throughout, Winch pursued an organic design. "Symmetry makes the environment feel controlled," he said, which was far from the desired effect. The layout is very different from the rigid patterns found on many yachts. While there is practicality in the way the decks are organised (the layout is being kept private at the owner’s request), few linear patterns are on board.

The main dining table, set in front of a Venetian fresco, for instance, is off centre. Glancing forward from the saloon, you get an open view up to a library wall that conceals the owners’ walk-in wardrobe.

As amazing as what you can see, is what you do not see. It is not obvious that the custom-made furnishings, most built in-house by the Feadship craftsmen, are all sea-fastened for safety.

The custom rosewood self-playing Steinway baby grand piano in the main saloon is not only affixed to the deck sole, but also interfaces with the music library and can play any piece of music stored in the Kaleidescape audio visual system.

The yacht features WiFi throughout for iPad use, while most tables, including those on the outer decks, have hidden power sources to recharge tablets or laptops.

Security consultants worked closely with the shipyard up to the last few days before delivery, and while the effective and discreet security system does not distract from the magic of the décor, accommodating it added a layer of complexity – one that even the experienced Feadship shipyard acknowledges.

"It added weight on the boat, which we had to account for and balance with the class requirements," said Koos Zitman, sales director at Feadship. "You can only assign the space once."

Asked what design features were borrowed from other Feadship projects – perhaps the large windows, the saloon door that recedes to fully open the upper saloon to the aft deck or the twin tender bays forward – Zitman said the project was entirely owner driven. Even the large radar mast was done at the owner’s request.

Conscious of their surroundings and the pristine areas they want to discover, the owners also opted for a dynamic positioning system, which allows the yacht to stay in place without deploying anchors.

In early July 2013, the yacht and her crew of 18 set off on the first of her extended journeys to the Norwegian fjords after a handover ceremony in front of Amsterdam’s National Maritime Museum. Adventure is built right into this stately yacht’s design.