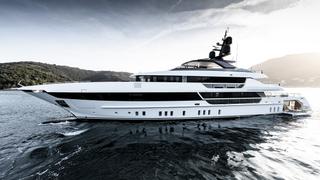 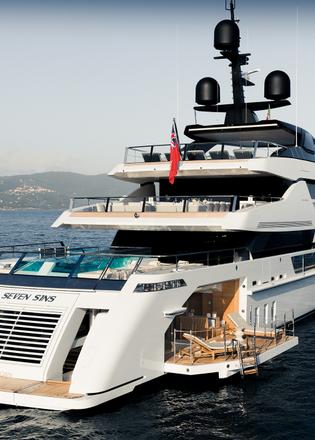 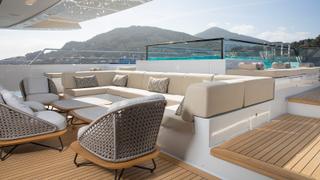 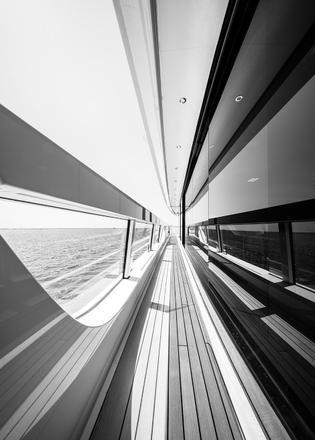 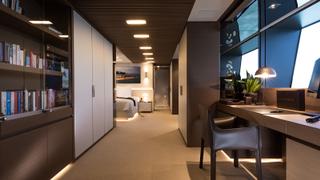 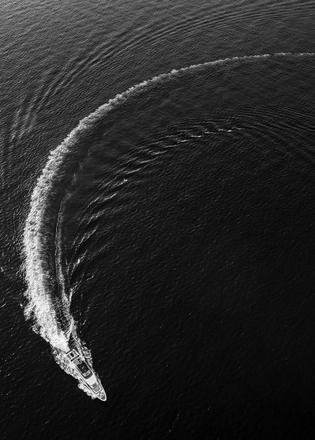 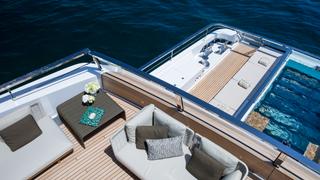 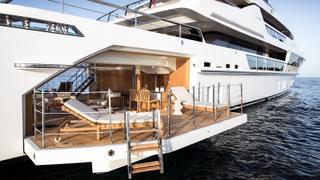 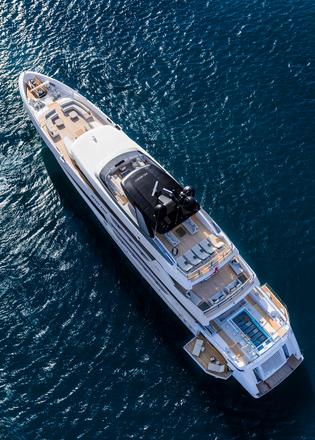 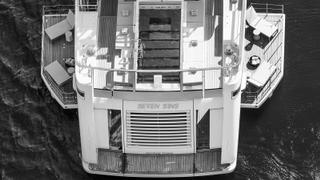 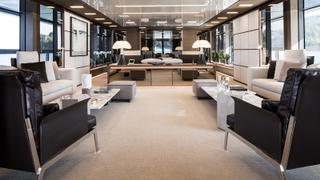 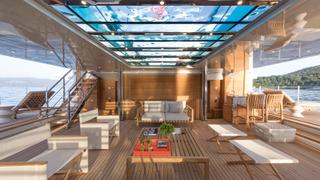 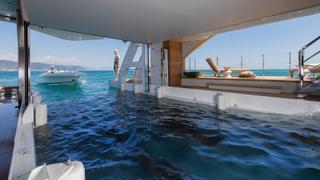 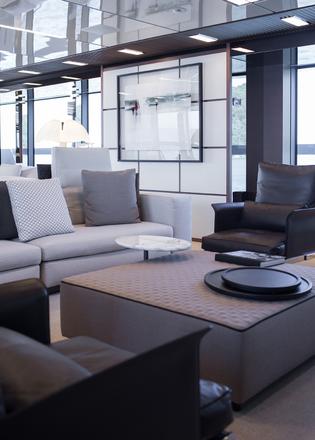 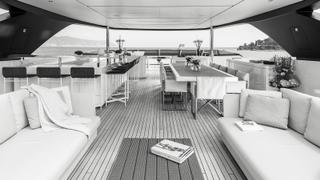 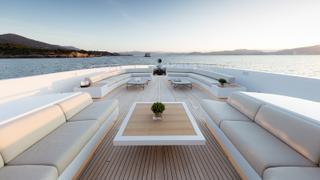 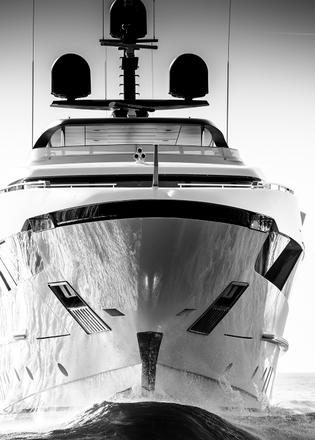 With a few devilishly clever tweaks adding to her virtues, Sanlorenzo’s new semi-custom 52 metreSeven Sins is a unique temptation in the charter market, writes Caroline White

“It’s very simple, I cannot afford such a boat,” says Hugo Verlinden of the wallet-punishing world of superyacht ownership. The thing is, he does own such a boat, and not a paltry one: Sanlorenzo’s new semi-custom flagship, 52 metre Seven Sins.

He makes it work through pragmatism and experience. “Me and my friends we are four joint owners,” he says. “We like to enjoy the boat, but first of all we want to reduce the cost. That’s target number one. If the charter enquiries stop for a season we fill in the time. We sit together, drink coffee or champagne and say, ‘Who is going first?’ so the boat is always busy.”

It was the same with Verlinden’s previous boat, also called Seven Sins, a spectacularly popular charter, but his yacht ownership goes back further than that. In 1978 he took delivery of an 18.5 metre Sanlorenzo, then in 1988 he ordered the 27 metre HeesenBacino (now Lady Arlene) which in 1998 he lengthened to 32 metres, followed in 2005 by the previous Seven Sins, also a Heesen, which he lengthened from 41 to 43 metres in 2015. With 40 years’ experience and a reputation as a successful charter boat owner, he returned to Sanlorenzo.

The new chapter with the La Spezia-based yard began for Verlinden in January 2016 at the Düsseldorf Boat Show. It was early evening, the organisers were starting to turn out the lights and Verlinden stopped by the Sanlorenzo stand for a drink on his way out. A boat model there caught his eye.

“It was not that much about the boat or the profile, it was about the concept of the architect, Mauro Micheli.” Essentially that concept was a 52 metre with features you’d expect of a 62 metre. It was a friend and regular charterer of Verlinden’s previous boat who sealed the deal. “He said to me, ‘Mr Verlinden, this boat, in her size, is unique.’ He was right.”

It made sense in the short as well as long term, since the project was already at an advanced stage, built for an owner who had pulled out. The flip side of that time-saving was that the scope of customisations would be limited. There were tweaks Verlinden would have made to the GA with an eye to charter — a lift, for example, would have expanded the pool of potential charterers.

But there were plenty of elements that he was able to adapt for “intense charter”, from audiovisual, for example upgrading to OLED televisions, plus installing powerful UniFi AP AC Pro WiFi and VSAT antennae, to more major edits such as an extra steering position on the superyacht sundeck and upgrading Seven Sins’ fuel tanks to 68,000 litres from the standard 55,000.

There were also plenty of unchangeable elements that Verlinden was happy with, particularly the profile — Seven Sins is a black windowed beauty — and the combination of huge main and upper deck windows with glass side deck bulwarks that allow unimpeded views of the seascape.

“The relationship between exterior and interior through large glass panels is nowadays a guiding factor when designing and developing our new yachts,” says Antonio Santella, vice-president of sales and marketing at Sanlorenzo’s superyacht division.

The interior décor, also by Mauro Micheli’s studio Officina Italiana Design, is ideal for charter. Santella describes it as “a good reflection of the modern aspect of the exterior lines, sober and elegant without unnecessary excesses”. The palette throughout Seven Sins consists of white, beige, taupe and browns; a scheme that allows the atmosphere to fluctuate between cosy and breezy.

And then there are those big boat features. Chief among these is a float-in tender garage that transforms into Seven Sins’ beach club. Water is pumped into the tender bay and once full the transom is opened and the tender slips out. Terraces open to port and starboard, while a teak-soled section lowers from overhead, creating a large superyacht beach club with light filtering down from the glass bottom of the pool above.

“It’s a lot of technical aspects in a reduced area,” says project manager Luca Ghirlanda, reeling off the challenges that had architects poring over plans and gangs of engineers crawling over the space. “The docking tender garage, the opening platform, the opening transom door, the swimming pool with 12 tonnes of water on top of glass… and the up-and-down floor level.”

It’s not the only way the yard has been clever. “Seven Sins is 499GT because some areas are considered external areas and not included in the GT calculation. Including those areas in the calculation would make the gross tonnage rise [to] over 600GT,” says Santella.

Forward of this opening stern area is a superyacht gym flanked by a serious wellness area of the sort that is common on far larger yachts, with a hammam, steam room, shower and head ranged athwartships. These are unusual luxuries for charterers in the sub-60 metre market.

One level above, the aft deck swimming pool has been enhanced to spectacular status, with a glass panel aft as well as below and sophisticated lighting to show it off at night. “There is also a counter-current, so it simulates resistance as for a runner. And there is also a Jacuzzi part,” says Ghirlanda. This is a great space for daytime lounging, with generous sunpads flanking the water and shaded seating forward ranged around a coffee table.

But the sundeck is likely to be the most popular al fresco spot on board Seven Sins. With loose furniture from Paola Lenti, it packs in the facilities — there’s a rank of sunloungers aft, comfortable seating around coffee tables, a dining table for 12, and a glamorous bar clad in silver-flecked granite that shimmers in the sun. Making the most of the foredeck makes a yacht feel larger — here coffee tables and sofas provide another exterior space for guests.

The main saloon is enormously light thanks to those huge windows and glass bulwarks, with an aft entrance lobby and bar leading to two distinct seating areas: a more formal one with pale marble coffee tables, then, separated by low mirrored cabinetry, a relaxed one in front of a cinema screen — a position more traditionally occupied by the dining saloon.

“The screen is inside a mirror, which when you switch on you see the TV, and when you switch off you see the mirror,” says Sandro Chiavetta, style director at Sanlorenzo. This reflective surface, as well as the high gloss white overheads, bounce light from the expansive windows and make this an extremely airy-feeling space.

Seven Sins’ interior dining space is in the upper saloon, along with more loungy seating — perfect for aperitifs before dinner. It’s a sensible arrangement of living spaces that acknowledges that most main deck dining saloons are a waste of prime interior real estate, underused in favour of al fresco tables, whereas a cinema is a cosy space that makes sense deep inside the yacht. Forward of the main saloon is a white Carrara marble staircase with floating treads to give the space a light, open feeling.

Forward again is the owner’s cabin, where Verlinden specified extra wardrobe space. A good sized office opens on to the cabin, which has a sofa to starboard and vanity to port. The en suite — with a large bath — runs athwartships forward of the bed. The tones are brown and studious in the superyacht office, alongside a recessed bookcase, but then white for the overheads, walls and much furniture in the cabin itself, making this space feel as if it could be a deck higher up.

Decent crew areas and efficient routing, essential for successful charter operation, have been built in. The lower deck mess and cabins connect to the galley on the deck above an adjacent pantry, with a second pantry positioned to serve the upper deck dining table. A dumb waiter connects these two service areas with the sundeck.

There’s also a tank deck technical tunnel, accessible from the crew mess, which leads aft from the forward bow thruster compartment to Seven Sins’ engine room, through the cold stores area and the laundry. It is completely invisible to guests and also allows the engineer great visibility and access to the majority of plumbing, tanks and main machinery.

“All the valves (for plumbing in guest cabins) and basically all systems and installations are in this tunnel, so you do not have to dismantle the floor in the guest area, in the bath,” says Ghirlanda.

As a whole, Seven Sins is a clever package well-suited to charter — and fully booked for her first summer season. Three further 52Steel models are in build and sold, two due next year and one in 2019. Verlinden may not be able to afford such a boat, but Seven Sins seems to have been a wise investment for both him and Sanlorenzo.