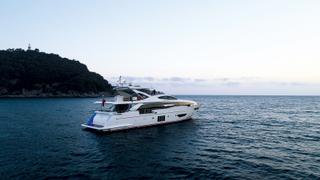 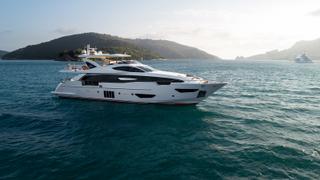 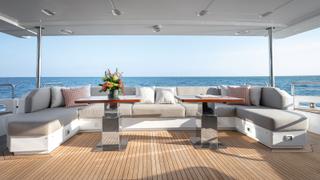 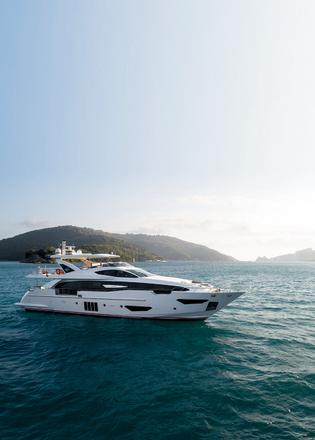 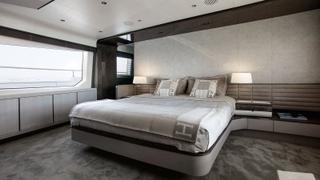 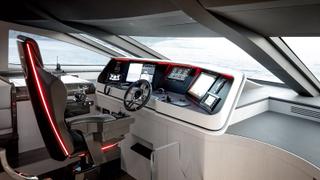 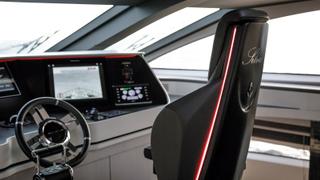 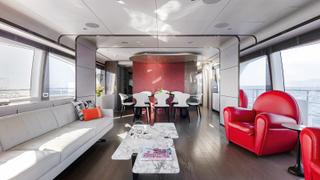 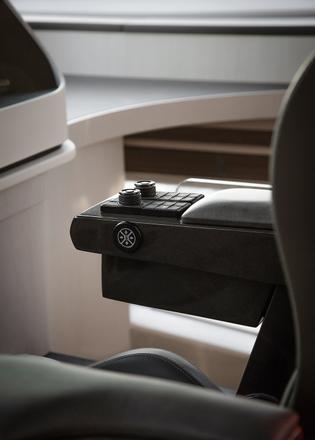 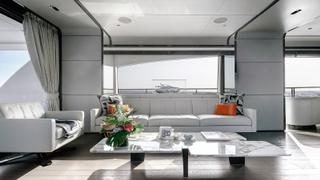 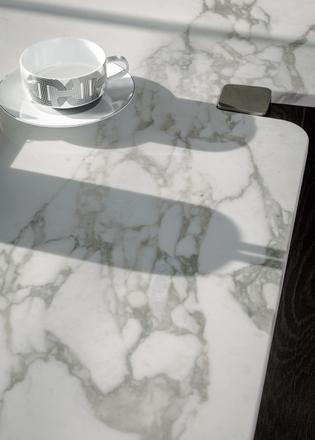 An amateur pilot brought his experience to bear on the interior of his Azimut Grande 30 Metri Grand Tourer – and the result lands him firmly in his comfort zone...

In the car world, the term Grand Tourer (or Gran Turismo) refers to souped-up cars built for long-distance travel – powerful, sensuous and oh-so-comfortable. GTs are cars made for grown-ups, the ultimate baby boomer’s vehicle. The label perfectly fits the first Azimut Grande 30 Metri Grand Tourer, Silvia, which sports a Stefano Righini exterior, generous in its dimensions, and is fitted with an eye-popping bridge inspired by a pilot.

One client’s vision for his first motor yacht led to the design. The new boat is hull 28 of a series known as the Azimut Grande 95 RPH introduced in 2014, but recently reborn as the Azimut Grande 30 Metri with a few enhancements and more powerful engines. Silvia, the GT, is a customised version. This yacht at first glance looks very much like the 95RHP – until you take a look inside.

The owner of Silvia is a lawyer by profession, a sailor by vocation and an amateur pilot who enjoys flying PC-7s (a Swiss-made turboprop aircraft used for acrobatics). He worked with Azimut, and particularly general manager Ugo Garassino, to develop this new version.

Although he had very specific ideas for his first motor yacht, this client did not want to start from scratch. Drawing a parallel with the car world, he recalls a time when car manufacturers only provided a frame, and the car’s body and interior were left up to the creativity of the owners and their chosen designers. “That was an era when the most beautiful cars were developed,” he says. “This happens today in yachting, but it only happens for full custom yachts. It means custom body, custom hull, everything is customised.

The Grand Tourer lives up to the label of GT, used in the car world to designate luxury cars with power and ample dimensions for long- distance driving

Sometimes it works, sometimes it doesn’t. We did not want to develop our first motor yacht from zero; we wanted to use something that was already tested and proven successful. And the hull of this boat is fantastic.” This hull is fitted with twin MTU 16V 2000 M96 engines and a lot of horses, which means it planes at 16 knots and gallops at 27.5 knots, which is handy when it’s time to seek shelter from inclement weather.

Azimut is quite able to adapt its designs, particularly when it comes to its larger yachts. The builder has worked closely with its dealers to develop features friendly to specific markets and has produced, for instance, US- and Asia-specific versions of the Azimut 95RPH.

Garassino found his client’s ideas interesting. “This boat will be appealing for people who want to live on the boat,” he says. “The general trend for people is to have as many cabins as possible. In this case, we did exactly the opposite.” Fewer cabins mean a lot more space to stretch out. The result is a couple’s dream and, says the happy owner, “from our point of view very comfortable”.

“We worked hard with the shipyard on improving the comfort of this boat and bringing it to another level,” he says. “The most important portion of luxury is the space, so the first thing we did is empty the boat and recreate the original large space, especially in the living room.” For the design and finishes of these spaces, the owners worked directly with Azimut’s in-house team and furniture maker Poltrona Frau.

We’ve been chatting in the shaded comfort of the flybridge and now step into the chilled ambiance of the saloon where the owner draws attention to two red leather armchairs in front of the starboard side’s floor-to-ceiling windows. “These are from 1930. Nineteen THIRTY, it’s amazing,” he says. The Vanity Fair lounge chair, an original design by Renzo Frau, indeed looks incredibly current – and very comfortable.

The saloon is otherwise pretty open with minimal interruption in flow to the dining area in the far half of the saloon, where a splash of colour on the central bulkhead echoes the chair’s red leather and draws the eye past a dining table set for eight people. Aside from these spots of bright colour, the modern décor is a pleasant blend of whites and greys over a dark-stained parquet flooring. “We left a lot of open space but retained the storage space,” the owner says.

At the front of the boat, via the starboard side corridor, we reach the owner’s area and the heart of the boat. The standard layout of the 30 Metri includes four guest cabins and a very comfortable master cabin – around 34 square metres – with a king size bed at its centre. This owner had no use for the extra cabins. “Who needs a VIP cabin to hang out dresses that don’t fit in the master room’s closet?” he says. Silvia does have two very nice guest cabins with en suites but the owners enjoy the lion share of the accommodation space.

“On this boat the owner’s cabin is on three different levels, and there are some amenities that you can find only on much larger boats – those that are 40 or 50 metres long. The idea was to spend time in a comfortable way as we sail all round the coast of the Mediterranean.”

The owner’s areacomprises the generous full-beam cabin on the main deck, a symphony of relaxing earth tones and soft fabrics lit by the sunlight streaming through large windows, and an en suite with twin basins and a big steam shower, sunken forward of the bedroom. The owner did a few tweaks here, including adding a seat to the chromotherapy-equipped shower, to “sit and think”. This, however, is all pretty much like the original design. What is really different is a third area on the lower deck. “We destroyed what originally was a small wardrobe and we went down, and this is our new design,” he says.

The adjustable seat was de-signed for comfort during long navigation, providing physical ease in an aesthetically pleasing package

At the bottom of the stairs, it takes a few seconds for my eyes to adjust to the dimmer light. The third component of the owner’s area is a combination of television lounge, work space, dressing room, and beauty and wellness area with a tub for long, relaxing soaks.

A form-fitting lounger, sure to induce drowsiness, sits neatly alongside a bulkhead with its headrest near the porthole and facing a television screen controlled by iPad. Opposite, a large closet is fitted with multiple shelves, a perfect place to stash a collection of accessories. The builder had to move windows and the long, narrow tub had to be installed before the two halves of the boat (top and bottom) were reunited.

“We did not have to change the mould, but we had to change all interior partitions, and all the plumbing is different,” Garassino says. Building a GT version cannot be a spur of the moment decision. “We need to plan ahead,” he says. And it comes at a premium, due in part to the extras that went into the reworked pilothouse.

This was the owner’s special project and he is especially proud of the command post. Carbon fibre frames a glass helm and red lights glow from the personalised helm seat.

“The helm room was changed dramatically because I introduced my experience as a pilot to have something that is more ergonomic and practical to use than the classic flat panel,” he says. This three-panel dash is arranged in a semi wrap for optimal access and visibility. An aircraft pilot, however, will find no Garmin here, but instead a complete navigation package by Raymarine.

All functions are also available at the captain’s fingertips on the armrests of the chair, which replaces the standard-issue leaning post. “That was a real miracle from Azimut design. We redesigned the stairs because the original design did not allow us to install a seat – you only had a bar, which wasn’t comfortable,” he adds.

The owner very much enjoyed his collaboration with Azimut. He is already thinking ahead to a new project, with Azimut of course, that would put him closer to the water, with a “terrace on the sea” and perhaps with hybrid propulsion.

Silvia starts a tour of the Med this summer and is sure to attract a bit more attention. To call this particular model a success and make the investment worthwhile, all Azimut needs is to sell four or more just like her. She has a ready market among baby boomers brimming with energy, for whom the Grand Tourer, priced at €8 million to €9 million, with its style, comfort and punch, could be the right boat.

One: Inside the first-born of ISA Yachts’ new Extra range

Skyline: The 27m Horizon yacht with plenty of added extras