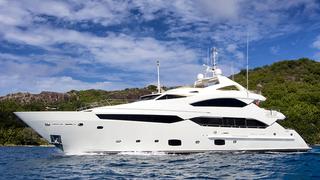 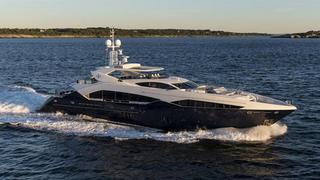 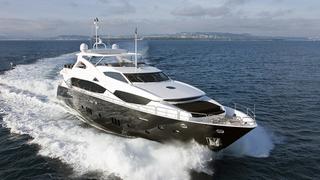 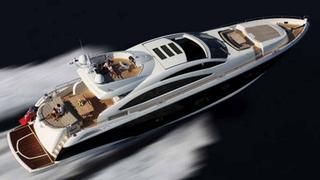 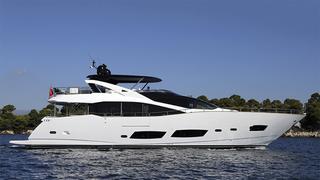 Sleek and sporty, motor yachts from the British yard Sunseeker International are very popular with savvy owners. Indeed, a wealthy Chinese businessman who purchased one liked the yacht so much, he went on to buy the yard. Here we present five examples of Sunseeker luxury yachts currently for sale.

Delivered in 2013, the 40m Princess K is currently the only Sunseeker 40 metre offered for sale worldwide.

She offers a huge amount of volume of 338 GRT for a yacht this size. With three internal decks and a sun deck, she ensures that guests on board are provided with an abundance of sumptuous relaxation and entertaining areas. The elegant and spacious main deck saloon has the optional extra of stylish bulwark balconies with sliding doors fitted to both port and starboard sides.

Accommodation for 12 guests includes a vast main deck master suite and a further four guest staterooms are located on the lower deck, including two twin berths that are convertible to doubles and each with a Pullman berth.

The bridge deck offers a great venue for entertaining with a skylounge, cocktail bar and al fresco dining while the sun deck has a stylish glass-panelled Jacuzzi and adjacent sunpads for soaking up the sun. More dining is also possible on this sun deck with two tables able to seat up to 16 guests with plenty of shade and a full service bar.

Lying in the United Arab Emirates, Princess K is asking £12,950,000 through Dbeere Yachts.

Built under the supervision of an experienced owner and captain, Never Say Never is a Sunseeker Predator 40m launched in 2011. She accommodates 12 guests in a master suite on the main deck, and two double staterooms and two twin cabins with Pullman berths on the lower deck. She also features a beautifully finished Ken Freivokh designed interior, has never been chartered, and is in immaculate condition. Twin 3,460hp MTU engines (with an extended warranty) take her to speeds of 26 knots.

Designed with naval architecture by Don Shead, the 34m Black and White was launched in August 2010. She is a very highly customized version of the popular Sunseeker 34 Metre Yacht series, with a specification that surpasses many of her predecessors. The interior features fully custom and exclusive Fendi hard furnishings, opulent Frette linen and design accessories and a Bang & Olufsen lifestyle surround-sound system throughout.

Black and White also features a large flybridge complete with a centrepiece Jacuzzi, as well as a large bar for al fresco entertaining. Twin 2,434hp MTU engines give her a cruising speed of 20 knots.

Lying in the South of France, Black and White is asking 6 million through Sea-Alliance.

A Sunseeker Predator 92S, the 28.2m Baltazar was delivered in 2009. She is MCA compliant and has the very latest audio visual systems throughout. Twin 2,400hp MTU engines deliver a cruising speed of 22 knots, topping out at 37 knots and she has a range of 650 nautical miles at 15 knots. Accommodation is for eight guests in four staterooms including a master suite with walk-in wardrobe and en suite bathroom, a VIP stateroom forward with en suite facilities and two twin cabins, which can be converted to doubles. Four crew share two cabins with two berths in each one. Security equipment includes a CCTV system with three cameras and a remote controlled spotlight on the bow.

The expansive main saloon has a 50 inch B&O plasma drop-down television with DVD/CD systems and surround sound. The master and VIP suites are fitted with 40 inch B&O LCD televisions and surround sound audio while the two guest cabins have 19 inch Samsung LCD televisions and full entertainment systems. Other features on Baltazar include a teak laid hydraulic swimming platform and a retractable awning over the aft guest area.

The 28 metre Gelato was built to RINA class and was delivered in April 2013, conceived to offer all round al fresco entertainment. She is a highly specified example of the popular Sunseeker 82 model and the abundant specification includes a Trac Star digital fin stabilizer system, flybridge cockpit teak decking and upgraded generators with super silent sound shields. The addition of the flybridge provides a second helm position and an excellent vantage point for those on board to take in the vistas ahead.

Methodically maintained by her full time crew as a private yacht, she is spacious, elegant and practical The interior is extremely attractive, benefitting from exquisite craftsmanship and cutting-edge design. Accommodation is for eight guests in four sophisticated staterooms. Equipped with zero speed stabilizers, her 1,950 MTU engines power her to speeds of up to 29 knots.