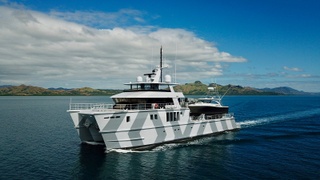 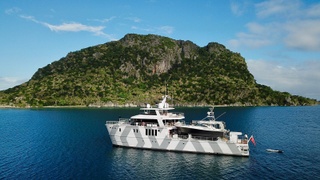 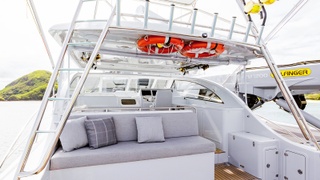 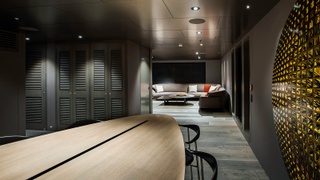 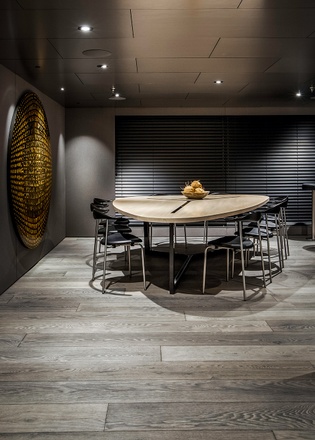 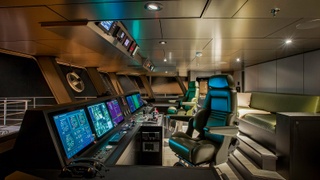 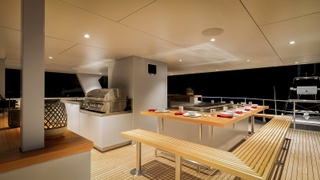 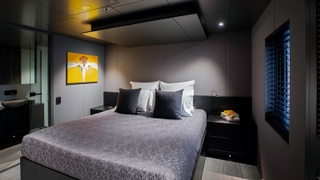 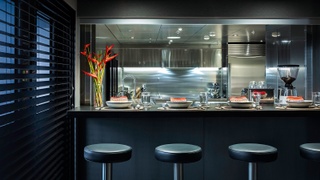 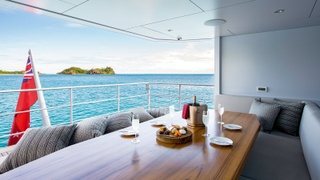 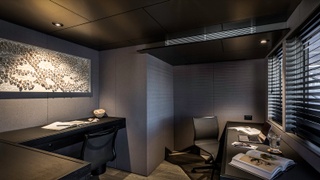 The Beast: On Board the 39 Metre Explorer Catamaran

With a camouflage paint job, commercial looks and a 19-tonne fishing boat on the back, The Beast is, by the admission of her owner Sir Michael Hill, “a little bit different”. Ellie Brade reports.

Driving over the Harbour Bridge in Auckland, New Zealand, a cluster of superyachts in the nearby marina catch the eye. But it is not so easy to make out The Beast. With her military-style camouflage paint job, this 39.2-metre, 493GT catamaran may be one of 2019’s most distinctive launches – but she is harder to spot at a distance.

“I knew if I ever built another yacht, I’d go for something a bit different,” says Kiwi jewellery entrepreneur Sir Michael Hill, who until recently owned 34-metre Alloy YachtsVvS1 (now Akiko). Andy Grocott, Hill’s long-time captain, chimes in: “We’d discussed a new build for quite a few years, but VvS1 was a great boat and each time we looked into building or purchasing a replacement it came down to what size tender we could practically fit on deck.”

And then came a 13-metre composite game fishing boat – now dubbed the “Baby Beast” – which Hill had begun building as a chase boat for VvS1. When the opportunity to sell VvS1 unexpectedly arose, Hill and his wife, Lady Christine, committed to a new build that could take their new fishing boat with it.

“We’d started to build the Baby Beast and the next challenge to consider was how we were going to get the game boat to the areas Michael and Christine like to go – and that was really the impetus to build a vessel like The Beast,” Grocott says. “To not be restricted by transport routes or the storing of cradles, but to be able to take it anywhere we want to go. Finding a yacht to carry this on was not going to be easy.”

A 34-metre Australian offshore survey catamaran named Offshore Guardian, designed by naval architects LOMOcean Design, had caught Hill’s eye. The catamaran’s design ticked the boxes, and Hill hatched a plan to build a yacht that drew influences from the commercial world but with a high-end interior. He chose LOMOcean to make it a reality.

A proud New Zealander, Hill was keen to support the local marine industry. The more surprising part of that decision was that he opted to work with Profab Central Engineering, a landlocked yard that specialises in commercial projects, rather than a traditional superyacht builder, but the yard’s commercial expertise and an attractive price point swung it. The yacht was built in two parts at Profab’s yard in Palmerston North, and was then trucked 40 kilometres to the coastal city of Foxton, where it was assembled and launched. The interior, meanwhile, was completed at a third location, in Whangarei, before being dropped in.

Although Offshore Guardian was the inspiration, The Beast is a major evolution from the original design. “If you eyeballed them both from a distance, forgetting about the paint job, they look pretty similar, but up close there’s a lot of difference,” says Craig Loomes, director of LOMOcean. “We started from the same base, but then it got a bit longer, then a bit wider, and we ended up at near enough 40 metres, but the beauty of a custom design is that the client/owners do have the flexibility to build their dream.”

The LOMOcean team took time to understand what worked and what didn’t with VvS1 and translated this to the new build. “We still loved the look of VvS1 so there are some similarities on The Beast,” says Hill. “The Beast is much wider than VvS1, which gives a huge amount of space, and it’s such a stable platform. We love it.”

The resulting boat is a vast catamaran, with explorer influences in its design and a 15-metre industrial-style aft deck that is now home to the Baby Beast, various watercraft including an amphibious vessel, and two heavy-duty cranes. “We don’t like sitting around, and The Beast is absolutely designed for adventure,” says Hill, a keen fisherman. “We’ve packed her with all kinds of water equipment and everything for fishing, from freezer rooms to live bait tanks. Even though the boat is only 39.2 metres, the 12-metre beam is huge, so there’s so much space.”

Commercial crossovers include a dynamic positioning system, not commonly seen on pleasure boats of this size, which will prove a real boon when Hill wants to enjoy some deep-water bottom fishing. The catamaran hull has impressed both captain and owner with its efficient performance and lower running costs. “It’s a very different motion to VvS1, but the stability is amazing,” says Grocott. A range of 5,000 nautical miles when cruising can take her easily from New Zealand to Panama, “though we could probably achieve 7,000 nautical miles if we nursed it”.

Building a yacht around the heavy fishing boat was no easy task. “A lot of work had to go into the logistics of carrying the Baby Beast on board because taking [19] tonnes on and off the aft end of one side of the boat has an obvious effect on the trim,” says Andre Moltschaniwskyj, director of LOMOcean Design. “That meant things like ballast systems were really important to get right.”

Striking the right balance between a commercial and luxury vessel also proved challenging at times. “Initially the idea was to have a commercial vessel exterior and a luxury vessel interior,” says Moltschaniwskyj, “but of course we quickly realised the outdoor spaces are an extension of the interior and needed to be of a particular standard that far exceeded the commercial benchmark.” Outdoor areas include a sheltered dining space on the upper deck, a large sundeck with a bar and teppanyaki grill – a feature that carried over from VvS1 – and a sheltered retreat on the aft deck.

The Beast’s interior is a relaxed haven that was created by the Hill family. “The style of the interior is a progression of all our previous boats and house designs,” says Hill, “and was designed by Christine, myself and Monika, our daughter-in-law, who has an excellent eye for colour, detail and finishes and was a great sounding board throughout the whole design process. We were not influenced by what are generally described as superyachts, and The Beast is more an exploration vessel – the colours are muted and tonally relaxed inside and out, while the exterior ‘camouflage’ stripes give the appearance of a military vessel.”

Functionality influenced every aspect of the design, and since taking delivery Hill has been delighted with how the dream has translated to real life. “We love the fact there are several ways around the boat and different dining areas on different levels,” he says. “Even with a full house there are places for solitude.”

A dark colour scheme with grey fabric and oak-style veneer panelling on the walls and floor is offset by colourful pieces of artwork, many by Lady Christine. “We’re not overcomplicated people, but the interior is beautiful and all the colours blend together nicely,” says Hill.

A favourite spot is a work area on the upper deck, with a painting station for Lady Christine and a desk for Sir Michael. A triangular table dictated the design of the open-plan dining/galley area and adjacent saloon. “That whole area is designed around that one piece, which makes that corner of the boat a real centrepiece and connects the dining and lounge spaces nicely,” says Moltschaniwskyj. The end result is an inviting dining area that can be closed off from the open galley as needed, leading into a relaxed lounge space. “The owners enjoy interacting with the chef and the galley, so that open layout was important to them,” says Grocott.

LOMOcean worked cleverly within the constraints imposed by two hulls. While there were some limitations owing to hull width below the main deck, spaces do not feel overly small. The master suite, one of five cabins, is on the main deck, while grandchildren have a dedicated bunk room on the lower deck. Throughout the vessel a defining feature is an abundance of storage, including cavernous underfloor spaces that stretch the depth of the hulls.

Following sea trials, The Beast headed for the Pacific islands, where the Hills have been putting her to good use. She will be listed for charter by 37 South and based out of New Zealand and the South Pacific. “Her extended range is important in this part of the world with so many remote and secluded destinations,” says Fleur Tomlinson, charter broker at 37 South. It means there is really no limit as to where she can cruise.” With the America’s Cup on the horizon, she will also be available for charter for the 2021 racing action.

Whenever you think the superyacht industry has done it all, along comes something to surprise you. Hill has owned 11 boats and built six, and his experience is evident in The Beast, a showcase for what an unrestrained vision can deliver.

All photography by Andy Grocott and Aaron March