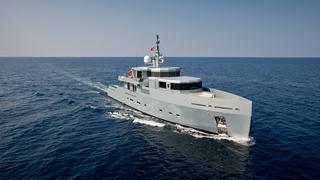 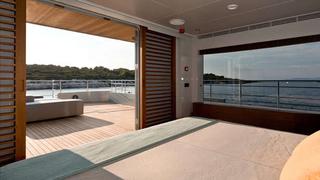 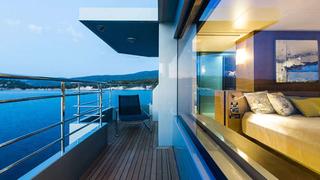 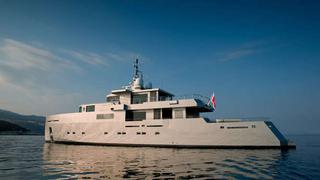 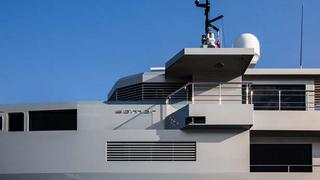 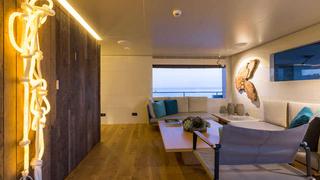 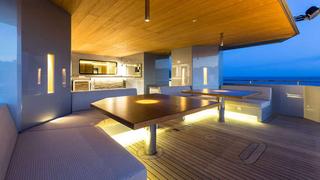 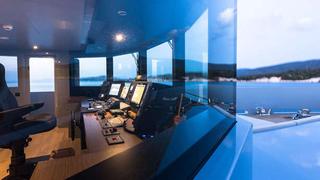 So’mar‘s intriguing looks – she has an unmistakably military air – are the result of an ethos that runs through every aspect of the superyacht’s creation. “I’m a big fan of things designed with function,” says Riza Tansu, yacht designer and founder of Turkish builder Tansu Yachts, which launched So’mar this year. “Form following function is our motto and everything on that boat has a meaning. What you need is there, but there is no ornamentation and no styling. When you do this you end up with something quite military because the military does the same thing.”

The master suite at the top of So’mar is a feature more commonly seen in 60 or 70 metre superyachts. The cabin has spectacular views through huge windows, while aft, through louvred doors, is a broad private deck with reconfigurable sofa seating. The side-decks are broad with fixed balconies at their forward ends. “These come out from the structure, the very design of the boat,” Tansu says. “If you have nice weather, this is a most beautiful space.”

The creation of So’mar was sparked in 2011 in Corsica, where her owner saw Tansu’s own luxury yacht, 36.4 metre Nomade, later sold in September 2011, which embodies the same masculine style. In terms of lifestyle, the owner and the builder were in accord: “I believe in small living spaces inside and large living spaces outside,” Tansu says.

For superyacht So’mar‘s build material, the owner had a choice. “We have two faculties, steel and aluminium and wood composite,” says Tansu. “The owners have friends who own a very experienced and well-known yacht builder and asked their opinion. They said if you are going to use the boat, definitely go with wood composite. But if you want to sell the superyacht quickly, then do it in steel and aluminium.” They went for the wood composite of iroko, sapele and acajou. “It’s more cost effective,” says Tansu. “Less fuel. Smaller engines. Better sound and vibration control.”

Dr Mehmet Asatekin, who taught Tansu industrial design at Middle East Technical University in Ankara, describes So’mar’s styling as embodying the principles of “power”, “brutal expression of force” and “visual order”. This unusual look is the result of Tansu’s passion for functionality, which pleases him not only intellectually, but also aesthetically. The luxury yacht embodies, he says, “the elegance of the minimal”.

“I don’t understand why people do huge saloons on boats like this – and on some the saloon is like my grandmother’s house. It should feel like a beach house,” says Tansu. So’mar‘s saloon is compact but bright, with large windows. The forward wall features distressed wood planks and a suitably nautical piece of art – a lightup rope. Furniture is light-toned on the superyacht, accented with turquoise and aqua cushions. Down on the lower deck the full-beam VIP with its massive en suite is big enough to pass for a master, while on the same deck are two twin cabins. The interior décor – by the owner’s wife – is bright and modern, with glossy white bulkheads, sweeps of warm, matt oak and splashes of colour.

“[So’mar’s owners are] always using their yacht in the Med, so all the social life is on the open main deck,’ says Tansu. This space has a bar, with snug rounds of built-in seating and dining leading on to a broad deck. Lighting under the seats and at the bar glances off the glossy white of the superstructure, while teak overheads give a warm, protected feeling.

In terms of performance, So’mar‘s owners wanted economic cruising in the Mediterranean and a 16-knot top speed from their luxury yacht. “Because she is constructed in wood, we were able to reach this speed with two Caterpillar C18s,” says Hans-Maarten Bais, creative director and naval architect at Diana Yacht Design. “Her large beam also provides good stability and seaworthiness.”