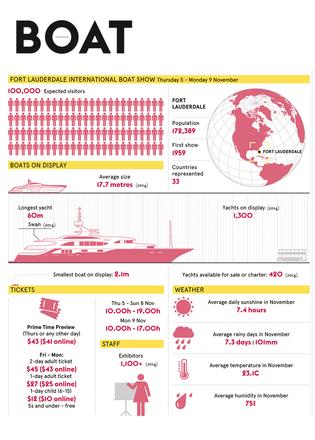 Did you know that 100,000 visitors are expected to flock to the 2015 Fort Lauderdale International Boat Show? That's almost three times the number of visitors to the Monaco Yacht Show!

The handy infographic below breaks down all the key statistics of FLIBS 2015, including the number of boats on display and more about their size, plus the climate and ticket information.

As the infographic above illustrates, there were 1,300 yachts on display at the 2015 Fort Lauderdale International Boat Show. The biggest was 60 metre Benetti superyacht Swan, and the smallest was a 2.1 metre boat. The average size of yachts in FLIBS was 17.7 metres last year. At the time of publication, it was too early to comment on the yachts appearing at the 2015 show.

In its 56th year, the event is a showcase for over 1,100 exhibitors from over 30 different countries.

Anyone attending the 2015 Ft. Lauderdale show may been keen to know that this year is likely to be just as hot as last year: the average temperature in November is 23.1C. With fewer hours of sunshine than MYS (7.4 hours versus 12), the average humidity is 75% and you can expect to see an average of 7.3 rainy days that month.