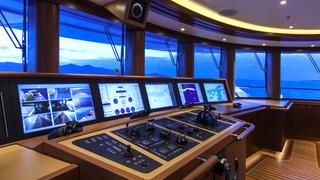 In October 2013, LORAN radio navigation was making a comeback when the U.S. government announced the inevitable - it was ceasing printing paper charts. At the same time, Apple was hard at work on a glitch that made the compass in its iPhone unreliable, while researchers from Trend Micro found that the Automatic Identification System (AIS) is vulnerable to cyber attacks and Russia discovered a new island in the Franz Josef Land archipelago. Ironically, hacking GPS was already old cyber news by then. Indeed, the science of navigation lives in interesting times.

The bad news is you can’t trust your GPS. Not so long ago, GPS seemed the navigator’s silver bullet, especially after President Bill Clinton was finished with it. Clinton signed an executive order that switched off the error built into the U.S. GPS satellite constellation on May 2, 2000, basically eliminating the need for compensation. With the push of an expensive White House pen, Clinton enabled anyone with a standard, off-the-shelf GPS to know exactly where they were, right down to which lane they were driving in on the New Jersey Turnpike. Suddenly, everyone was using GPS, blindly following that faceless voice down country lanes that led nowhere or across rivers that the GPS somehow thought had a bridge. At the time, it seemed that Differential GPS would go the way of LORAN, Decca and Omega navigation systems as a result.

And it seems nobody latched on to GPS and other Global Navigation Satellite Systems (GNSS) like the maritime industry, despite maneuverability becoming ever more restricted by more vessels, larger vessels, wind farms and brand-new islands rising up from a previously empty sea in response to a local earthquake. ‘The maritime world has almost completely adopted GPS,’ says Dr. Paul Williams of the U.K.’s General Lighthouse Authority. The problem is there’s not just one GNSS system — Russia, the U.S., China and France each have one; Europe, India and Japan are developing systems of their own — and all of them are vulnerable to solar flares, jamming and hacking.

All GPS systems are vulnerable to solar flares, jamming and hacking.

Professor Todd Humphreys of the University of Texas at Austin is famous for hacking, or ‘spoofing’, the 213-foot motor yacht White Rose of Drachs to change course on a passage from Monaco to Italy using just $3,000 worth of GPS spoofing gear in June 2013. And to drive home the point, his team repeated the exercise in the middle of the Corinth Canal, positioning the yacht one to two miles in the middle of the Peloponnesian Peninsula.

Whether anybody will spoof a superyacht in anger is open to debate, says Humphreys, but the U.S. government, after losing an ultra-secret Lockheed Martin RQ-170 Sentinel UAV to Iran in 2011, seems to be listening.

Unlike spoofing, you know when jamming is happening to you. You can buy a GPS jammer online for as little as $50. Almost nothing strikes fear in the hearts of today’s modern bridge team than the words ‘Dead Reckoning activated—Press cancel to continue’ flashing on their nav system screen. Imagine that happening in fog around the Bosphorus or the Golden Gate Bridge.

The victim of a 16-day GPS jamming attack by its seldom-friendly neighbour to the north, South Korea wants a backup ASAP. The British recently had an epiphany related to the English Channel and the prospect of jamming the GPS on the 600 ships transiting every day.

Even AIS, the system that gives a ship name to that dot on your radar screen, is vulnerable to cyber attacks. It also relies on GPS as it exchanges position, course, cargo, origin, destination and vital stats with nearby vessels. In fact, in a clone of GPS spoofing, it turns out hackers can disable your AIS altogether and create fake contacts, even lights and buoys. They also can set off fake SOS, man overboard, or closest-point-of-approach alarms.

Recently, an oil tanker sanctioned by OFAC, managed to pass through the Gulf of Oman using an identity number that matched that of a smaller tanker, which was not on the OFAC blacklist, allowing it to ‘disguise’ itself.

The goal is accuracy, availability, integrity and continuity, and the IMO mandates that e-navigation must be resilient.

Enter eLORAN. ‘The goal is accuracy, availability, integrity and continuity, and the IMO mandates that e-navigation must be resilient,’ observes Dr. Williams. Led by the General Lighthouse Authorities of the U.K. and Ireland, the U.K. Department for Transport approved seven differential eLORAN stations along the south and east coasts of the U.K. to provide alternative position, navigation and timing (PNT) information should GPS fail. They’re expected to be operational by the summer of 2014.