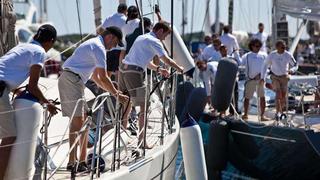 Given the sheer complexity and size of todays superyachts, sailing without the help of professional crew is not an option. Most owners are not even qualified to command their own yachts  and to do so would lead to insurance cover being withdrawn should there be an accident with the owner at the wheel.
As with any shore-side role, crewmembers service is governed both by whatever written or verbal contract of employment has been agreed, and by the wider applicable law. But given the peculiarities of seafarers work  and their historical exploitation  the laws which govern such employment differ in many respects from those which prevail on land.

While the law of the yachts country of registration  the flag states law  regulates employment on board, local port state laws can also have a bearing, especially when an aggrieved crewmember seeks redress.

Many flag states, including all those from the British Red Ensign group, often require crew agreements. These are an official form of employment contract, setting out certain key terms which must be included.

One document suffices for the whole crew, which is signed by individuals when joining and leaving the yacht.

Crew agreements must be approved by the flag state before use, but the officials are not experts in employment law and this can make seeking approval tiresome.

Only the captains terms are a matter of private agreement with his or her employer, which need not be the owner.

The Maritime Labour Convention 2006 (MLC) is a long, detailed document covering the rights and obligations associated with crew welfare, which is likely to come into force at the end of 2011.

It is a sort of seafarers Bill of Rights, setting the minimum requirements for accommodation, recreational facilities, catering, working hours, repatriation and healthcare, welfare and social security provisions. It simply wont be enough to pay crewmembers more in lieu of any shortcomings.

The MLC demands that all crewmembers (including the captain) must be hired on the basis of a Seafarers Employment Agreement (SEA). The SEA must have been signed by the crewmember and the owner or manager, or their representative.

Notably, the owner or managers signature serves to confirm to the crewmember that the other MLC requirements to do with crew living space and conditions have been complied with.

A Maritime Labour Certificate and Seafarers Employment Agreements (SEAs) must contain the following:

Following termination, a document must also be provided containing a record of their employment, which must not contain any statement as to the quality of their work or their pay. It must contain sufficient information to facilitate finding further work or satisfy the sea-service requirements for skills upgrading or promotion. This document cannot be withheld by an aggrieved owner.