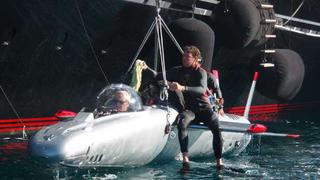 Problems being innovative with a superyacht build

Innovation is important for a superyacht. Theres no harm in a little one-upmanship, and the more modern a superyacht looks when its designed, the fresher its going to look to charterers and potential buyers in the years to come. Yet no matter how advanced a superyacht is, there always remains the fundamental paradox that while architects and stylists usually like to incorporate the latest design cues, naval architecture itself is a predominantly conservative discipline.

The preference is for evolution over revolution: building on experience more than inspiration. This is not surprising given that the basic design of most cargo-carrying ships has not advanced much over the last 30 years, given the technology available.

Many advances in materials are driven by the defence industry. Governments have far deeper pockets even than most superyacht buyers when it comes to research and development. This then provides a pool of innovative concepts and substances into which designers can dip, as and when they (and owners) feel brave enough.

Some technologies are more transferable than others, and there are risks involved, including not only a failure of a particular material, but, for example, the vessels speed not meeting expectations, the fuel consumption being too high, or just late delivery. It could just be that the gloss of a new exterior paint doesn't last.

Some faults may take years to become apparent: fibreglass was originally developed for aircraft during the Second World War and was gradually accepted as a boat-building material in the following decades.

Only some years later did some hydrolytic breakdown (often erroneously referred to as osmosis of the structure or just blistering) become evident. This only happened on smaller yachts as GRP superyachts were many years away, but the risk is still there if the yard conditions, chemicals and techniques arent right.

So how can the adventurous buyer set about building an innovative vessel, while at the same time making sure that the project will be a success and his or her legal position is protected as far as possible?

There are a number of parties, particularly the classification society and the maritime authority in the country where the vessel is going to be registered (the flag state), which will need to be involved early on. The starting place, however, will be with the naval architect and yard.