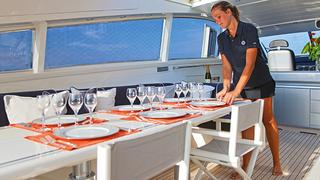 An owners most valuable amenity on board can also be the least reliable: a great crew. Due to tight accommodation, close-quarters living that mixes many different personalities, and busy programmes that dont offer much or any time off, crew are notorious for jumping ship. And because of a lack of regulation, yachting has attracted its share of backpacker types, those looking for casual work to travel the world. All of this means owners have tended to pay top dollar for a constantly rotating, sometimes unqualified workforce. But this has been changing.

In 2008, when the world economy froze, yacht owners cut back and crew were awakened to the reality that starting salaries were dropping while yearly raises and bonuses were disappearing. More and more boats were kept at the dock or put up for sale. Suddenly there was an abundance of experienced crew and jobs werent so easily found. Breaking into yachting as crew was even more difficult.

The easiest cutback was to pull back. Owners decided they werent going to use the boat; they werent going to pay for fuel and would only keep skeleton crew, says Sue Price of Crew Unlimited in Fort Lauderdale, Florida. Everybody in this industry forgets that its our whole life, but a yacht is just the owners toy.

A new reality was setting in and it was time to get serious. Crew had to brush up their skills and improve their certifications to keep their job, or just to bump their CVs to the top of the pile. They were quickly learning that having skills reflected the salary they would earn.

In a manner of speaking, crew were starting to grow up. The industry was becoming a real business. So where does that leave owners now?