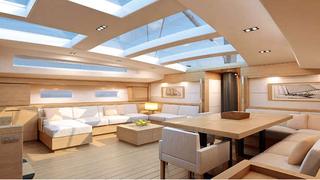 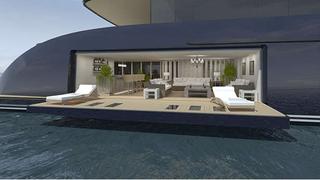 The use of glass on superyachts

Yes, there is far more glass aboard yachts today then ever before, but the glass is still a portal – the access through the structure to the desired view and not the structure itself. Glass is a bit daring; glass is intriguing. There is no other barrier material that connects and separates at the same time. Glass, by its very nature, is unique: neither a solid or a liquid, it is classified by scientists as an amorphous solid.

Considering soaring glass façade skyscrapers such as Dubai’s Burj Khalifa, Taiwan’s Taipei World Financial Center, or The Shard in London, and it’s not surprising that requests for more expansive use of glass are coming fast and furious.

James O’Callaghan of Eckersley O’Callaghan Structural Design, who has designed what are perhaps the world’s most-viewed glass projects – the staircases that are a prominent feature of some Apple stores – says the ultimate goal is an all-glass structure. His glass treads in New York City’s Apple store are 1.8m long and less than five centimetres thick, built of four panels of a laminated DuPont product called SentryGlas Plus.

This is sheet glass formed on an ionomer-based interlayer used for hurricane and bomb-proof applications. Tempered SentryGlas has been accepted by Lloyd’s Register for exterior glass balustrades and windscreens on the Fincantieri cruise ships Ruby Princess and Azura. While a 2005 change in ISO/Lloyd’s rules mandated a switch from simple tempered glass to tempered laminated glass, the previous standard laminate called PVB is 10 kilograms per square metre heavier than the SentryGlas product, which saved 50 tonnes on Ruby Princess.

‘Due to an increasing demand for larger beach clubs, more natural light and a greater connection with the marine environment, we began a project last year to investigate the use of larger glass areas on yachts,’ says Hugo van Wieringen of Azure Yacht Design and Naval Architecture in the Netherlands. ‘Designs with windows from deck to ceiling are appealing, but can cause problems for the strength of the vessel.

‘Our ultimate goal is to use more glass on the superstructure and in the hull; to blur the boundary between interior and exterior spaces,’ he says. ‘Our research has shown that load-bearing glass is not advisable on a yacht due to the dynamic behaviour in a seaway, so our focus has shifted to using glass with an alternative construction method.’

One of the few things glass cannot do is redistribute load. Forces must have a clear load path through glass to structural supports. Even with tempered glass it is important to minimise concentrated loads at connections, so designers must separate glass from metal with a more forgiving material, such as silicon or neoprene. This research has led to some stunning results.