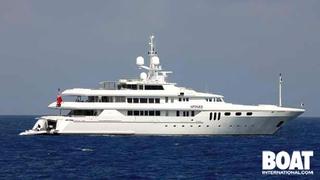 The maker and the distributor of GO2 will visit the Monaco yacht Show to answer questions, in the wake of a sea trial that showed the fuel catalyst reduces superyacht fuel consumption significantly.

The nanotechnology-based diesel combustion catalyst was used onboard 62m Apogee in an independently verified trial, in which the motor yacht achieved an average reduction in fuel consumption of 10.9 per cent. There was also a reduction in unburned fuel of 45 per cent and a reduction in soot, CO2, CO and NOx.

The results indicate that GO2 could offer superyacht owners significant savings, as well as the opportunity to substantially reduce the impact of their yacht on the environment.

The active ingredient of GO2 is its nano-particles, which both contribute and redistribute oxygen within the engine chamber during combustion. GO2 also accelerates the rate of combustion as a result of the catalytic properties of its nano-particles. In doing this, a faster, more powerful, and more complete burn occurs which requires less fuel for the same output by the engine.

The catalyst is now on sale in Europe through fuel efficiency and emissions reduction specialist ECOSuperyacht. The team from both Cerion Energy (the manufacturers of GO2) and ECOsuperyacht will be available at Quai de L’Hirondelle, stand QN3, during the Monaco Yacht Show.