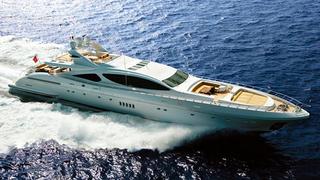 7th Mangusta 165 superyacht set to be launched by Overmarine

Overmarine announced today the imminent launch of the seventh hull of its flagship series, the Mangusta 165, although the news was released during the FLIBS press conference a couple of weeks ago.

The first Mangusta 165 to be delivered in the USA, she has been built for an American owner who is a repeat client. The 49.9 metre motor yacht, like her sisterships, has been designed by Stefano Righini with an interior styled by Overmarine's in-house department.

She is fast too, with a 40 knot top speed thanks to triple 4,609hp MTU engines linked to twin waterjets and a central booster built by KaMeWa.

She will join the series fleet, which includes: