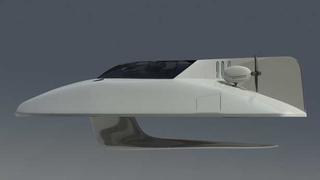 Details of Xi’s mechanics have not been specified, but features include two air propellers on the stern and retractable hydrofoils intended to make it easier to moor the ray-shaped yacht in a marina.

The yacht’s only windows are in the huge cockpit, and consist of a glass roof that when folded away partially transforms the space into a sundeck.

The yacht is the product of thirty years of research into energy by Jan Gielens, a Spanish industrial designer, and is designed to possess excellent aero- and hydro-dynamic properties. Gielens plans to sell the technology it incorporates rather than taking the concept any further.