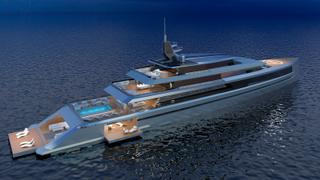 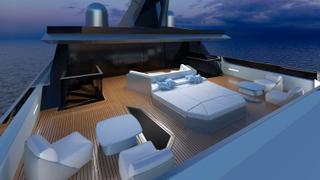 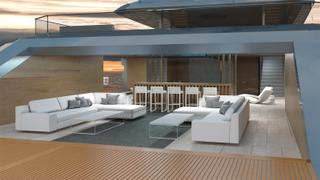 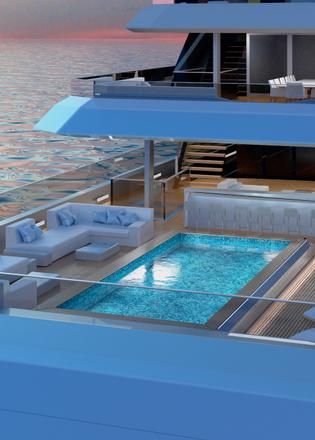 Comfort on board was a key priority in the development of this four-deck superyacht. Sunset’s 13 metre beam allows for plenty of interior space as well as a sizeable superyacht helipad on the foredeck, which measures nine metres in diameter.

Large rectangular expanses of smoked glass would allow plenty of light into the interior, while the straight lines in the superstructure draw the eye to the vertical bow.

The sundeck is one of the areas that has been most thoroughly developed. Crespo explains that the hardtop would feature glass sections that could open automatically to allow for additional ventilation when needed. Moving further forward and this deck also includes a fully enclosed superyacht gym.

On the upper deck aft, guests could gather for an al fresco meal, with room for up to 12 people to dine together around a large rectangular table. Once dinner is over, this space could be quickly transformed for hosting lavish parties.

Take a closer look at the 80 metre superyacht concept Sunset

The main deck aft is also a highly sociable space complete with four sunloungers, two L-shaped seating areas and a bar. However, the star of the show is the superyacht swimming pool, measuring seven metres by three metres and lit up by concealed LEDs.

The final area that Crespo has focused on is the all-important superyacht beach club. Revealed via a folding mechanism built into the gently sloping transom, this spacious area includes two large sofas, another bar and fold-out side balconies.

No further details have been revealed at this stage, but the GA allows for up to 16 guests and 30 crewmembers.