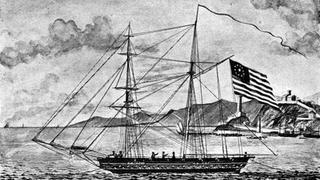 Artefacts from Royal yacht shipwreck to be displayed in Hawaii

Hundreds of artefacts that have been recovered from a royal yacht that was shipwrecked more than 190 years ago are set to be displayed at the The Kauai Museum in Hawaii.

The treasures were on-board Ha’aheo o Hawai’I, which was owned by II the second king of Hawaii King Kamehameha II in the 1820s.

Richard Rogers, a Hawaii shipwreck hunter, worked with scientists from the Smithsonian Institution between 1995 and 2001 to recover the treasures. The yacht was eventually discovered under 10 feet of water and 10 feet of sand.

‘We found gold, silver, Hawaiian poi pounders, gemstones, a boat whistle, knives, forks, mica, things from all over the world, high- and low-end European stuff. Every bit of it is royal treasure,’ Mr Rogers said.

“I found it under a bunch of sand and carried it onto the deck. This was in 1999. I blew it and it made the most beautiful sound going out over Hanalei Bay,” he said. “I thought about how it hadn’t been blown in over 170 years.”

The vessel, which was originally called Cleopatra’s Barge, was built in 1816 and was one of the first private yachts in America. In 1820 King Kamehameha II reportedly paid $80,000 in Sandalwood for the 100ft boat.

While the King was abroad in 1924 the ship ran a ground on a reef in Hanalei Bay but there is some disagreement over why this happened. Some historians suggest that everyone on board the boat was drunk while other reports argue that a strong gale might have been the cause.

All of the artefacts are owned by the State of Hawaii but they had been loaned to the Smithsonian for conservation and study.

In March four crates of the discoveries arrived at The Kauai Museum. It is hoped that all of the finds will go on permanent display once the final two crates have arrived.