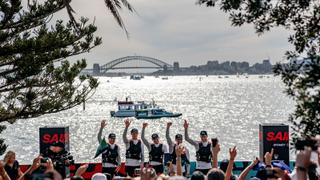 Australia has won the first ever SailGP after two days of high-octane racing on their home turf in Sydney.

Six national teams competed in the inaugural event, racing high performance F50 catamarans - based on the America’s Cup AC50s – that are capable of reaching 50 knots of speed.

20,000 spectators looked on as the Australia SailGP Team, helmed by Tom Slingsby, won the final race of the day. Pre-race favourite Nathan Outteridge and his Japanese team, who were leading going into the final day, lost out on the title in a head-to-head match race.

SailGP CEO Russell Coutts said, “A huge congratulations to Tom, Nathan and their teams. It has been a fantastic event and I want to say thank you to Sydney for supporting the event. It has been a great venue to launch SailGP."

The teams will continue to compete in a series of inshore races in some of the most iconic harbours, culminating in a $1 million winner-takes-all match race.

The next SailGP race will take place in the San Francisco Bay Area from May 4 -5 2019. Strong sea breezes and tidal flows will challenge competitors as they sail between the Golden Gate Bridge and Alcatraz.

SailGP was established in 2018 by serial America’s Cup champion Sir Russell Coutts and Oracle founder Larry Ellison, to increase the sport's mainstream popularity, introduce sailing to the next generation and create a career path for extraordinary athletes.