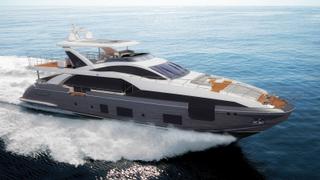 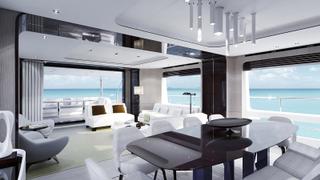 First announced at the 2016 Cannes Yachting Festival and due for a public debut at this year’s Cannes show alongside the flagship Azimut Grande 35M, the 27M also features the same design combination of Achille Salvagni for the interiors and Stefano Righini for the exteriors.

Extensive use of carbon fibre in the superstructure has allowed the designers much more scope to expand the upper deck areas without compromising on the stability of the Azimut Grande 27M.

Accommodation is for ten guests split across five cabins, including a full-beam main-deck owner’s cabin that benefits from extra space thanks to the vertical section of the bow as well as a fold-out superyacht balcony. Meanwhile the compact crew quarters allows for a staff of two people.

The interior décor is available in a choice of three colour schemes: Dolce Vita, Gran Milano and Riviera (pictured below).

The impact of this light and airy design is best seen in the main-deck saloon with its freestanding furniture and floor-to-ceiling windows on both sides.

On-deck relaxation options are plentiful, with a large foredeck seating area and a raised observation deck back aft.

Power will come from a pair of 1,900hp MAN V12 engines that will allow for a top speed of 27 knots. Riding on D2P hull developed by Pierluigi Ausonio, the Azimut Grande 27M will offer comfortable cruising at 24 knots.

Other superyacht projects currently under development at the Italian yard include the second hull in the Azimut Grande 35M series, which was launched earlier this month.