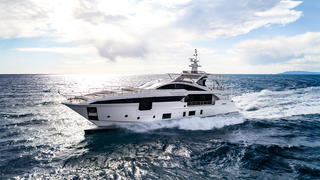 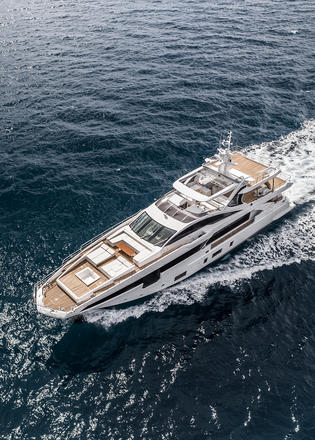 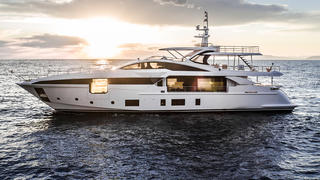 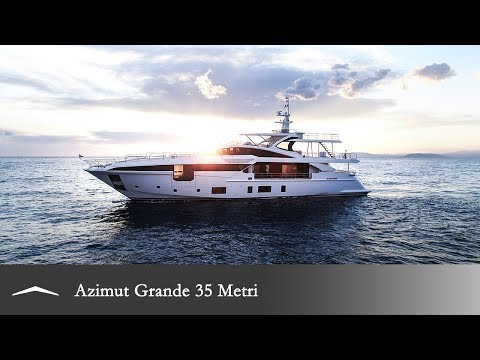 Italian yard Azimut used the recent Versilia Yachting Rendezvous to give a public debut to its new flagship, the Grande 35M. Hull number one was launched earlier this year for a Middle Eastern owner and hull number two is nearing completion, the yard added.

The new 35 metre yacht was first announced in September 2016 at Azimut-Benetti Group’s Cannes Yachting Festival press conference. It has proved to be a hugely popular design so far, with the fifth Azimut Grande 35M yacht sold at Yachts Miami Beach in February.

Exterior styling is by Stefano Righini, while the serene interior décor is courtesy of Achille Salvagni, with an emphasis on flowing lines and classic features that have been reimagined in a contemporary style. Key materials include brass, bronze and stainless steel, while a variety of wood finishes adds interest and texture.

The Italian yard adds that the Azimut Grande 35M features two superyacht beach clubs, one in the stern and one in the trapezoidal bow, which measures 30 metres square, excluding the walkways. This space has been put to good use with a hydro massage spa pool flanked by sofas and sunloungers. This entire area can be hydraulically raised to provide access to the winches and fender racks below.

A side-loading tender garage provides storage for a tender and Jet Ski, leaving the transom free for accessing the water. In a first for this segment of the market, the upper deck will be available with a 30 square metre raised observation deck.

The main deck master suite features floor-to-ceiling glazing and has been fitted out with what Azimut-Benetti claims is the largest fold-out superyacht terrace on the market, complete with pop-up stanchions.

Accommodation is for a total of ten guests, with four more guest cabins below decks, arranged as two doubles and two twins. A spiral superyacht staircase with backlit oynx steps connects all three decks on the Azimut Grande 35M. Meanwhile, the crew quarters is situated in the bow, with room for up to six crewmembers.

In keeping with recent Azimut launches, the Grande 35M will feature a carbon-fibre superstructure for a lower centre of gravity, while the D2P fast planing hull will feature a wave-piercing bow, as seen on the Benetti F125 superyacht series. Extensive noise and vibration reduction measures, borrowed from the aerospace industry, have also been used to ensure a quiet and comfortable ride.

Other projects currently under construction at the Italian yard include the Azimut Grande 27M and the Benetti Delfino 95, both of which are due to launch before the end of the year.