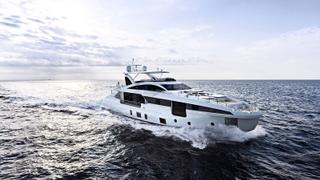 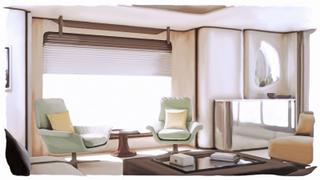 Italian yard Azimut Yachts has revealed new details about its Grande 32M model ahead of its world debut at the Cannes Yachting Festival.

Designer Stefano Righini, who previously designed both the Grande 27M and 35M models, has been handed the exterior styling brief while Achille Salvagni is charged with styling the interior décor.

Righini has focused on crafting powerful exterior lines with stylistic features that sweep towards the stern. Salvagni meanwhile has concentrated on instilling a welcoming, simple and sophisticated feel, sacrificing pure decoration for spatial composition. Key materials include light colour wood varieties which will create a purposeful contrast with polished dark wood.

The yard adds that the 32 metre yacht will feature a spacious beach clubat the stern as well as a lateral garage that can house a five metre tender and three metre Jet Ski.

Accommodation is for a total of ten guests with four guest cabins below decks, arranged into two doubles and two twins. Meanwhile the main deck owner’s cabin feature large windows that will flood it with natural light.

In keeping with recent Azimut launches, the Grande 32M will feature a carbon-fibre superstructure for a lower centre of gravity, while the D2P hull will feature a wave-piercing bow to extend the yacht’s range.