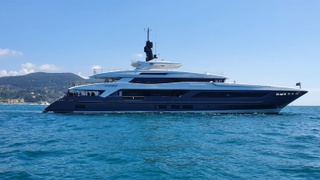 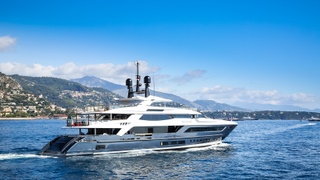 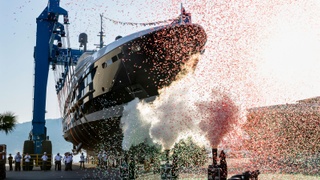 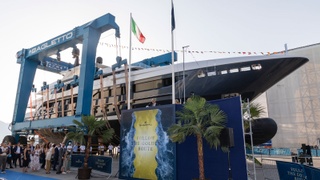 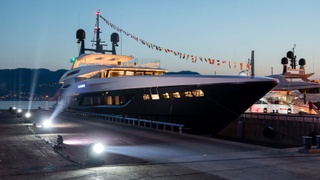 Baglietto delivered its 55 metre yacht Severin's to its owner today, January 21. The yard also revealed the yacht will soon be cruising to the south of France.

It comes after the yacht hit the water for the first time on July 6 in La Spezia and undertook sea trials soon after. The displacement motor yacht from the yard's T-Line range was designed inside and out by Francesco Paszkowski and Margherita Casprini and is the largest yacht to splash since the Gavio Group bought the 165-year-old Ligurian yard in 2012.

"I am very proud to see our shipyard has grown and I am excited for what the future holds," said Michele Gavino, CEO of Baglietto, at the launch. "From all of us at Baglietto, it is a pleasure to see how many of you are here to welcome the launch of our new 55 metre T-Line displacement yacht Severin's."

The yacht was sold to her European owner in 2017, with Edmiston representing the buyer, and has been designed with chartering in mind.

Severin's can sleep up to 10 guests in six cabins, including a spacious master suite and two guest cabins are situated on the main deck. The upper deck features a multi-purpose room which can function as guest cabin, playroom or massage area. Additional features include an indoor lounge with a gaming table and, outside, a ten-guest al fresco dining table, bar and relaxation area aft. The sundeck, which boasts a swimming pool and bar, completes the design of Severin's upper decks.

On the lower deck, a further two guest cabins can be found, as well as the crew's quarters, which include six ensuite cabins and a crew mess near the galley. Tender and toys are stored in Severin's are stored in the foredeck, allowing more space for the dedicated beach club

Standout design features on board include a panoramic, marble-finished lift which transports guests between the yacht's three decks, as well as the extensive beach club amenities, such as a gym, spa, steam shower and bar. Powered by two Caterpillar engines 3516C DITA, she has a cruising speed of 12 knots and can reach a top speed of 17 knots.

Gavino added, "Severin's represents not only our present but our past and our future also here surrounding us. Caroly, 23.66m was launched by Baglietto in July 1948, today she is a training ship for the Italian Navy. Nina J, a fast yacht delivery in 2006, is ready to leave for the summer season after an amazing refit. Superyacht Only One, which was launched in 2015, and Silver Fox, which was launched last year are also here with us. They are all based on the same naval platform as the 48m you see here in the yard."

Gavino also read out a statement from Giovanni Toti, President of the Ligurian region: "Today marks another milestone in the path taken with great commitment in 2012 when the Gavio family took over the company. Severin's is the biggest yacht ever built since then. This is not only an important goal we have reached, but also motivation to grow further and better in the future."