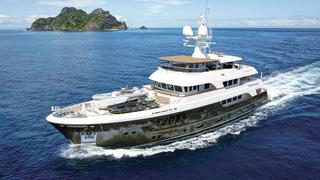 Boat International visited Balk Shipyard in The Netherlands this week, which sees its sheds and slips busy with multiple superyacht refits underway in 2014.

Currently in Balk's sheds are the classic 1930s 22m motor yacht Amazone, which is receiving an engine room overhaul, and a 25m Italian-built motor yacht Nuovo Pensiero in for a extensive refit. Outside, Balk had an interesting specimen in a 33m wooden minesweeper, which is undergoing a complete restoration and a rebuild with a new deckhouse. The Sparkman & Stephens-designed Royal Huisman 25m sailing yacht Ebb Tide, launched in 1986, is also receiving repairs and new facilities.

'There is a great deal going on at Balk and we are pleased that our yard has come through the turbulence of the recession in good order,' says managing director Daan Balk. 'With a team of around fifty highly skilled employees Balk has proven that it has the flexibility to manage all sorts of rebuilds and refits. Winning the World Superyacht Award was the icing on the cake for our yard, especially as we have been nominated a number of times in the past. We are looking forward to the future with confidence and welcome enquiries from across the superyacht industry.'

In addition to refits, Balk creates superstructure parts for other major yards. This includes its Dutch neighbour Heesen, for which Balk is finishing its fifth major project. Next up is creating a new bow for the 41.3m Heesen Seven Sins, which is part of a larger extension project. Stay tuned as these projects progress at Balk.