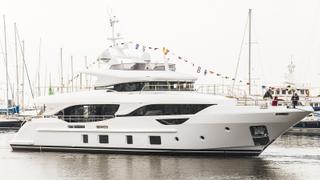 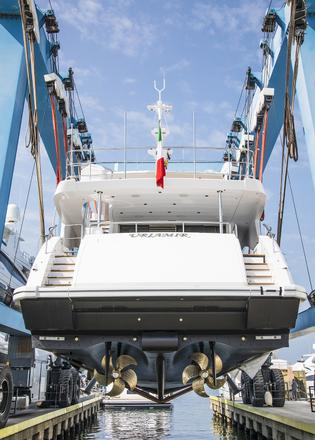 Italian yard Benetti has launched the second hull in its Delfino 95 range of motor yachts, which has been named Uriamir.

The follow-up to hull number one Christella II, which was splashed in December 2017, this 28.95 metre yacht was built to RINA standards from a GRP hull and a carbon fibre superstructure. Designer Giorgio M Cassetta created the exterior lines for the range, which builds on the success of the outgoing Delfino 93.

Accommodation is for up to ten guests split across four cabins, including a main deck owner’s suite, complete with his and hers bathrooms and walk-in wardrobes.

Below decks, Uriamir has been fitted with two double cabins and two convertible twin cabins with sliding berths and Pullman bunks. What’s more, the three-cabin crew quarters is suitable for a staff of up to five people.

The interior décor has been customised to suit her owner’s preferences, with alternating use of light and dark coloured materials, such as tay and tanganika wood as well as various types of marble.

Other key features include a drop-down television in the lounge, a superyacht spa pool on the foredeck and a 4.4 metre tender garage.

Power comes from a pair of 1,000hp MAN V8 engines for a top speed of 14.5 knots. When trimmed back to her economic speed of ten knots, Uriamir will boast a cruising range of 2,400 nautical miles, drawing on a total fuel capacity of 20,000 litres.

Benetti adds that she will be going on display at the next month’s Versilia Yachting Rendezvous, shortly before delivery to her owner.