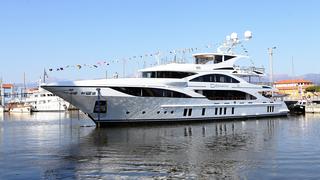 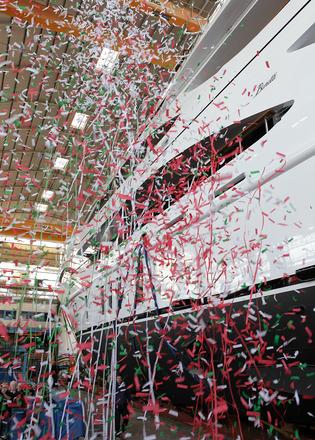 Benetti FB 701 has been launched and is now named Domani, following a ceremony at its Viareggio yard in Italy.

Domani is the fourth yacht commissioned by her owner, who is an experienced sailor that loves to cruise with his family. She’s been built to sustain extensive use by his family.

The 45 metre displacement superyacht is built in steel and aluminium and will be pushed to a top speed of 14.5 knots, and a cruising speed of 13.5 knots, by her two Caterpillar C-32 engines.

Domani’s owner collaborated with Benetti on the design of the yacht, beginning with the first sketches of the project right through to her launch.

Her exterior design and naval architecture was completed in-house, with interior design by Carlo Galeazzi. One of Domani’s design highlights is the sky lounge on the upper deck. A full height and width glass door allows guests in the sky lounge to overlook the outdoor area, creating an indoor-outdoor effect.

Domani can accommodate 10 guests in five suites. The owner’s cabin features a balcony and is designed to give a feeling of space and luminosity.

She was built on the technical platform FB700 to reduce the delivery time.

Most of the details about Domani are a closely guarded secret, with the yard promising to reveal more information about her later this year.