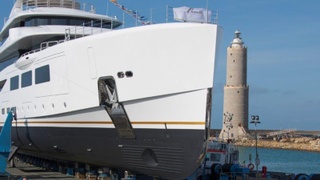 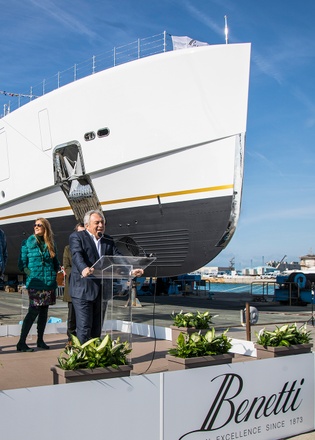 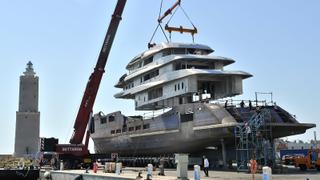 Benetti has launched its 70 metre custom yacht FB273 in Viareggio.

The yacht features a steel hull and aluminium superstructure with exterior design penned in-house in collaboration with the owner.

Key exterior features include a "futuristic stern" with two side doors and a "variable geometry swimming pool". Elsewhere, FB273 features a vertical bow, "touch and go" helipad and a Jacuzzi on the Sky Deck.

Large sunbathing areas are also a key feature throughout, with sofas and armchairs on the light-filled living area forward of the stern.

The Laura Pomponi-penned interior accommodates 12 guests in six double cabins across six decks. The upper deck is dedicated to the owner, with outdoor access and an interior stairway. The 120 square metre cabin sits at the bow with a walk-in his and hers wardrobe and "breakfast corner". The suite also includes a private lounge overlooking the touch and go helicopter pad on the bow.

Elsewhere, the owner's deck includes an outdoor lounge area, a cinema and an office connected to the lobby. Leading from the lobby is a gym, complete with a massage room. The crew quarters meanwhile sits on the lower deck at the bow.

An al-fresco dining area sits on the sun deck connected to an "interior veranda". The captain's cabin sits next to the bridge while a Jacuzzi, sunpad and loungers adorn the top Sky Deck.

Power comes from a pair of 2,400hp Caterpillar C32 engines that will allow for a top speed of 17 knots. When trimmed back to her cruising speed of 12 knots, FB273 boasts a maximum range of 5,000 nautical miles, drawing on a total fuel capacity of 132,000 litres. .